But the number of people living with HIV grew 25% during that same period.

Last year, governments donated $7.8 billion in funds to battle HIV in low- and middle-income countries, which represents a $200 million reduction from the previous year and is nearly the same amount from a decade ago, according to a new report from Kaiser Family Foundation (KFF) and the Joint United Nations Programme on HIV/AIDS (UNAIDS).

The decline is mostly a result of the United States decreasing its funding, according to a KFF release about the report. However, in 2019, the United States donated $5.7 billion, making it the largest donor relative to its size. Other leading donor countries include the United Kingdom, at $646 million donated; France, at $287 million; the Netherlands, at $213 million; and Germany, at $180 million. 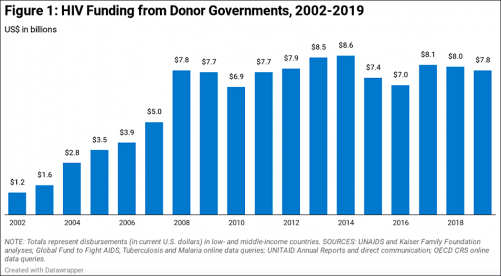 The funds include donations to local governments, nongovernmental organizations and the private sector as well as contributions to The Global Fund to Fight AIDS, Tuberculosis, and Malaria, UNAIDS and Unitaid.

The full report, titled Donor Government Funding for HIV in Low- and Middle-Income Countries in 2019, can be found at the KFF website here. Key findings of the report include:

“Every dollar not invested today contributes to AIDS-related deaths and new HIV infections,” said Winnie Byanyima, executive director of UNAIDS in the press release. “In a world characterized by massive inequalities we must ramp up investments for realizing the right to health. It’s a shared responsibility, demanding more donor funding and domestic resources, including freeing up fiscal space through debt cancellation.”

“Donor governments continue their move away from funding HIV programs in low- and middle-income countries, while the number of people living with HIV continues to grow,” added KFF senior vice president Jen Kates. “This situation is likely to become more precarious in 2020 and beyond, as the effects of COVID-19 hit donor government budgets and take an increasing toll on health and economies around the world.”