As HIV Rate Stabilizes Among Gay and Bi Men, Their Undiagnosis Rate Falls

However, the CDC estimates that Latino men who have sex with men and MSM 25 to 34 years old have been contracting HIV at increasing rates.

The HIV epidemic has been improving among men who have sex with men (MSM) overall in recent years. Their estimated infection rate has leveled off at about 26,000 new cases annually, and a decreasing proportion of MSM living with the virus are unaware of their infection. However, concerningly, estimates of recent infection rates among Latino MSM and MSM 25 to 34 years old have followed an upward trajectory.

In December 2015, the Centers for Disease Control and Prevention (CDC) reported similar news about HIV diagnosis trends among MSM. Now, further CDC research has yielded estimates about annual infection rates, known as HIV incidence, among MSM. (An incidence estimate tries to pinpoint when people actually contracted the virus rather than looking at data about when individuals were diagnosed, which for some may be years after infection.)

The CDC’s Sonia Singh, PhD, presented findings from this new research at the 2017 Conference on Retroviruses and Opportunistic Infections (CROI) in Seattle. 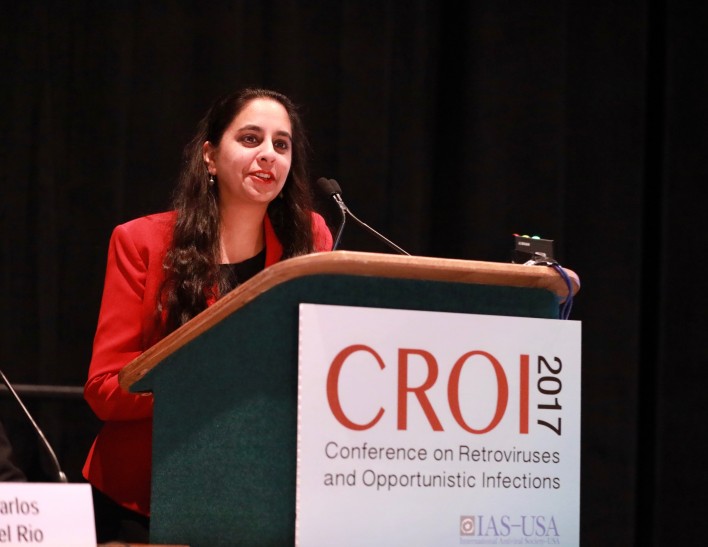 Sonia Singh of CDC at CROI 2017 in SeattleBenjamin Ryan

The researchers used data from the National HIV Surveillance System on HIV diagnoses among MSM, as well as data about individuals’ first CD4 test result after their diagnosis to help the investigators estimate HIV incidence and prevalence (the total number of people living with HIV) and the percentage of undiagnosed infections among MSM between 2008 and 2014. To make their calculations, they used a mathematical model that charts the drop in CD4 cells among people with untreated HIV over time. This helps researchers estimate how long individuals with newly diagnosed HIV have had the virus.

This study period predates the widespread use of Truvada (tenofovir/emtricitabine) as pre-exposure prophylaxis (PrEP) among MSM. Truvada was approved in 2012 but at first it was rarely used and only started to gain in popularity at the end of 2013. Nevertheless, Singh did say at CROI that the CDC believed that PrEP’s use may have contributed to the reduction in HIV incidence seen in this research.

HIV prevalence increased among all racial groups during the study period. This trend has an element of good news, because it in part indicates that people are living longer lives with the virus.

The estimated percentage of HIV-positive MSM who did not know they had the virus dropped in each racial group during the study period. In 2014, an estimated 20.4 percent, 20.9 percent and 12.5 percent of Black, Latino and white MSM living with HIV, respectively, were unaware of their infection.