How AIDS Ends: An Anthology from San Francisco AIDS Foundation

The first man cured of HIV shares his experiences in a book excerpt.

Although the first cancer specialist I saw had a gut feeling that it wasn’t anything serious, a bone marrow biopsy yielded a diagnosis of acute myeloid leukemia. That was a bigger shock than finding out I had HIV. I was leery about going to the hospital, because my partner had been treated badly there after telling the nurses he had HIV. So the doctor made calls instead to a hospital linked with Berlin University—and he happened to get Gero Hütter on the phone. Gero said, “Send him over!” So I found out I had leukemia, and the next day I was in the hospital receiving chemotherapy.

Dr. Hütter was young, and in medical school he had learned that people with a certain genetic mutation, called CCR5-delta-32, are essentially immune to HIV because their cells lack an entry point for the virus. Before my third round of chemo, I’d had blood taken for a possible stem cell transplant to cure the leukemia, and Dr. Hütter found an unusually high number of matches for me. That gave him an idea: Why not look for a CCR5-negative donor? Would those stem cells essentially grow me a new immune system, uninfected with HIV?

…For people who receive stem cell transplants, the day of their transplant is called their “birthday.” On February 7, 2007, I had my first birthday. Three months after that, tests showed no sign of HIV in my blood. Dr. Hütter asked me if I would do a colonoscopy so they could look for signs of HIV in colon tissue; they didn’t find any.

That’s when I started to hear the word “cured.”

…But “cured” doesn’t mean “done.” I’m still a guinea pig, because I want people to learn from my experience. Just last week, I had a colonoscopy on Wednesday and gave blood on Friday. I’ve had about 15 bone marrow biopsies—the most painful thing in the world! I recently met a researcher who told me he has 6,000 of my blood cells in his lab fridge. Pretty weird, but pretty amazing.

…I’ve been asked to speak at meetings around the world, and I’ve seen my story give people a lot of hope—researchers pursuing a cure, after years of being afraid to even use the word, and people who are themselves living with HIV. It’s given scientists an idea of what’s possible. In fact, there are trials happening right now with gene therapies that are trying to prompt the CCR5 deletion, but without the painful and risky procedures I had. This approach gives me hope; I think gene therapies will be a big part of the answer to finding an end to HIV and AIDS, and to curing other diseases.

And because I want to be simply the first—not the only—person cured of HIV, I started the Timothy Ray Brown Foundation, the first organization in the history of the epidemic to focus exclusively on finding a cure. To mark my upcoming fifth “birthday,” I plan to hold the foundation’s first board meeting. 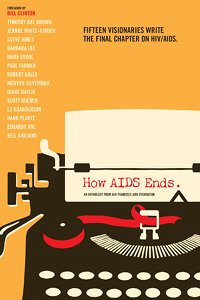 How AIDS Ends—an anthology by San Francisco AIDS Foundation (SFAF) with a foreword by President Bill Clinton—is being released for World AIDS Day and is available on Amazon.com. Contributors include Timothy Brown, Jeanne White Ginder, Cleve Jones, Barbara Lee, Mark Dybul, Paul Farmer, Robert Gallo, Mervyn Silverman, Diane Havlir, Scott Wiener, LZ Granderson, Hank Plante, Eduardo Xol and Neil Giuliano. They share their perspectives on the HIV/AIDS epidemic, their visions for how it ends and who they will remember when that day comes. The digital book will be available through Amazon and other online retailers for 99 cents. All proceeds from the book will support the free HIV prevention and care services of SFAF.