How to Save a Life

In February, New York City’s Iris House celebrated both National Black HIV/AIDS Awareness Day and its own 20th anniversary. To commemorate the dual event, Iris House, which provides HIV/AIDS services to women of color and their families across the city, launched a new print and social media campaign to announce its latest campaign: “How to Save a Life.”

Here, POZ goes over Iris House’s latest plans to serve those living with and at risk for the virus throughout the greater New York City area.

1. Iris House will continue to fight full-force against the virus among women in NYC’s communities of color.


Since its foundation in 1994, Iris House has evolved into a wide range of holistic programs based at four community centers across the city, fighting the virus at the grassroots level. Nutrition programs, HIV support and education, testing and HIV prevention, as well as outreach on the streets help Iris House clients and their families connect and work toward healthier lives together.

Although the desperation from the early days of the epidemic has diminished, Iris House staff members say HIV prevention and treatment efforts are, in many ways, more important than ever. Hence the title of Iris House’s new campaign: “How to Save a Life,” which aims to both prevent and treat the next wave of the epidemic.

“In our communities, we talk about relationships, but not about sex,” said Ingrid Floyd, executive director of Iris House.

In order to face the virus head-on, she says, the organization will ignite new conversations on a personal level within urban communities of color.

“How to Save a Life” brings up five different conversations through five themes, each representing a distinct facet of NYC’s at-risk community, and each theme containing its own posters and outreach. The overall campaign targets mothers, positive women, families and men who have sex with men (MSM) of color, offering them messages of HIV testing, prevention and treatment.

“It Starts With Kindness” “Courage Required” and “Because Moms Are Too Important” palm cards aim to inspire women of color to help prevent and treat HIV.Courtesy of Iris House

2. Iris House has sought out new, powerful partnerships to help it with the “How to Save a Life” campaign.

to host its anniversary/kickoff event for the campaign. Lucas says she joined the effort because in many ways her career and Iris House’s missions in the black community have overlapped.

“Unfortunately, you can not discuss relationships without talking about HIV,” says Lucas, who launched her HIV advocacy career by writing about the nitty-gritty of modern sex at Essence magazine. “We had to get involved and take the initiative when no one else was.”

Iris House will work with Lucas to help promote the campaign throughout the city and online via her blog.

MBA students from Rutgers University in New Jersey have also joined Iris House’s cause by helping design the new campaign’s posters and by formulating a marketing and outreach plan for its messages. 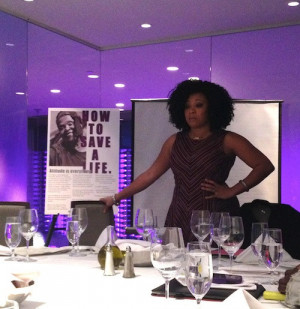 3. Iris House will be taking a much more “upbeat” approach to its HIV outreach during the next year.

David Speigel, one of the Rutgers students, describes the campaign’s messages as “remarkably upbeat” compared with other HIV awareness campaigns out there today.

“This is about living, not dying, and I think that’s something different,” he explained. The new campaign will tie in to the many positive approaches Iris House takes every day at combatting the virus in NYC communities.

For example, “feel-good outings” and workshops promoting life skills and are at the core of Iris House’s services. The organization plans to reach out to churches, colleges, AA programs, community leaders and others to help spread its updated positive outlook on the virus.

Simply looking at the P.S. notes included on the bottom of the campaign’s posters—“Don’t Forget to Smile,” “You Are Not Alone” and “Keep It Fun!”—shows how Iris House is helping its community face the virus in an optimistic way. 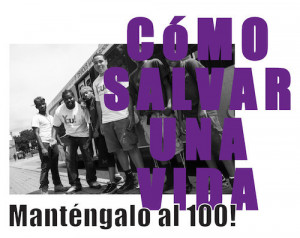 With its new campaign, Iris House will expand its outreach efforts among young black and Latino men who have sex with men.Courtesy of Iris House

4. With the new campaign, Iris House is also expanding its disease prevention game.

In addition to the new campaign, Iris House has recently made a number of exciting announcements about its plans for the future.

First, it will expand its services beyond the five boroughs to New Jersey.

Second, Iris House will improve its focus on a few new demographics. “How to Save a Life” campaign posters will be available in both English and Spanish at Iris House events and community outreach efforts from now on.

In addition, the organization is hoping to expand its reach beyond women and their families and to focus more on young black and Latino MSM. The series of posters with the tagline “Keep It 100” conveys this goal. So do Iris House’s new MSM field teams that put messages of testing and prevention out in the gay community.

The poster with the slogan “Attitude Is Everything” represents another Iris House expansion: to help clients with other health disparities, including diabetes, hepatitis C and hypertension.

“We’re expanding in the hopes that HIV/AIDS will be defeated,” explained Michael Barret Jones, Iris House’s director of development. Addressing coinfection and other serious health concerns in the community will help lay the foundation for this.

Iris House will be debuting its campaign around the community and on social media during the next few weeks. Visit Twitter and Instagram to check out more posters and activities regarding “How to Save a Life.”