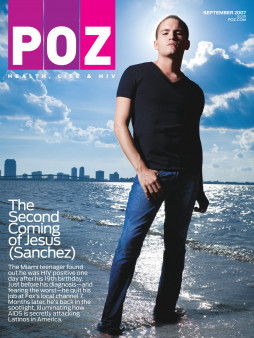 Jesus “Jesse” Sanchez decided he wanted to be a TV correspondent in third grade, when Jim Berry, a Miami sportscaster, ducked into Bowman Foster Ashe Elementary for Career Day in 1996. “I thought he was so cool, even though I didn’t like sports,” says Sanchez, now 19, who recognized his destiny as a broadcasting phenom—covering the likes of Jennifer Lopez, though, not Peyton Manning.

It was the camera Sanchez craved, and craves still. Sanchez, who is Cuban-American on both sides of his family, has the kohl-rimmed eyes of a cat and honey-colored skin. He’s forever freshening his MySpace page with new shots of himself, open-shirted on the beach or in his car, or pressed up against young women in supertight tops and high heels. TV is like MySpace but even better, Sanchez figures. “When you’re on TV, people admire you,” he says.

Sanchez’s first chance to sparkle on-air came in high school, when he read the morning news on his campus TV station (a gig that helped him win “best smile” senior year). Then, this past winter, Miami’s Fox affiliate, WSVN-TV-7, hired the Miami Dade College freshman for an overnight newswriting shift. “My producers saw I had a natural talent for writing,” says Sanchez. “And they loved my presence.” Why? “Because, trust me,” he says, tongue only partly in cheek, “I am unforgettable.”

The Channel 7 job, helping put together the broadcast of Today in Florida before journalism class each day, lasted only a month. In February, he came down with a high fever and a strange rash. After a couple of misdiagnoses, his doctor suggested an HIV test, but before even taking it, Sanchez quit his job.

“I just knew right away [it was HIV],” says Sanchez. “When I resigned, I used excuses like ‘It’s too far [to drive]; it’s not enough pay,’” he says. “But the truth is that I had started doing the research and reading about HIV. My intuition told me, ‘You’re sick.’”

It was a difficult decision. “I had worked so long and hard, from the first time I stood in front of a camera in middle school,” he says. “But it was time for me to go.” A first HIV test indeed came back positive and on March 5—the day after his 19th birthday—a second test confirmed the diagnosis.

Sanchez says he had sex without a condom many times—as recently as January, though he can’t quite pin down his exposure to one particular night or guy. His partners were older men whom he rarely saw more than once. “I only date men who are over 30,” he says. “Usually they’re career-oriented, successful”—a power dynamic that can put the eager-to-please teen at a disadvantage when the other man wants to skip the condom. Sanchez says he learned plenty about HIV in high school but also admits that he felt “invincible” before testing positive. “When people told me it can happen to you, I was, like, ‘Ha ha, that’s not me.’” Melíz Martin, a chum since middle school who is one of a coterie of beautiful straight girls Sanchez calls friends, says, “I told Jesus on numerous occasions, ‘Something could happen to you, because you’re being totally promiscuous.’”

Did he know the risks? “I knew everything—100 percent—about HIV,” says Sanchez, who, as an aspiring member of the broadcast media, was attuned to the HIV prevention campaigns on South Florida radio, TV and billboards. “I was ignoring it,” he says. Sanchez describes himself as a vulnerable teen, too carried away by romantic yearnings to be careful about HIV. “I’m very confident in my looks, but my self-confidence [is lacking],” he says. “I need guys to like me.”

Whatever his longings for male attention, it was to women that Sanchez turned for help. Melíz remembers: “He was devastated for a week.” She and his other girlfriends did overtime at one Starbucks or another around Miami, trying to answer the question “Why me?” Says Sanchez, “When I first found out, I would wake up pissed off. I wanted to know: Why would anyone do this to me?” His Mom—with whom he shares a home, along with her boyfriend of 10 years, in the Miami suburb of West Kendall—provided support too. (Not to mention the new car she gets him every year.) She was shaken but firm on one point: “The order of things is, You bury me, I don’t bury you.” Sanchez was back to being fabulous in no time, beaming on his MySpace page in Dolce & Gabbana shades, answering the phones at a new real estate office job, visiting the tanning salon and digging into his schoolwork. “Now I take responsibility [for getting HIV],” he says. “I live with the consequences.”

Among the consequences, he has decided, is a duty to reach out to others. Sanchez is ready to be an HIV spokesperson; he pictures himself on a speaking tour talking to other teens about safe sex. “I think positive people are a social club who should get the word out—through coming out, getting involved and preventing new members from needing to join this club,” he says. It’s a reality-TV twist that might have been expected: Sanchez intends to put his charm to use against HIV.

The charm—“the Jesse effect,” as Melíz calls it—is hypnotic, but not at first, she says. “Most people who don’t really know him think that he is conceited, superficial and airheaded. However, he is very caring and puts others before himself. People don’t realize there is more depth to him than collecting this season’s sunglasses in every color.” Most of Sanchez’s dates, he says, miss his depth because all they want is sex. “I want to meet someone who is interested in a relationship or something serious,” he says. The problem is that he requires such constant attention that he inevitably pulls in the wrong type.

Also, the Miami nightclubs where Sanchez usually meets men aren’t the best sources of steady boyfriends. “The clubs are 18-and-over so there are a lot of hookups with younger kids and older men,” says Yuri Velasquez, an HIV teen counselor at the University of Miami Division of Pediatric Infectious Disease & Immunology. “It’s easy [to get HIV] here in Miami, because this is a party city.” Indeed, experts say the HIV rate among Miami teens is markedly rising.

Before his diagnosis, Sanchez didn’t know guys like himself who had HIV—or even talked about it. “I realize that [I might not have gotten HIV] if maybe someone who was my age had told me, ‘Hey, this can happen to you, don’t be stupid. Don’t be so naïve!’”

Nor does Sanchez have gay teenagers for friends or lovers—and he doesn’t particularly want any. “The young gay guys, they hate on you,” he says. They discriminate against “feminine” men, he says, just like the straight boys in fifth grade PE class who called him a fag. (“I’m not the butchest thing ever, but I’m not a flamer,” says Sanchez.)

Ever since seventh grade, Jesse Sanchez has been given a hard time—on the street, at school—for being gay and so absolutely beautiful. This harassment is the main theory he offers up for his aggressive yet sunny attitude. “I think I’m trying to show the world that no matter what, no matter my sexual orientation, I can do anything I want, whatever you put in my way.”

But he’s been loved to the extreme as well. Sanchez’s mother is “super cool,” he says, about both his HIV status and his sexual orientation—though she wishes he wasn’t always so public about everything. “Your business is yours and the world doesn’t need to know,” she told him. And the adoration of his friends kicked up to a whole new level when they saw how he handled his diagnosis. “I would have freaked out,” says Olivia Alvarez, a Miami Dade classmate. Instead, she says, “I need him more than he needs me.”

That seems to be one of Sanchez’s secrets: making sure he’s needed. In the weeks after his diagnosis, feeling so much better in both body and soul, he checked in with his former Channel 7 coworkers to see how much they missed him. He rang a producer and told him he’d tested positive for HIV. The producer told him, “Come back.” The next time there’s an opening for an overnight newswriter, Sanchez will get a call.

He’s not expecting the smooth future he might have had without HIV. “As a journalist, especially on-air talent, people want to trust you. And people might not feel confident about me now that I’m out and positive, because HIV has such stigma. Or they’ll criticize my work: ‘Oh that fag, he has HIV.’” His goals haven’t changed, though. “I want to look perfect,” he says. “I want to be perfect.” And that’s a wrap.