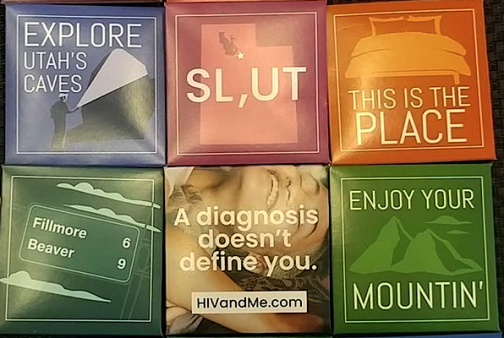 Will these Utah-branded condoms get distributed? Instagram/@matrixgj17 via the Utah Department of Health

“He does not approve the use of sexual innuendo as part of a taxpayer-funded campaign.” But you can try to change his mind!

UPDATE: The Utah health department said it will destroy the 40,000 condom packages but will then distribute the prophylactics, reports the Salk Lake Tribune on January 21. Other aspects of the HIV prevention campaign, including the HIVandMe.com website, will be reinstated.

The governor of Utah halted the distribution of condoms branded with icons and phrases of that state, reports CBS-affiliated KUTV. The move caught the eye of AIDS activists, who are now urging the public to support the HIV prevention campaign.

The controversy started on Monday when the state health department launched its new “The H is for Human” campaign to raise awareness about HIV. Part of that effort includes condoms in sleeves branded with risqué twists on Utah-centric phrases and locations. A few examples: 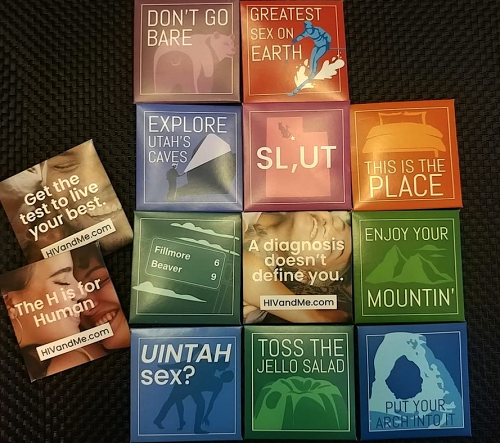 They’re clever, right? But are they appropriate? Not according to Governor Gary Herbert, who ordered an end to the condom distribution just two days after the launch. A statement from his office clarified:

“The Governor understands the importance of the Utah Department of Health conducting a campaign to educate Utahns about HIV prevention. He does not, however, approve the use of sexual innuendo as part of a taxpayer-funded campaign, and our office has asked the department to rework the campaign’s branding.”

The Utah Department of Health, which said the campaign was inspired by efforts in Alaska and Wyoming, followed up with this statement:

“The Utah Department of Health apologizes for the offensive packaging included on condoms distributed as part of an HIV campaign. The designs did not go through necessary approval channels and we have asked our partners to stop distributing them immediately. We regret the lewd nature of the branding.

“We remain committed to running a campaign to help in the prevention of HIV and intend to do so in a manner that better respects taxpayer dollars, and our role as a government agency.”

Not everyone agrees with the decision to stop the condom distribution. Activists with the Prevention Access Campaign, known in the HIV community for spearheading the Undetectable Equals Untransmittable (U=U) campaign, urge fellow advocates to support the Utah condom campaign by calling the governor’s office (800-705-2464) or taking to social media using #HIVandMe #UAF and #UTDOH, @GovHerbert and @UtahDepOfHealth.

Michael Sanders, an activist with the Utah AIDS Foundation, believed the condom packaging would catch people’s attention and raise awareness for the HIV campaign and its related website, HIVandMe.com.

“We needed to have something that was provocative, yet thought-provoking and fun,” Sanders told KUTV. He also pointed out that the campaign is funded by federal grant money, not state money.

Does that mean the condoms can be distributed after all? Not according to KUTV, which reports that state departments operate at the discretion of the governor. That does not mean, however, that other aspects of the HIV campaign—“The H is for Human”—are in danger of being shut down. Not even those in Fillmore and Beaver, Utah.