Lil Nas X shows a whole lot of love for folks with HIV. First, his hit debut album, Montero, which dropped in September, is raising funds for 15 groups fighting the epidemic in the South—over $100,000 so far—then, during a trip to his hometown, Atlanta, the pop star paid a visit to AIDS service organizations, including the Ponce de Leon Center at Grady Health; He Is Valuable, Inc.; and the headquarters of THRIVE SS, which stands for Transforming HIV Resentments Into Victories Everlasting Support Services, a group for same-gender-loving men of color living with HIV.

“It was so cool,” recalls THRIVE SS executive director Larry Walker. “It reminded me that yes, money does a lot, but visibility and representation are just as important, as is seeing yourself as real and valid and essential to culture.” 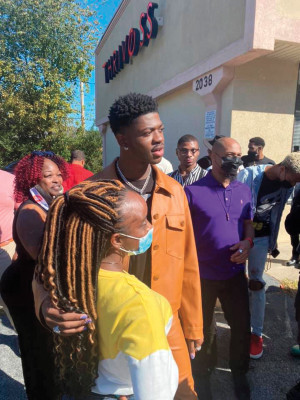 A bona fide Black gay pop icon—“He’s our Beyoncé!” Walker adds—Lil Nas X, né Montero Lamar Hill, ruled the past year with a steady stream of hit singles, controversial videos and click-worthy clapbacks to haters (earning him a spot on the 2021 POZ 100, which celebrates Black HIV advocates). Having someone of that caliber stop by your space and tell you and your staff that you’re doing a great job, Walker says, boosts morale and gives you the energy to persevere.

So what happened during the visit? Folks—from long-term HIV survivors to young men new to the community—formed a big circle and introduced themselves. They shared with Lil Nas X details about themselves and also how much it meant that a pop star like him exists today, and Lil Nas X asked them about the work they do and how HIV impacts the community. “He was truly engaged in what we’re doing,” Walker recalls. “He wanted to learn and know why HIV plagues our community so much.” 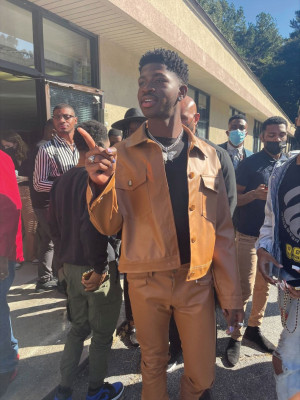