Periodic infusions of such antibodies may eventually become a new way of treating the virus.

An early trial of periodic infusions of long-acting HIV antibodies has raised hopes of a future in which the virus can be effectively suppressed with such therapy without the need for daily antiretrovirals (ARVs).

Publishing their findings in Nature, researchers enrolled 15 people in this Phase Ib study who were living with HIV in their viral reservoir that tests indicated was sensitive to a pair of potent monoclonal broadly neutralizing antibodies to the virus. Previous research had indicated that these particular antibodies, known as 3BNC117 and 10-1074, showed promise as potential forms of treatment for HIV.

Researchers gave the study participants, all of whom were initially receiving fully suppressive standard ARV treatment, infusions of both antibodies, 3BNC117 and 10-1074. Then, two days later, the investigators put the participants on what is called an analytical treatment interruption (ATI), during which they were taken off their ARVs and closely monitored.

The study members then received additional infusions of both antibodies three and six weeks after starting their ATI. The infusions were generally well tolerated.

In previous studies, scientists have given HIV-positive participants infusions of a single antibody, as opposed to a pair of antibodies as in the current study. The use of one antibody was not associated with suppression of HIV because some of the study participants’ virus developed resistance to the single antibody they received. So in theory, just as combinations of ARVs are used to treat the virus, attempting to treat HIV with multiple antibodies at one time may help ward off the emergence of drug-resistant strains of the virus.

Indeed, this early trial of the pair of antibodies, which target different regions on HIV’s surface, demonstrated promising results.

Eleven people completed the study. Among them, nine experienced full suppression of HIV while off ARVs for between 15 weeks and more than 30 weeks and for a median of 21 weeks. (As would be expected, once the level of antibodies in the body dropped below what the researchers considered protective levels, the participants’ HIV rebounded.) None of these nine individuals saw their virus develop resistance to both of the antibodies. However, in six of the seven people who experienced viral rebound before the 30-week mark during their ATI, their virus did show signs of resistance to 10-1074, but not to 3BNC117.

Two of the participants still had a fully suppressed virus at the end of the 30-week study.

As for the two participants who did not achieve viral suppression as the other nine study members experienced, the investigators found that this pair of people harbored HIV that was in fact resistant to at least one of the antibodies used in the infusions. These two people experienced a viral rebound before they hit the 12-week mark after stopping their ARV treatment.

The researchers concluded that this study suggests that, as with standard combination ARV treatment, multiple combination antibody infusions may be able to suppress HIV so long as the level of such antibodies in the body remains above the protective threshold and the individuals receiving such treatment do not harbor virus that is resistant to such antibodies.

“A safe, reliable antibody-based treatment regimen would open new possibilities for people living with HIV,” Anthony S. Fauci, MD, director of the National Institute of Allergy and Infectious Diseases (NIAID), said in a press release. “This study represents an important, early step towards that goal and, importantly, helps establish that a combination of broadly neutralizing antibodies to HIV can safely suppress the virus in certain individuals without the apparent development of viral resistance.”

A Phase I study is already enrolling an expected 40 participants with HIV who will receive an optimized regimen of 3BNC117 and 10-1074.

For information about the new Phase I antibody study currently enrolling approximately 40 participants, including a contact for inquiring about such participation, click here. 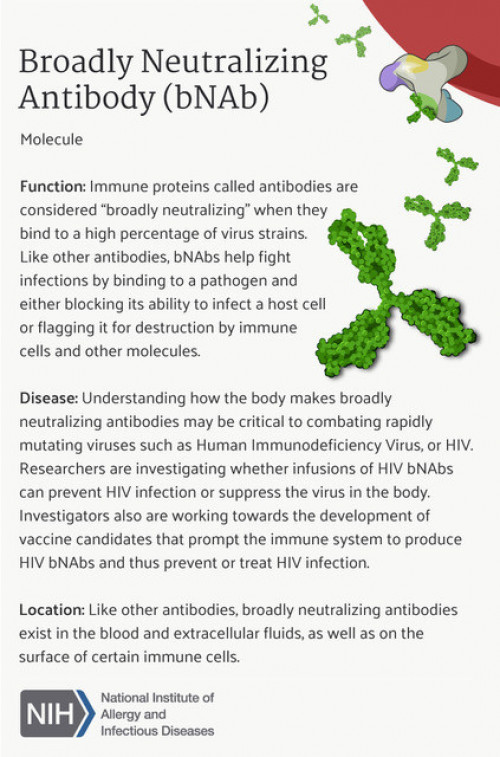