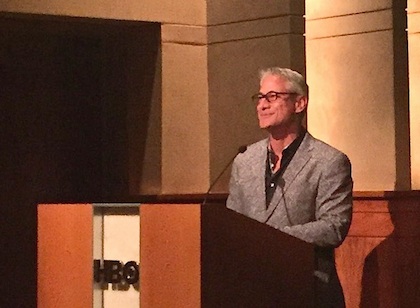 Greg Louganis at the HBO screening of “Back on Board.” Source: @pozmagazine on Instagram.

Olympic diver Greg Louganis became a household name when he won gold medals in 1984 and in 1988—which was also the year the diver famously hit his head on the board and bled into the water. The athlete made more headlines when he came out as gay and HIV positive. And he makes another media splash August 4, when HBO airs Back on Board: Greg Louganis, a documentary about his complex and controversial life.

“When I came forward about my HIV status with Barbara Walters and Oprah, there was a lot of debate going on and I bore the brunt of criticism,” Louganis told Time magazine in a recent Q&A. “I didn’t mind that, because people were talking. All of those people who cheered for me during the Olympic Games can no longer say their lives have not been affected by HIV/AIDS. And so it really got people to think and talk about this issue and bring some focus to it.

“That’s one thing that [the documentary] really illustrates. When it shows me in 1988, an atomic bomb could have gone off and I wouldn’t have known it. But at the same time, ACT UP was happening, and people wanted people with HIV/AIDS to be tattooed and quarantined. That was a lot of people’s mentality.”

Louganis said that when he retired after the 1988 Olympics, he didn’t expect to live to age 30 because HIV at that time was considered a death sentence. But today, he has a different attitude. “People always ask, ‘How are you doing? How are you doing really?’ But my viral load’s undetectable, my T-cells are higher than they’ve ever been. I do acupuncture and Eastern treatments as well,” he said. “Now I’m 55, and I’m here, and I’m married. It’s unbelievable. I never dreamed this day would be possible.”

And to read Louganis’s opinion piece in POZ about his documentary, click here.