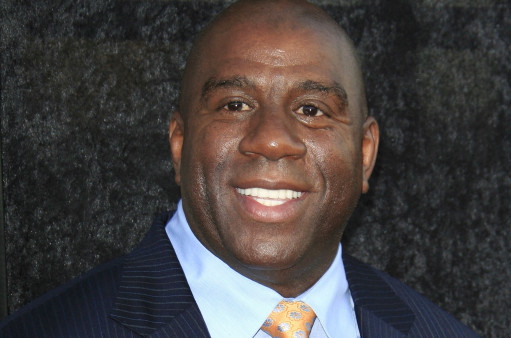 Conspiracy theorists ignore Magic Johnson’s own words: “I am certain that I was infected by having unprotected sex with a woman.”

We loathe to give conspiracy theories any attention for fear of spreading misinformation, but we must set the facts straight once again about Magic Johnson and HIV: The iconic athlete did not contract HIV from a contaminated hepatitis B vaccine during a study trial conducted by Anthony Fauci, MD.

“I am certain that I was infected by having unprotected sex with a woman who has the virus,” Johnson wrote in a November 1991 article for Sports Illustrated that The Associated Press references in an article this month. “The problem is that I can’t pinpoint the time, the place or the woman,” he added. “It’s a matter of numbers. Before I was married, I truly lived the bachelor’s life. I’m no Wilt Chamberlain, but as I traveled around NBA cities, I was never at a loss for female companionship.”

To repeat the facts: Magic Johnson did not contract HIV from a contaminated hepatitis B vaccine. Misinformation about this is deliberately spread online by conspiracy theorists who deny the proven effectiveness of vaccines, specifically the shots that protect against COVID-19. Propagandists also aim to discredit the work of scientists such as Fauci, the recently retired head of the National Institute of Allergy and Infectious Diseases known as America’s doctor. Not only did he lead the country through the COVID-19 pandemic, relaying the latest scientific data and promoting vaccines, but he also guided national health and research efforts through the AIDS epidemic.

Basketball icon Johnson stunned the world on November 1, 1991, when he announced, at the height of his stardom, that he was retiring from the NBA because he was HIV positive. You can watch that dramatic press conference below:

In November 2021, Johnson marked the 30th anniversary of his public disclosure with press interviews and public statements, tweeting: “God has really blessed me! Today marks 30 years living with HIV so the message resonated with me in such a tremendous way. I thank the Lord for keeping me, giving me strength, and guiding me for 62 years but especially the last 30.”

Over the years, he has used his fame to advocate and educate about HIV issues, and when COVID first struck the nation in March 2020, Johnson publicly urged people to view the coronavirus as a real health threat. “I’m here today to tell all minorities: You can get this virus, and you can die from it,” he said at a CNN town hall. “Do everything you’re supposed to do. Stay at home. Keep yourself a safe distance from everyone.” (For more on that, see “Magic Johnson on the Parallels Between COVID-19 and HIV.”)

Currently, there are no vaccines against HIV, though effective treatment has been available since 1996. Scientists have been researching HIV vaccines for decades, leaving many people to wonder how COVID-19 vaccines were developed in record time. For an exploration of that topic, read the POZ feature “A Shot in the Dark” along with “HIV Vaccine Shows Promise, but Much Work Remains,” an update about a recent experimental trial.

There is, however, a vaccine for hepatitis B virus (HBV), which causes inflammation of the liver and can lead to death. Universal immunization of infants began in 1991 in the United States, and cases of hep B have decreased dramatically since then. Last month, the Food and Drug Administration approved a new hepatitis B vaccine that is even more effective and confers immunity sooner.

Although HIV can be spread through sharing needles and syringes, that is not how Johnson contracted the virus. To learn more, visit the POZ Basics on HIV and AIDS, notably the section about HIV Transmission and Risks. That section reads, in part:


There are several ways this can happen:

• From sharing needles, syringes or other injection equipment with someone who has HIV, while not using PrEP.

• From mother to child during pregnancy, childbirth or breastfeeding. However, if the mother is in regular care and on HIV treatment, this risk is reduced to nearly zero.

• From being stuck with a needle or cut with a sharp object that contains HIV-positive blood. This is mostly a risk for health care workers.

• From getting a blood transfusion. However, this risk is rare in the United States.

• Are bitten by a mosquito or any other bug or animal.

• Are near a person who is HIV positive and sneezed.

• Eat food handled, prepared or served by a person who is HIV positive.

• Share toilets, telephones or clothing with a person who is HIV positive.

• Share forks, spoons, knives or drinking glasses with a person who is HIV positive.

• Touch, hug or kiss a person who is HIV positive.

• Attend school, church, restaurants, shopping malls or other public places where there are people who are HIV positive.

In the United States, sexual contact is the most common way that HIV is passed from person to person. Sex allows for the exchange of certain body fluids that have consistently been found to transmit HIV: blood, semen and rectal and vaginal secretions. HIV has also been found in extremely low, noninfectious amounts in other fluids (saliva, tears and urine), but no transmissions through these fluids have been reported to the Centers for Disease Control and Prevention.