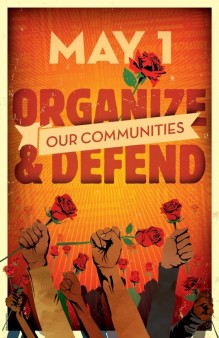 On May Day, HIV Groups Voice Support for Immigrants and Sanctuary Cities

You can sign the statement and “stand united with others who are fighting for their lives.”

A group of HIV organizations issued a joint statement May 1 to show community support for immigrants’ rights and for sanctuary cities. You can join the effort by signing the statement from the Counter Narrative Project, HIV Prevention Justice Alliance, the Positive Women’s Network-USA (PWN-USA), TransLatin@ Coalition, Treatment Action Group, the U.S. People Living with HIV Caucus and Venas Abeirtas.

“HIV organizations have by and large stayed silent on immigration-related affronts to human dignity, even as the first 100 days of this administration have put the safety and lives of millions of residents on the line,” reads the statement before it lists a series of threats and attacks on immigrants. “For immigrants living with and vulnerable to HIV, the stakes are even higher. For many, deportation could spell death. Some moved to the U.S. specifically in order to access life-saving treatment and health care unavailable in their home countries. Others faced sexual violence and exploitation during the very process of migration, which increases vulnerability to acquiring HIV. Still others left their homes fleeing oppressive anti-LGBT sentiment, violence and policies, and could face persecution or death if deported.”

The statement explains how law enforcement and the prison system within the United States put immigrants at risk of HIV, violence and exploitation.

“As people living with and affected by HIV,” the statement concludes, “we are used to fighting for our lives, along with the crucial support of our allies. Now is the time for us to stand united with others who are also fighting for their lives, understanding that our struggles are not distinct from one another, and that our fates are inextricably intertwined. History will judge us severely if we pretend otherwise through our words, actions – or silence.”