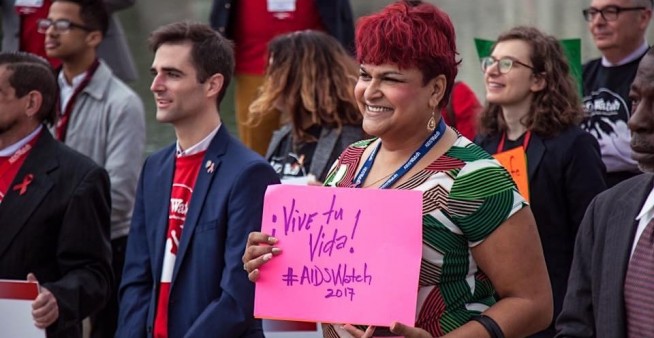 A Call to Support Immigrants Targeted by Hateful Policies and Rhetoric

HIV groups ask: If Silence=Death, where is the HIV community’s voice resisting the war against immigrants in the United States?

Borders are imaginary political lines drawn to consolidate power and resources. They divide and separate communities and families, protecting and favoring those already holding power — and those who seek to retain it at any cost. Borders denote those who allegedly “belong to” a society, and those who do not. Citizenship and immigration status are virtual walls used to marginalize and subjugate individuals, defining who does and does not deserve access to basic human rights including health care, housing, labor protections, and food.

In 2018, American imperialism is in its greatest struggle in history to make borders “real” to protect white supremacy at grave cost to immigrant communities, especially women and LGBTQ immigrants. The United States — a nation built on the genocide of indigenous peoples, on the backs of enslaved Africans and by the creation of arbitrary borders to control movement and protect power and wealth — often fails to acknowledge the immeasurable contributions of diversity, beauty and culture from immigrants, particularly those who are not white.

Now, the Trump Administration has declared war on immigrants, with weapons including ICE raids and mass deportations; multiple versions of a ban on Muslim people from entering the U.S.; the knee-jerk decision to end the Deferred Action for Childhood Arrivals (DACA) program; termination of Temporary Protected Status for numerous African, Asian, and Latin American countries; intentional separation of children from parents and caregivers; an escalation of hateful, xenophobic rhetoric from the highest halls of power; and a punitive proposed rule from the administration that would make immigrants fineable or deportable for accessing public benefits.

Immigrant people have been targeted in the most vulnerable of settings, when seeking access for abortions and other reproductive care; applying for asylum; seeking healthcare for children and other loved ones. Anti-immigrant rhetoric has had demonstrable negative consequences for immigrant mental health and appears to be leading to a reduction in willingness to seek HIV prevention,healthcare services, and basic services needed for survival.  Several immigrant people living with HIV are currently detained and being deported in widely publicized cases.

Immigrant people have always been vulnerable to human rights violations related to a systemic lack of political power and representation, exploitation, discrimination, language barriers and cultural differences. Yet in the face of this recent onslaught of attacks, the national HIV advocacy community has remained largely silent on its commitment to immigrants living with and vulnerable to HIV, who may be rendered voiceless as a consequence of electoral structures and from fear of repercussions.

As HIV organizations who have fought hard for relative access to the halls of power, it is our duty to stand in solidarity with immigrants today. Normalization of fear, shame, stigma, and silence is a legacy the HIV community must never forget. We can no longer authentically use the rhetoric of Silence=Death if we ourselves remain silent in the face of inhumanity against those who are most marginalized. We must marshal our full resources, voice and political power in support of immigrants targeted by hateful policies and dangerous, dehumanizing rhetoric. No human being is illegal.

We call on the HIV policy and advocacy community to visibly stand against the myriad human rights violations that oppress and harm immigrant and migrant communities. Since MayDay 2017, several HIV organizations have developed language and policies to provide sanctuary for immigrants. This MayDay, the HIV community must commit to elevating our presence in the immigration fight. What can this look like?

In Solidarity and Action:

Resources can be found here.

To read a Spanish version of this statement, click here.