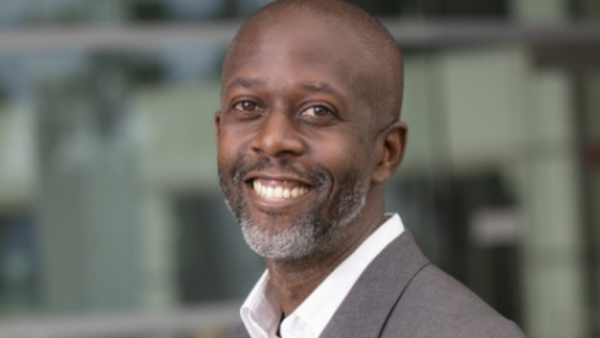 Ace Robinson is the CEO of PCAF, an HIV service provider in Tacoma, Washington. Courtesy of pcaf-wa.org

Ace Robinson, who has over 20 years of experience in health work, is the first Black gay man to lead PCAF.

PCAF, an HIV organization in Washington State, has introduced its new CEO. Ace Robinson, a global HIV strategist and health care quality leader, took over the foundation in July. He is the first Black queer man to serve in this position during PCAF’s 35 years.

With offices in Olympia and Tacoma, PCAF is the leading HIV organization in South Puget Sound, which has the second highest HIV rate in the state. In the video below, PCAF clients share their experiences at the organization:

Black people are disproportionately affected by HIV. And Robinson hopes to address the barriers that keep people from accessing lifesaving antiretrovirals. In the press release, Robinson recalled a Black lesbian client at an HIV program he served in Philadelphia; she had stopped taking her medication because of the stigma against people with HIV, a choice he referred to as “passive suicide.”

“What happened to her is far too common,” Robinson said. “My primary goal is to strategically align resources within South Puget Sound and beyond to improve not only the HIV-related health, but also the holistic wellbeing of our community. We will uplift the voices of excluded communities to provide new and innovative resources to dismantle the systemic structures that have prevented so many from achieving better health outcomes.”

In a Q&A on PCAF’s website, Robinson explained what he is most looking forward to in his new role.

“Making the impossible possible,” he said. “PCAF sits in a geographic region that is not eliminating its highly impacted populations due to gentrification but is actually increasing its population of historically unserved people due to regional pressures on housing, food and job security. It will be exciting to meet the community’s needs in real-time and to work hand-in-hand with staff, volunteers and the board of directors to find an innovative way forward.”