Members of the Human Rights Campaign at the Walk to End HIV. Photo courtesy of Noël Gordon Jr.

In 2013, the Human Rights Campaign (HRC) decided to ramp up its public education and outreach efforts around HIV. Two years later, HRC’s HIV and Health Equity Project was born. At the forefront of this team, which consists of about 14 individuals across the LGBT advocacy group, are Noël Gordon Jr. and Marvell L. Terry II.

“I like to think of myself and Marvell as the co-quarterbacks leading the team of people who do work on HIV at HRC,” says Gordon, senior program specialist for HIV prevention and health equity, who was instrumental in expanding HRC’s mission to more specifically address HIV and other LGBT health issues. 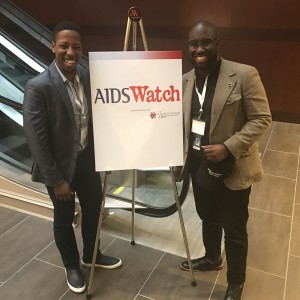 Although Gordon and Terry arrived at HRC a couple of years apart, they shared an interest in HIV advocacy. Now, they work closely together as HRC’s only full-time staff members focusing on HIV.

“What brought me to advocacy was my own diagnosis,” says Terry, who learned he was HIV positive in 2007. “When I arrived here, I made a commitment to myself that I would never forget the process I, too, went through of looking into care and the struggle I had of retaining care.”

He continues, “Daily, I show up as a Black gay man living with HIV from the South. The greatest opportunity for me is the eagerness to bring that voice into my HIV work and into the Human Rights Campaign.” Terry currently serves as the HIV and AIDS program manager.

Gordon’s interest was both professional and personal. While a student at the University of Michigan, he took a trip to Kingston, Jamaica, where he did direct education work with people at high risk of contracting HIV. The transformative experience led him on a path to advocacy around issues concerning HIV.

“I also identify strongly with the fact that the communities most affected by HIV are Black gay and bisexual men,” Gordon says. “As a Black gay man, even though I am not living with HIV, I feel a deep sense of passion and a desire to change the course of this epidemic.”

The HIV and health equity team has three goals: to educate LGBT people and allies about the current realities of HIV; to mobilize them to combat the dual epidemics of HIV and HIV stigma; and to advocate for the dignity, rights and well-being of people living with and affected by HIV.

As part of its educational efforts, the organization teaches people about available prevention options, including the daily blue pill Truvada as pre-exposure prophylaxis (PrEP). HRC even invested in two social media campaigns, #BeInTheKnow and #DailyBlue, to raise awareness about the HIV prevention pill.

“In October 2014, HRC became one of the first national LGBTQ organizations to publicly embrace the use of PrEP and to call on major stakeholders to increase PrEP access, education and resources,” says Gordon.

When it comes to mobilization, HRC travels to more than 200 Pride festivals across the country to engage with individuals about their sexual health and wellness in an attempt to normalize discussions around HIV.

The advocacy group also publishes a number of publications and resources, including its Safer Sex for Trans Bodies guide and What Do I Do? A Handbook to Understanding Health and HIV, which Gordon says are the ones that make him proudest.

“What Do I Do? was our first major HIV-related publication out of the HIV and health equity shop,” says Gordon. “We worked with AIDS United to produce a guide that really filled two needs that we did not see in literature. At the time that we published the guide, we did not see a resource centered around HIV and the health-related needs of LGBTQ people.” 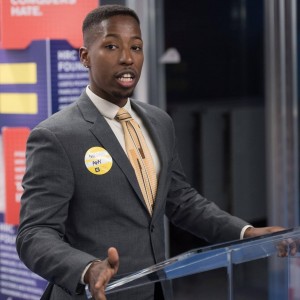 Gordon adds that neither was there a resource that took into account the current realities of HIV or that discussed the virus in simple terms. Since its publication, HRC has sent about 15,000 copies of What Do I Do? to different organizations across the United States.

While Gordon focuses on prevention, Terry leads treatment efforts. Terry says, “My sole mission is to change hearts and minds around HIV/AIDS.”

Terry also helps integrate HIV into every department at HRC. For example, he works with the manager of the historically Black colleges and universities (HBCU) program to ensure that students at those institutions are educated about HIV and have access to PrEP.

“It is through our Children, Youth and Families Program that we try to talk about HIV in grade school,” Terry explains. “It is through our policy and legal team that we have conversations around criminalization and the impact of HIV laws in various states. It’s a daily cross-spectrum approach of where you find opportunities.”

Terry was also the driving force behind the HRC Foundation’s HIV 360° Fellowship Program, which is currently in its second year and receives funding from the Elton John AIDS Foundation. The program provides 10 young HIV advocates with nine months of training and support to address communities most heavily impacted by HIV.

Terry, who started The Red Door Foundation in 2007, explains that the fellowship came about from his own struggles as a young leader of an organization in the South.

“We wanted to find young people under age 35 who were in leadership roles who needed the skills building, capacity building and, more than anything, the network of other people who were doing the same thing,” Terry says. “I brought all of those experiences and needs that I knew that I needed or that helped me to write a grant for the fellowship program.”

According to Terry, the program has been a financial, emotional and mental success for the fellows as evidenced by the fact that they have built encouraging networks and made their programs stronger through their improved leadership. 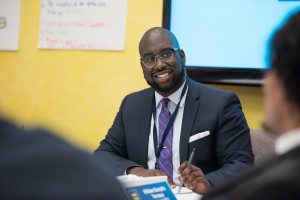 Although HRC has reached out to young people on the front lines of the epidemic, Gordon says one of the biggest challenges moving forward is bringing all the energy and enthusiasm young folks are feeling in the wake of the recent election into the effort to end HIV.

The Trump administration presents another challenge to HIV advocacy, he says, but that hasn’t deterred him. “I believe we will persevere and weather these storms of uncertainty we now find ourselves in,” he asserts.

Besides, he noted that HRC is “going full throttle” to ensure that HIV is not left out of the conversation—especially regarding health care—by marching, addressing members of Congress and joining forces with other organizations to create a unified voice.

Terry believes it is important to let the current administration know that “LGBTQ people are here, and we are here to stay.”

HRC is also looking toward the future. In the next year, the organization is hoping to focus its efforts on HIV and faith.

“We believe we can’t address HIV in communities of color without talking about the role of faith communities in perpetuating but also providing a safe haven from homophobia, transphobia and other forms of bias,” says Gordon.

Two other areas of focus will be the South, where the epidemic has the most people living with HIV, and advocacy issues related to HIV, such as drug pricing and discrimination.