So far, it appears that people on antiretroviral treatment with well-controlled HIV do not have worse monkeypox outcomes.

As monkeypox continues to spread in Europe and North America, mostly among gay and bisexual men, much remains to be learned about its impact on people living with or at risk for HIV. So far, it appears that people on antiretroviral treatment with well-controlled HIV do not have worse outcomes.

In the United States, the Centers for Disease Control and Prevention (CDC) has reported 72 confirmed cases of monkeypox in 17 states and Washington, DC, as of June 14, including 15 cases each in California and New York. Worldwide, the World Health Organization (WHO) has confirmed 1,285 cases in more than two dozen countries where the virus is not endemic as of June 10. The United Kingdom, Spain, Portugal, Germany and Canada have reported the most cases outside Africa.

The monkeypox virus is transmitted from animals and from person to person through close contact. This can include skin-to-skin contact, kissing and contact with contaminated clothing or bed linens. It also can be transmitted through respiratory droplets at close range, but it does not spread over longer distances like the coronavirus that causes COVID-19. It is not known whether monkeypox is sexually transmitted in semen or vaginal fluid, but it can spread via contact with sores during sex.

While anyone can contract monkeypox through close personal contact, most people affected by the outbreak in non-endemic countries are gay, bisexual and other men who have sex with men. Many of them reported recent international travel, and many visited saunas or attended large events, including a Pride festival in the Canary Islands. 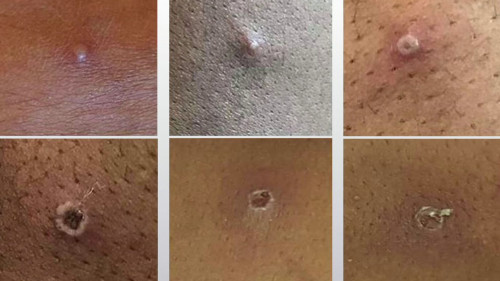 Most people with monkeypox recover without treatment, and so far there have been no confirmed deaths in the current outbreak. But the sores can leave scars, and people with more severe disease may develop complications. Severe outcomes are more common among children, pregnant people and immunocompromised people. Vaccines and antiviral medications used to prevent and treat smallpox are also effective for monkeypox.

There is a dearth of data on monkeypox among people with HIV. Previous studies in Africa found that people with uncontrolled HIV had worse outcomes, including larger and longer-lasting lesions, more complications and several deaths, but those with well-controlled HIV appear to fare better.

“Currently, we do not recommend any specific actions for people with HIV beyond vigilance about clinical presentations and history of exposure,” the British HIV Association said in a rapid statement. However, the organization suggests that people with a CD4 count below 200, persistent detectable viral load or a recent HIV-related illness should be considered at higher risk.

In the United States, Demetre Daskalakis, director of the CDC’s Division of HIV/AIDS Prevention, declined to say whether any people diagnosed with monkeypox are HIV positive, citing patient confidentiality concerns. The CDC has not yet issued monkeypox guidance for people living with or at risk for HIV.

The U.K. Health Security Agency (UKHSA) has reported the most detailed information about monkeypox among gay and bi men in the current outbreak. As described in a recent technical briefing, epidemiologists interviewed 45 diagnosed men with known or suspected links to transmission in gay sexual networks through May 25.

Nearly all reported sex with other men, and 20 reported group sex, during the monkeypox incubation period; 20 reported more than 10 sex partners during the past three months. Further, 20 men reported attending sex-on-premises venues, such as saunas, dark rooms or sex clubs, in the United Kingdom or abroad. About a quarter reported having sex in other cities or with people who are not U.K. residents.

A majority of the men (27) had been diagnosed with an STI during the previous year, but most (32) were HIV negative. All of the men living with HIV were on antiretroviral therapy, and more than 90% had an undetectable viral load. Of the 32 HIV-negative men, 29 were linked to sexual health services for HIV pre-exposure prophylaxis (PrEP).

Epidemiologists do not know how long monkeypox has been circulating in Europe and North America, and they are not sure whether it has spread beyond social and sexual networks of men who have sex with men.

Many gay and bi men routinely monitor their sexual health and seek care for unusual symptoms, but cases may be missed in populations that are less vigilant. Because many men at risk for monkeypox have links with sexual health clinics, these can be good settings for offering education, testing, vaccination and treatment. Sex venues and Pride events are also potential settings for targeted interventions.

While acknowledging the need to target education and resources to the communities most affected, experts and advocates emphasize that monkeypox is not a “gay disease”—anyone can get it through close personal contact—and many fear that the association with gay men could trigger the same kind of stigma that surrounds HIV.

“Stigma distorts science,” Daskalakis said during a recent monkeypox forum hosted by InterPride. “Monkeypox can potentially affect everyone, but we need culturally appropriate information to reach networks that are experiencing increased transmission right now. Pride is a great way to get messages out—we’ve been using it for decades to get out information about HIV and STIs.”

Experts urge anyone who develops symptoms suggestive of monkeypox—and gay and bi men in particular—to seek care and get tested. Remember that the rash may be subtle, with only a few lesions and no accompanying flu-like symptoms.

Testing and contact tracing are key strategies for containing disease outbreaks, but monkeypox testing is currently limited. Some 70 state laboratories can test for orthopox (the virus family that includes smallpox and monkeypox), but a monkeypox diagnosis must be confirmed by the CDC. Some advocates are calling for more widespread testing—for example, at clinics that test for STIs and at community venues and events.

Individuals diagnosed with monkeypox are urged to cooperate with contact tracing efforts but, as the UKHSA briefing notes, this can be difficult when people have sex with casual or anonymous partners. Tracing all contacts encountered at large gatherings is also a challenge.

People with monkeypox should isolate and avoid close contact, including sex, for three weeks. Cover sores with clothing or bandages. Wash clothing, towels and bed linens in hot water; and disinfect surfaces that come into contact with sores. Although it is not clear whether the virus is transmitted in semen, UKHSA recommends using condoms for eight weeks as a precaution. Monkeypox is infectious until the sores heal completely and scabs fall off.

People who think they might have been exposed to monkeypox should self-monitor for symptoms for three weeks—the maximum length of the incubation period—ideally avoiding sex and other close contact during that time.

Some basic precautions can help prevent monkeypox transmission. If you feel ill, refrain from close contact, including sex, and public gatherings. In crowded settings where skin-to-skin contact can’t be avoided, long sleeves and long pants reduce exposure. Wash your hands frequently. Avoid sharing sex toys and personal items such as toothbrushes. Because the virus can be transmitted through respiratory droplets during face-to-face contact, a well-fitted mask may help prevent transmission. However, the virus is not transmitted through the air over longer distances, such as during a casual conversation or when passing someone in a grocery store, according to the CDC.

Monkeypox can be contained through ring vaccination, or targeted vaccination of close contacts. The United States maintains a large stockpile of an older smallpox vaccine (ACAM2000), but this can cause side effects, especially in people with compromised immunity or skin conditions. A safer nonreplicating vaccine (Jynneos, also known as Imvanex and Imvamune) was approved in 2019, but it is currently in short supply. Several countries are employing this strategy for high-risk personal contacts and health care workers. Quebec province in Canada is offering the vaccine to men who have had sex with two or more men during the past two weeks. But experts do not recommend vaccination for the general population.

With Pride season in full swing, most experts and advocates are not recommending canceling events or closing venues where people have close contact, including sex. But some are calling on LGBTQ organizations to do more to get the word out.

I think the #LGBTQ community needs to step up its game now on monkeypox. We have the chance to contain this outbreak in our community, but we have to act swiftly, decisively and put all our resources to this task. https://t.co/3CVl0z6adQ

“Everyone needs to step up their game. This is an all-hands-on-deck moment,” longtime HIV activist Gregg Gonsalves, now an associate professor at Yale School of Public Health, said on Twitter. “We have the chance to contain this outbreak in our community, but we have to act swiftly, decisively, and put all our resources to this task.”