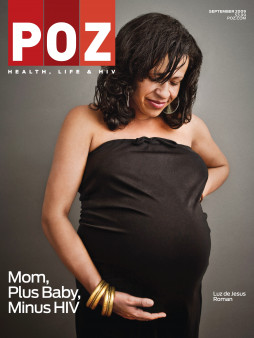 Mother Plus Child Minus HIV

Diagnosed with HIV in 2004, Luz de Jesus Roman knows all too well that HIV disproportionately affects Latinas. Having recently given birth to a healthy HIV-negative baby girl, Luz also knows that motherhood is a real option for HIV-positive women.

Born in Puerto Rico in 1969 and a resident of The Bronx, New York, since 1999, Luz de Jesus Roman lives in two worlds: her Spanish-speaking world and her English-speaking world, which often collide. As a mother, a wife, a daughter and a person living with HIV, Luz struggles to bridge her different realities and to fight HIV while raising her family.

Luz was diagnosed with HIV in 2004. She became a widow in 2005 when her first husband, who was HIV positive, passed away only months after her diagnosis. He was the father of her first four children, who are all HIV negative. Luz remarried in 2006 and decided to have a baby. On October 21, 2008, Luz gave birth to Janel, a healthy baby girl who has since tested negative for HIV.

Janel is a beautiful reminder that motherhood is indeed a real option for HIV-positive women. Under the supervision of a physician, an HIV-positive woman taking the proper HIV medications and other precautions (such as cesarean sections for women with high viral loads) can reduce the rate of transmission of the virus to her baby to 2 percent or less, according to the CDC.

We chatted with Luz shortly after she got the happy news that Janel was HIV-free.

How did you find out you were HIV positive?
It was a routine test. The [HIV counselor] put the results in front of me. When I looked at it, it said positive. I got up and hugged her, and I said I’m scared for my kids. I was in a state of disbelief. [My first husband] was diagnosed [with HIV] in 2000. I started testing every three months, and it was always negative. There were a lot of ups and downs [in our marriage]. There wasn’t a lot of communication. I thought because it’s once in a while [that we don’t use protection], I’m not going to get it. I was wrong.

How did you initially deal with your HIV diagnosis?
I cried like a baby the first night. I was in the bathroom, and I remember just letting it all out. [Two days after I found out that I was HIV positive] I participated in the morning meetings [of a support group for people with HIV/AIDS in New York City]. It was uplifting. I became a real woman in that place.

I was terrified about people finding out, especially my family, because of the stigma. [For example,] there was this guy who used to work with my dad [in Puerto Rico], and he was HIV positive. I was about 18 years old at the time, and I didn’t know anything about HIV/AIDS. My dad cooked [for him], and the guy was eating [off of my dad’s utensils]. I thought my father was crazy, because I’m thinking you can get HIV from using the same spoon. Now, I know that’s not true.

How did you cope with becoming a widow only months after your HIV diagnosis?
[My first husband] had hepatitis C before he was HIV positive. He wasn’t taking care of himself [the last months of his life]. I found out I was HIV positive in August 2004, and I became a widow in February 2005. It was like a roller coaster.

I just tried to keep it together because my whole family was hysterical. But God gives you what you can handle, not more. [My first husband and I] had a relationship that wasn’t great, but we had four beautiful children. I’m HIV positive, but today I’m happily married and have a beautiful baby girl.

Please tell us more about your new baby, Janel.
[My second husband and I] were waiting for the train one day, and I said, “Let’s have a baby!” I started doing research on HIV medicines [to prevent transmission of the virus to my baby]. I had had four cesarean sections, so the doctor said it’s the best thing for me to have one again. I had an IUD, and had to get it removed. During the time that I was trying to conceive, we didn’t use protection, but after we had the baby we used protection again. It was nerve-racking during the months they test the baby [repeatedly] for HIV. In 2009 I got the final phone call saying she’s negative. If my baby would have been HIV positive, I would have been crushed.

As a Latina, why is it important for you to be open about your HIV status?
Because I think we still don’t have a face out there representing Latino people. Magic Johnson represents black people, but he was famous before he became positive. We need real people. I’m low-income. I’m a homemaker. I live a normal everyday life. We need people like me.

Why should people get tested for HIV?
If people get tested and they they have HIV, they can start using protection. Do the right thing, be smart, get educated. Don’t be afraid. People make it bigger than what it is—it’s just a virus. [Knowing your status means] you can prevent other people from getting infected. Not only that, [by knowing your status and not passing it on to others] you are protecting your family. If we continue to pass this on, it’s going to stay with us forever. It’s going to be out there, and who’s to say tomorrow your daughter or son is not going to get it from somebody else because the vicious cycle continues.
Why should people disclose their HIV status?
In the long run, [not disclosing will] affect them emotionally and physically; it does take a toll. It’s draining; you don’t need to carry that. You don’t need to be ashamed; there’s nothing wrong with [having HIV]. Why should I be ashamed? It’s who I am, this is me. You accept me for who I am, and if you don’t it’s your loss.
Why did you disclose your HIV status to your family?
For the past five years, I told a few very select group of people, and I felt confined. I felt that I couldn’t do as much and as many things as I know now that I can do. It was about time. I think it wasn’t fair that for so long I kept it to myself. I always say you don’t know how long you have, so I want to make every moment count.

How did you disclose your HIV status to your family?
It was a very slow process [to tell most of my family]. I made a lot of mistakes in the beginning with my children. [I talked to the older ones at first too bluntly,] which was ignorant on my part because you don’t say it like that to children. I learned, and then I went to them in a different way.

They were already more understanding because they knew about their father [being HIV positive]. They took it well, the second time around. I told my youngest son recently. We went into the details about the virus and how to handle it if people are being mean. I coached him not to be afraid.

I told my aunt and my brother right away. When I disclosed to my mother, I was actually scared because I thought that she wasn’t going to take it well. I said, “How would you feel if I told you I was HIV positive?” She said, “I would not feel good because you are my daughter and I cannot get you cured.” I said, “I’m positive.” She just kept saying, “But you had the baby.” I explained to her that I took medicine and the baby is negative. Then she said, “Que bueno.” [“How good.”] You know those moments when you want to sing? It was a healing moment for me.

Do you have any advice for HIV-positive women who want to be mothers?
No matter what people say, believe in who you are inside and follow your heart. We all have what it takes. If you’re thinking about getting pregnant and you’re not on HIV medication, get on medication. If you’re on HIV medication, do some research because there are some medications that aren’t good for the baby. The most important thing is that you take care of yourself so that the baby is healthy. I think it’s our responsibility to protect our children.

It happened for me, and it can happen for you. My baby is the best thing that ever happened to me. If she would have been positive, I guess I would have had to deal with it. But I’m glad I took the necessary steps for her to be safe.