Guillermo Chacon, president of the Latino Commission on AIDS, and advocates mark NLAAD in New York City. Courtesy of NLAAD

“We’ll defeat AIDS con ganas” is the theme for events on Saturday, Oct 15.

Saturday, October 15, marks National Latinx AIDS Awareness Day 2016 (NLAAD). Coordinated by the Latino Commission on AIDS, the campaign promotes HIV testing and prevention and provides information about the epidemic as it pertains to the Latino community. This year’s theme is “We’ll defeat AIDS con ganas,” which can be translated as “We’ll defeat AIDS with gusto.”

This is the first year that Latinx is in the official NLAAD title, replacing Latino. Latinx (pronounced “La-teen-ex”) is a gender-neutral alternative to Latino and Latina.

NLAAD got an early start on Friday, October 14, with a New York City campaign titled “Take the Train/Take the Test” that offers rapid HIV testing at various subway stops (visit nychealth.tumblr.com or call 311 for a list of locations). Similar events take place across the nation.

“More than 220,000 Hispanics/Latinos have been impacted by HIV in the United States and many more don’t know their status,” said Bethsy Morales-Reid, director of community health engagement at the Hispanic Federation, in a Latino Commission on AIDS press release. “It is important for Latinos and Latinas to get and stay in HIV treatment to be healthy and for those who don’t know their HIV status to get tested today.”

To read more about NLAAD and culturally appropriate HIV facts, read AIDS United’s POZ Blog “How Do Latinos With HIV Often Refer to Themselves?” 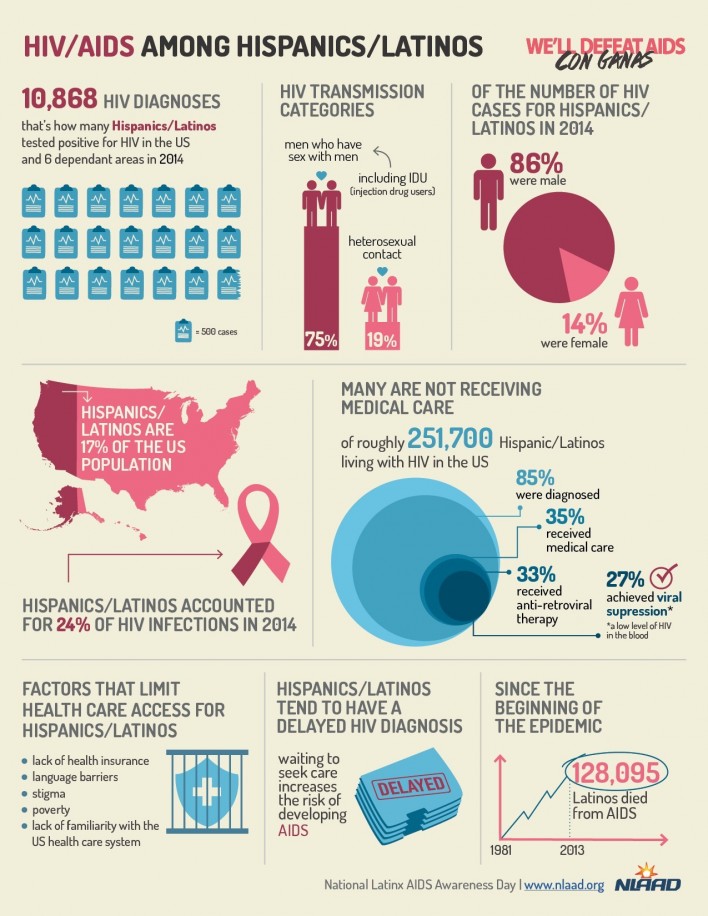 Graphics for National Latinx AIDS Awardness Day 2016 can be downloaded at NLAAD.org.nlaad.org