An analysis of the “on-demand” PrEP study found no new HIV infections among those reporting good adherence and relatively infrequent sex.

A new analysis of a placebo-based trial of the dosing protocol (also known as on-demand PrEP) helps address concerns about the protocol’s effectiveness among individuals who have sex relatively infrequently and therefore do not maintain at least a moderate level of Truvada in the bloodstream. Statistical analyses of Truvada have suggested that as few as four to six doses per week still confers maximum, or near-maximum, protection against the virus.

In 2012, the IPERGAY study began recruiting high-risk French and Canadian MSM and randomly assigned them to receive Truvada or a placebo. After the placebo phase ended, the men were invited to participate in a subsequent open-label phase, during which everyone knew they were receiving Truvada.

The new analysis concerned 361 participants in the placebo phase of the study.

The men made study visits once monthly for the first two months of the study and then switched to every other moth. They returned their pill bottles at each visit so the investigators could count the number left over.

The actual cause of this risk reduction remained unclear, on account of the fact that the IPERGAY participants took a relatively high number of pills per month—a median of 15 tablets, or about four per week. (They engaged in a median 10 sex acts monthly.) No one in any of the previous clinical trials of daily PrEP who was apparently taking four or more tablets per week contracted HIV. So in IPERGAY, were the particulars of the dosing schedule itself responsible for the considerable HIV risk reduction, or was it just the overall frequency of pill taking?

In order to answer this question, the investigators conducted a new analysis, looking at periods between two consecutive study visits when participants in the placebo phase of the study reported using 15 or fewer tablets of Truvada per month and also reported using intercourse-based PrEP “systematically or often” for acts of sexual intercourse, as opposed to “from time to time or never.” The investigators pooled together the participants’ follow-up time that hewed to this pattern of reported pill use.

Six participants who reported such pill-taking patterns contracted HIV during such periods. All six infections were in the placebo arm, which included 64.8 cumulative years of follow-up, amounting to an infection rate of 9.3 percent per year. The zero infections among those in the Truvada arm occurred during 68.9 cumulative years of follow-up. This meant that the dosing protocol was associated with a 100 percent risk reduction. However, because of the relatively small amount of follow-up time in this analysis, the researchers could state with certainty only that the actual risk reduction was between 39 and 100 percent.

“Can I say ‘Bravo’—that’s brilliant,” said Sheena McCormack, MSc, FRCP, a professor of clinical epidemiology at University College London after Antoni presented her data at the IAS meeting. McCormack is the chief investigator of the pivotal PROUD study of daily PrEP among high-risk MSM in the United Kingdom. 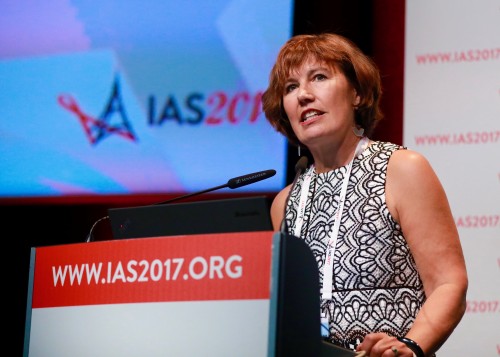