Another gay man says he was denied PrEP while serving for the Peace Corps in Ukraine, where HIV rates are high.

Is HIV history repeating itself? According to Romany Tin, the answer is yes—at least with regard to the progress supposedly made with HIV-positive volunteers at the Peace Corps.

In an article in the new LGBT magazine Them, Tin says that while volunteering for the Peace Corps in Cambodia earlier this year, he tested HIV positive (he had tested negative before leaving for Cambodia).

As if the shock of that news weren’t enough to process, within three days, Tin says, he was sent to Washington, DC, for what the Peace Corps calls “medical separation.” Tin stayed at a hotel alone until he was joined by another volunteer who had tested positive for HIV while in another country. He remained at the hotel for over a month. The Peace Corps also put him on treatment.

While in DC, Tin says, he learned about HIV treatments and was surprised to discover that they’re very effective and have few side effects—which made him wonder why he couldn’t have remained in Cambodia.

“There was no reason for them to send me home, and I want to go back and finish my service,” he told Them. “I’m willing to fight them all the way on this.” In fact, in order to better advocate for himself, Tin is now open about his HIV status and about being gay. 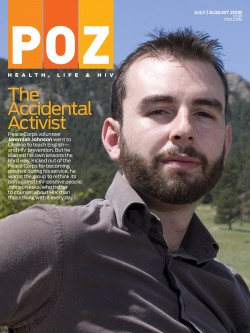 In 2008, volunteer Jeremiah Johnson was sent home after testing HIV positive in Ukraine. With the help of the ACLU, Johnson fought back, and the Peace Corps agreed to stop automatically terminating the employment of those who contract HIV. (A story about that incident landed Johnson on the cover of POZ. Today, he’s an HIV and hepatitis C activist working for Treatment Action Group. He was highlighted last summer in a POZ article titled “HIV Resists!” about contemporary activism.)

A Peace Corps spokesperson did not confirm or deny Tin’s story, but in an email to Them wrote: “[T]he Peace Corps does not terminate volunteers solely for having HIV.”

The magazine article also profiles James Fishon, a gay man who served for the Peace Corps in Ukraine last year and who says he was denied the HIV prevention pill Truvada as PrEP when he requested the pre-exposure prophylaxis.