After winning four Laurence Olivier Awards (the British equivalent of the Tony Award), the much-anticipated hit West End play by Matthew Lopez opened on Broadway in November 2019. The play is performed over seven hours in two parts (that’s a lot of play!) and is based on the novel Howard’s End by E.M. Forster. The production is set in modern New York City, and centers around a group of gay men a generation after the HIV/AIDS crisis of the ’80s and ’90s. The London production was cheered as the winner of more Best New Play awards than any other play in West End history, but New York critics were mixed. Audiences, however, flocked to the show, calling it at times wickedly funny and supremely moving. It sadly closed in March 2020 when the COVID-19 pandemic forced all of Broadway to go dark.

WINNER: One in Two

Also opening in New York last November, One in Two was a show performed Off Broadway at the intimate Signature Center on Theatre Row on 42nd Street. Writer Donja R. Love took inspiration from the 10th anniversary of his own HIV diagnosis to create a play that explores the experience of being queer and Black in modern society. He took the title from a 2016 statistic from the CDC that said that one out of every two Black gay or bisexual men would be diagnosed with HIV in his lifetime. Using both humor and honesty, Love created a work that resonated a lot with audiences. The show was performed in a limited run of seven weeks. However, in June 2020, it had a mini-revival. As part of Playbill’s Pride Plays (virtual productions), the actors from the Off Broadway production recreated their fantastic performances online to benefit Broadway Cares/Equity Fights AIDS. 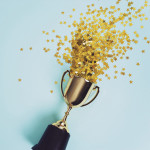