The former POZ editor-in-chief takes her fight against HIV to the world stage as a policy officer for UNAIDS.

Twitter
Facebook
Pinterest
Tumblr
Email
Advertisement
Regan Hofmann is a policy officer for the Joint United Nations Programme on HIV/AIDS (UNAIDS). She started working full time at UNAIDS this past January in its Washington, DC, liaison office. She focuses on building stronger and more strategic collaborations with partners working to support global action to end AIDS. They range from people in the executive branch of the U.S. government, to members of Congress, to advocacy groups, nongovernmental organizations and faith-based organizations.

Previously, Hofmann was editor-in-chief of POZ. While at the helm of this magazine, she covered significant moments in HIV/AIDS, such as curing Timothy Ray Brown (a.k.a. the “Berlin patient”) of leukemia and HIV, as well as the end of the U.S. HIV travel ban, which led to the return of the International AIDS Conference to Washington, DC, in 2012. During her POZ tenure, she also covered the creation and rollout of the National HIV/AIDS Strategy. Those experiences and her insights as a person living with HIV have prepared her well for her current UNAIDS role.

Hofmann shares her thoughts on ending AIDS and what that means, the prospects for U.N. Sustainable Development Goals that include HIV/AIDS, and her continuing role as a board member of amfAR, The Foundation for AIDS Research.

What does UNAIDS actually do?
It was started with the mandate of advocating for accelerated, comprehensive and coordinated global action to help address the HIV/AIDS epidemic. We have people in every country where the epidemic is occurring.

Since we’re international civil servants, we also can be helpful in facilitating conversations and connections, whether on the hyper-local, national or international level.

At our DC office, we provide key players with the information that they need to engage and be part of the solution, and then we inspire them to remain involved, or to become involved if they’re not involved.

Tell us about ending AIDS—and how UNAIDS defines what that means.
In 2011, U.N. member states adopted the United Nations Political Declaration on HIV/AIDS. Our goal was to achieve specific targets by 2015: developing and employing more effective prevention efforts; finishing the job of preventing mother-to-child transmission; ensuring that eventually everyone knows their HIV status and is connected to care, staying on treatment, and virally suppressed; making sure the response is sustainable, so the epidemic isn’t an unending crisis; encouraging respect for human rights; and encouraging scientific solutions.

All these things support our main goal, which is trying to end the AIDS epidemic by 2030. However, we’re careful about that language. We realize that there will continue to be people living with HIV. Eventually we’d love to have functional cures and vaccines, but we’re currently working to get ourselves out of an epidemic state.

The other thing that’s important to remember, as we talk about ending the AIDS epidemic, is that we have a fragile window of opportunity. If we miss this window, it’s going to take a lot more time and money, and a lot more people are going to die before this epidemic is under control.

To underscore that point, just before the 20th International AIDS Conference, which was held in Melbourne, Australia, this past July, we released our “Gap report” to help people get a good sense of where we are in the epidemic. For example, the epidemic is not just “in Uganda.” It’s in specific parts in specific groups.

There are sub-national epidemics, and there are specific geographies and certain populations or groups who are more heavily affected. Understanding who has it and where they live and what their needs are allows us to channel whatever resources we have most efficiently and have the biggest impact.

What is UNAIDS currently focused on?
A major initiative is ensuring that the goal of ending the AIDS epidemic is in the U.N. Sustainable Development Goals (SDGs). The SDGs agreed to in 2016 will replace the Millennium Development Goals (MDGs) that were implemented in 2000.

The MDGs had HIV/AIDS goals. It’s not clear if the SDGs will have such specific goals on the virus. That said, we’re in the middle of a process that is evolving. Right now, of the 17 goals put forth, there is a health goal with language around ending the AIDS epidemic.

No one knows at this point how extensive the list of SDGs will be or how it will be configured. The world has never been through this process, which is different from the MDG process. At the moment, there is support for addressing AIDS in the SDG process.

A related initiative is called ACT!2015, which targets young people. We’re trying to get them involved in the post-2015 SDG process. They could potentially be one of the first generations without AIDS. That’s why it’s so important for them to be engaged with the creation of SDGs inclusive of HIV/AIDS.

We’re also focused on the elimination of new HIV cases among children. We’re seeing a heightened awareness of the need to protect those children who are thankfully born HIV negative but who are growing up in areas where there is a high prevalence of HIV. We saved them from perinatal infection, and we want to make sure they grow up free of HIV.

We’ve also come up with new targets for the world to think about. Researchers worked on what it would take to get to a place where we can say, “We have ended the AIDS epidemic.”

The 90/90/90 targets are not arbitrary. They are the result of months of high-level professional modeling. That’s the formula that can get us by 2030 to that breaking point where we can say that we’re ending the AIDS epidemic. 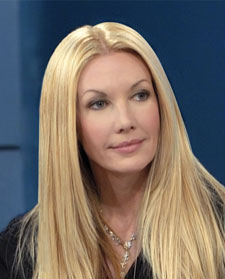 Are you still on the amfAR board?
Yes, I’m the chair of the communications and social media committee. I’ve also focused a lot on generationCURE, an initiative that tries to get younger people interested in the science, the need for more research and how HIV research can help with other diseases.

We have a capital campaign going on at amfAR called Countdown to the Cure, which is truly exciting. Its target is $100 million, which we’ve identified as the sum that would really jump forward the scientific response.

We’re looking to engage a lot of new people, particularly young people, in the response. This is a difficult issue to message, whether you’re talking about ending the AIDS epidemic, or even responding to it scientifically.

If we can heavy up the resources now, we can likely see exponential leaps forward in shorter amounts of time. In the next five years, we have to step up. In that time, we have to contain the number of people with HIV and control the rate of new cases so that the epidemic doesn’t continue to grow.

40 Years In and 10.2 Million People With HIV Still Aren’t on Treatment