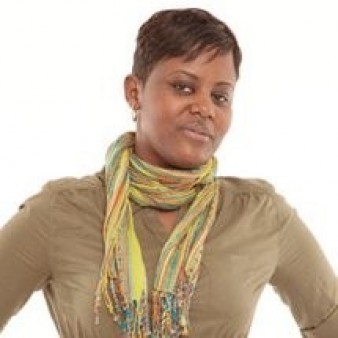 When she left her country for America at the age of 20, Consolee Nishimwe was one of the “walking dead”—a mentally, physically and spiritually savaged survivor of arguably the world’s most brutal genocide. She was also living with a different kind of war wound, one that was confirmed when doctors diagnosed her as HIV positive. Today, she is living proof of the resilience of the human spirit and a fine example for HIV-positive people everywhere.

Like gasoline thrown on a bonfire, the murder of Juvénal Habyarimana, Rwanda’s Hutu president, in April 1994 exploded the hatred between Hutu and Tutsi, the country’s two primary groups.

In the town of Rubengera, then 13-year-old Consolee Nishimwe and her Tutsi family scrambled into hiding. Similar scenarios played out across the country.

At first, sympathetic Hutus hid Nishimwe, her parents and four siblings. But their petrified benefactors told them to leave after a few days because they feared reprisals.

“Eventually, we hid in the bushes during the day and tried to find refuge during the night in the forest,” Nishimwe says. “But around 5:00 one morning the killers found us.”

The killers Nishimwe describes were not soldiers or militiamen. “They were just normal people,” she says. “They were our neighbors next door, people you knew and saw every day.”

Tensions between the Hutus and Tutsis had been high since the 1930s, when Belgian colonizers forced the Rwandans to carry identity cards to differentiate them. Before that, the groups were distinguished based on economic status. Rwanda’s fluid  social system allowed people to move from one group to the other. Back then, they weren’t warring tribes.

But as Nishimwe’s family hid, radio broadcasts continued to direct Hutus to find and kill Tutsis, even young children. “They were already prepared with machetes in their homes,” Nishimwe recalls. “Each Hutu had clubs, these huge pieces of wood with nails in them. They were not soldiers.”

Initially, the killers also robbed the family of money and everything else that they had. “They let us go, but when we reached another place, we met other killers,” Nishimwe says. “Me, my mother and my other siblings ran into another house, but our father didn’t follow us there. He tried to go someplace else so we wouldn’t be killed together.”

Because he was male, the killers chose to track Nishimwe’s father. Later that evening, as the family hid in a neighbor’s ceiling, they heard men outside saying they had killed her father. Her spirit crushed, Nishimwe felt hopeless.

“I felt like walking out so they could kill me, but my mom stopped me,” she says. “It was really hard because my dad was my best friend.”

Now a widow, Nishimwe’s mother urged her children to pray. The family continued searching for hiding places. They took refuge with another Hutu family, but soon had to leave when the “man of the house” joined the killing spree and ordered them out of his home.

Eventually, killers found Nishimwe’s family. “That’s when they took my mother and younger brother, Bonfils, from us,” she says.

Nishimwe and three siblings—Philbert, 9, Pascal, 7, and younger sister, Jeannette—hid in the bushes. “We heard them say that they couldn’t find the little inyenzi [Rwandan name for cockroaches]. That’s what they used to call us.”

Later, the siblings surrendered in order to be reunited with their mother. “We said we wanted to see her and would die with her,” she says.

In the early evening, a group of five to 10 men armed with nail-studded clubs and machetes came for Nishimwe’s brothers. “[My brothers] were no longer living even though they were alive,” Nishimwe says. “[When they were attacked, they didn’t fight because] it was as if they felt they were going to be with our dad.” Only Bonfils protested. He wanted to stay with his mother and clung to her.

“They took the three of them to a burned house and slaughtered them,” Nishimwe says.

That’s when Nishimwe’s mother shut down mentally. “You could see that she was dead inside,” she says. “She kept repeating that she didn’t want to live anymore.”

As they waited for death, Nishimwe, her mother and sister huddled together in prayer. One of the gunmen returned, but instead of killing them he let them go.

Some other Hutus in the town helped Nishimwe and her family find new hiding places. One of them took her sister. “He said he had kids the same age as her and would hide her with his kids,” Nishimwe says.

Ultimately, she was not that fortunate.

After Nishimwe and her mother returned to a previous hideaway, they were spotted by a man who used to be a neighbor.

“Now he was crazy drunk and a killer. He pulled me from our hiding place at sword point,” Nishimwe says. “I fought and screamed at him to leave me alone, but he dragged me away.”

The neighbor, a Hutu man known to be HIV positive, took Nishimwe to a place near her home and raped her. He left her laying on the ground bruised and bloodied from sword cuts. “He probably thought I was going to die because I was bloody and unconscious,” Nishimwe says.

But Nishimwe did not die. Dazed, she walked back to where her frantic mother was keeping a vigil. “I was not trying to hide anymore,” she says. “I didn’t care about being killed.”

The world watched transfixed, and although the U.N. Security Council condemned the killing, it did not label the situation a genocide, which prohibited it from intervening. During two weeks of savage bloodletting, Hutu killers butchered about 250,000 Tutsis and moderate Hutus.

Then, almost 100 days after it began, the genocide ended. Several years later, a 2002 Rwandan government census  announced that the body count totaled more than 1 million people. Tutsis accounted for 94 percent of those killed.

Four years later, Nishimwe found herself in a refugee camp with other survivors. She knew something was wrong.

“When the genocide ended, I was very weak all the time,” Nishimwe says. “While everybody else tried to do things to recuperate, I wasn’t able to eat or do anything.”

Then one day Nishimwe noticed something unusual on her legs. She was sure the lesions there were connected with her rape. Indeed, many Tutsi women who were gang-raped during the Rwandan genocide subsequently tested HIV positive.

Like millions of other African women and girls who survived gender-based sexual abuse and violence, Nishimwe was now also living with HIV.

Just how many Rwandan women became HIV positive because of the conflict remains unknown. In 2004, the Rwandan Association of Genocide Widows, based in the country’s capital, Kigali, estimated that two thirds of their female membership of 25,000 contracted the virus during the conflict.

Nishimwe also dreaded the stigma associated with HIV. She vigilantly hid her status. “I did everything I could to cover the marks on my skin,” she says.

Then Nishimwe began having flashbacks. “These episodes actually destroyed a lot of things in my life,” she says, “but thank God things changed.”

What changed for Nishimwe was that her cousin Immaculée Ilibagiza, also a genocide survivor, arranged for her to come to New York City.

She took Nishimwe to a private doctor to get tested for HIV. When the results came back positive, the doctor sent her to a hospital for treatment.

“When I went to that hospital, I met a compassionate case worker who helped me find a nice doctor and nurse practitioner,” she says. “I talked to them and told them about myself, and they helped me. That’s how I started learning how to take care of myself.”

At the time, Nishimwe worked as a preschool teacher, but she says it was difficult because she was always distracted, plagued by the horrors she’d experienced in Rwanda. As an outlet, while on her breaks, she began writing about her feelings and the pain in her heart.

“Then I found places where I could learn more about HIV and taking care of myself,” Nishimwe says.

One of those places was Gay Men’s Health Crisis (GMHC), an AIDS service organization. Eventually, Nishimwe reached a point where she began talking about being HIV positive with others. “Before I wasn’t able to express what happened to me; the words wouldn’t come,” she says. “Now I’ve started sharing my story with people.”

Today, Nishimwe is grateful for the psychotherapy that helped her move past the trauma and get on with her life. “Now I find that I am able to be more open about my feelings and other things,” Nishimwe says. “My conversations with people are more engaging now than they have been for the past 15 years, and I am more motivated to accomplish goals I knew I wanted to achieve, but just could not summon the interest.”

Therapy also helped end Nishimwe’s nightmares triggered when she watched TV programs involving violence. The constant conversations Nishimwe had with caring, professional therapists and other people who suffered similar traumas in their lives “slowly but surely helped me to overcome some of the painful memories,” she says.

“I felt freed from the bondage in which I lived for so long,” Nishimwe continues. “All the tension I had in my body and mind gradually disappeared, as well as the nightmares and negative thoughts.”

Eventually, Nishimwe stopped teaching preschool and became a student. She recently applied to a state college where she plans to study medicine and, perhaps, become a nurse practitioner.

“I’m thinking about what I can do in Rwanda, especially for the women who experienced what happened to me,” Nishimwe says. “There are many in small towns that don’t get enough care.”

Nishimwe’s mother and sister remain in Rwanda. She plans to visit them in the future. “I still have to make a decision about whether I will go back there to live,” she says.

In the meantime, Nishimwe continues to heal. She has survived genocide and HIV. Her bravery in telling her story will undoubtedly inspire other trauma survivors to speak up and get help so their healing process can begin too.