The longtime AIDS activist died of complications resulting from a severe fall on May 14 at the age of 80.

Andy Vélez (1939–2019) spent more than three decades on the front lines of activism. From the moment he joined ACT UP in 1987, the HIV-negative ally made his voice heard loud and queer and emboldened several generations of activists to follow suit. Andy didn’t only fight against HIV/AIDS, he also fought on behalf of LGBTQ rights and for health care access for all. Even as he joined the younger activists he had inspired and mentored at their own demonstrations, Andy remained an active member of ACT UP and, until his death, moderated the community resource POZ Forums.

But best of all, Andy managed to channel his anger into action without even a hint of self-seriousness. As author and professor Dale Peck wrote in a tribute we couldn’t fit here (read it in full on Facebook): “Andy made activism seem like the most joyful, empowering and fulfilling way to be in the world: in service to one’s community, one’s ideals and a more hopeful, inclusive vision of society.”

May Andy rest in peace; may we continue to resist in his honor. 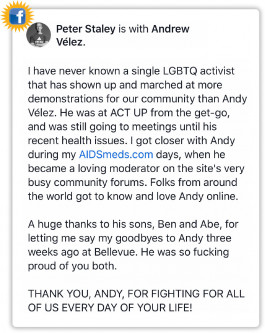 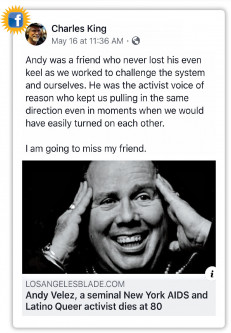