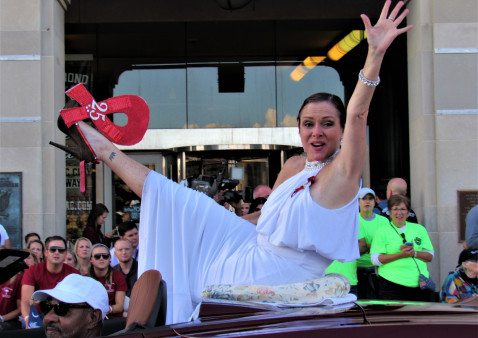 Leanza Cornett, Miss America 1993, at the 2017 Show Us Your Shoes parade on the boardwalk in Atlantic City, New Jersey. CC BY-SA 4.0/Farragutful

Unafraid of controversy, she spoke publicly about HIV and safe sex. Here’s an excerpt from her 1997 POZ Q&A.

Leanza Cornett, who was crowned Miss America 1993 and used her platform to raise awareness about AIDS at a time when the subject was controversial, died October 28, 2020, after suffering a head injury during a fall at her home in Jacksonville, Florida, reports The Washington Post. She was 49.

#LeanzaCornett, who was crowned #MissAmerica in 1993, has died at age 49. Read more at the link in our bio.

Before the Miss America pageant, she had starred in The Little Mermaid at the Disney-MGM Studios Park in Orlando. It was through the theater that she met friends who had HIV and died of AIDS-related illness. It made her want to speak out and promote safer sex, even at public schools that didn’t want her to use the words AIDS or condoms. But she persisted.

“Girls, no love unless he wears a glove,” Cornett told the teenage students, according to the Post. “Boys, if you love her, wear a cover. Don’t leave home without it.”

We lost one of the greats. Leanza Cornett, our Miss America 1993, was the first to proudly make her platform HIV/AIDS awareness and prevention. Beautiful, talented, strong... she was an entertainer. It was my honor to work with her as an original panelist on @thechatladies and capture her shine. ???? Your Chat family knows you’re still shining (and singing) up above, Forever Miss America. ???????????????? #TheChat #LeanzaCornett #MissAmerica

After her reign, she remained outspoken about HIV causes. In 2017, for example, when she participated in the Show Us Your Shoes parade on the boardwalk in Atlantic City, she proudly wore red heels with giant red ribbons attached (see photo above).

In recent decades, she worked as an actress, appearing in episodes of Weeds and CSI: Crime Scene Investigation. According to Deadline, she also hosted television shows, including Entertainment Tonight and Who Wants to Marry a Multi-Millionaire?

It is with a heavy heart that I share with you the passing of my ex-wife , Leanza the mother to our two extraordinary sons Kai and Avery. We will always remember the wonderful times shared during her short time here on earth. I find comfort knowing Kai and Avery will forever have the best guardian angel watching over them as they navigate life’s path. I ask that you please keep them as well as Leanza’s parents and her family in your prayers.

Cornett was married for 17 years to broadcast journalist Mark Steines and is survived by her parents and two sons.

For a better sense of Cornett’s energy and humanity, read the story by HIV activist and blogger Mark S. King titled “The Night Miss America Met the Biggest Star in the World” as well as King’s 2015 interview with her titled “Catching Up With the First Miss America to Champion AIDS Awareness.”

Below is an excerpt from a May 1997 interview with POZ magazine, in an article titled “A Delicate Bully Pulpit”:

Were the pageant organizers uncomfortable [you chose AIDS as your community-service platform]?

Florida is a very conservative state, even though they have this incredibly high AIDS caseload. The president of the organization warned me: “You know the press is going to go after you. It’s enough to be competing for Miss America. Do you really want to add this on?” And I replied, “It’s the only thing I know. So I would be a liar if I didn’t say this was my platform.” If I fell flat on my face because of their attitudes, that would be their fault, their issue.

But in the end, I got invited to speak about AIDS and raise awareness in places where other activists had not been able to go. A conservative Southern Baptist church is not going to say: “Hey ACT UP, come on and talk to us.” It was very important to me that I was able to reach people who had not yet been reached.

Who was the first friend you lost?

Guy Cardwell. We just clicked—he was a talented actor, young and very good-looking—and we would hang out. Go to dinner, go to plays, and he would come to Disney where I was working, and we’d play in the park.

Then one day he asked if I could drive him to the doctor. At this point, he was starting to get sick, KS [Kaposi sarcoma] and that sort of thing. I was very nervous. I remember sitting in the doctor’s office, and they were going to burn off, or freeze, some of the lesions. This wonderful doctor was just very candid about what was going to happen. I couldn’t hold it together. Excusing myself, I found a pay phone and called my mom, and burst into tears. I mean, this was my friend, and we were so young. My mom said: “If you can’t handle it, then he doesn’t need you to be there, because he needs you to be strong. If you’re not a big enough girl, then he needs somebody else in his corner.” Which amazed me; I’d never heard my mom talk like that. So I went back. I could always just go home and bawl my eyes out, but Guy had to live with it. He died in February of 1994.

So tell me: What is beauty?

I could probably give you a really cliché answer and say, “It comes from within”—and I do think there’s merit to that—but I think, especially in the society we live in, beauty has to do with taking care of yourself and being as happy as you can be—in spite of whatever odds you’re facing.