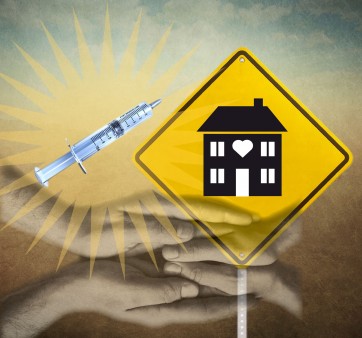 On the Safe Side

Frustrated with her inability to help drug users who kept cycling in and out of the hospital emergency room where she worked in Canada, registered nurse Liz Evans quit to run a single-room-occupancy (SRO) hotel in the Downtown Eastside neighborhood, just a few blocks away from Vancouver’s main business district.

The Downtown Eastside was and still is notorious for high rates of drug use, poverty and mental illness. “It was like a wasteland of human suffering, and nobody was paying witness to it,” says Evans, who began working at the SRO hotel back in 1991. “It was like the refugee camp of the war on drugs.”

In the 70-room hotel, all but perhaps one of the residents were shooting up, two thirds were mentally ill and half were HIV positive, Evans recalls. Heroin overdoses were common. “I would find people literally turning blue in the hallways” because the drug had suppressed their breathing, she recalls.

Evans and other Downtown Eastside community activists heard about a program in Frankfurt that had greatly reduced overdose deaths as well as the transmission of HIV and hepatitis C resulting from shared syringes. The Vancouver activists spent seven years campaigning for a similar “supervised injection facility,” also called a “safer injection facility,” or SIF, which they opened in 2003.

The Vancouver SIF, called InSite, has 13 booths where clients inject drugs that they bring with them. Not only has InSite been associated with a drop in overdose deaths in its Downtown Eastside neighborhood, but, using mathematical models, researchers also estimate that it prevents dozens of new HIV cases and a handful of new hep C cases each year.

At least 98 SIFs operate in 66 cities in 10 countries, according to SIF NYC, which is pressing for SIFs in New York City. With their clean spaces, sterile injection equipment and supervision by health care professionals, SIFs provide an alternative for people who would otherwise shoot up in restrooms at fast food restaurants or public libraries or in alleyways or parks.

To SIF proponents, drug use is not an either/or proposition—either you’re drug-free or you’re a junkie on the street, in jail or dead. Instead, supporters say, SIFs can help people stay as healthy and safe as possible even though they’re still injecting drugs, a strategy known as harm reduction. And if they want to stop using, SIFs offer easy access to treatment.

Dan Morhaim, MD, an emergency room physician in Baltimore and a member of the Maryland House of Delegates, sums up the need for SIFs bluntly: “You can’t get a dead person with substance abuse [issues] into treatment.”

Morhaim and other SIF advocates say they’re not trying to encourage drug use by making it more comfortable, as some critics have charged.

“We’ve made drug use uncomfortable for decades, and we haven’t reduced the epidemic,” says Patricia Sully, a Seattle lawyer campaigning for SIFs in her city. “We want to reduce death. We want to reduce disease transmission. I think one of the major benefits is that SIFs can connect people to other services.”

Even if clients come to the facility only to use drugs, it has accomplished its main goal of harm reduction, says Sully, a staff attorney at the Public Defender Association who works with the Washington state chapter of VOCAL, or Voices Of Community Activists & Leaders, a grassroots organization of people affected by HIV/AIDS, hep C, the war on drugs and incarceration.

For 13 years, InSite has been the only public SIF in North America (the Dr. Peter Centre, which provides care to people with HIV/AIDS in Vancouver, also operates a SIF but only for its clients). In Canada, though, under the Liberal Party administration of Prime Minister Justin Trudeau, SIFs are expected to open in Toronto, Montreal and Ottawa as well.

Public health experts and community activists say the U.S. political climate is more favorable than ever for SIFs, and they expect at least one to open soon in the United States, possibly in Seattle.

“The likelihood that you could have something like this is greater than it’s ever been,” says Leo Beletsky, an associate professor of law and health sciences at Boston’s Northeastern University.

“There’s never been a better time to rely on enforcement discretion at the federal level.” Beletsky points out, for example, that the U.S. Justice Department has not been enforcing the federal Controlled Substances Act, which outlaws state-approved and regulated marijuana dispensaries.

“There’s often a gap between what should be happening legally and what’s actually happening,” Beletsky says. He notes that King County Sheriff John Urquhart, a law enforcement officer for 40 years, has said publicly that he would not prosecute people seen entering or leaving a SIF.

The bottom line is that SIFs reduce the harms associated with injecting drugs, Beletsky says. “The amount of peer-reviewed research that’s come out, specifically from Vancouver and also Sydney and other places [with SIFs]—it’s very, very strongly evidence-based.”

Drug use isn’t a bigger problem in Seattle and King County, where the city is located, than in the rest of the state or country, but local elected officials and law enforcement appear to be more open to the SIF concept than their counterparts in many other communities, says Jeff Duchin, MD, health officer for Public Health-Seattle & King County.

They “understand that the war on drugs hasn’t gotten us to where we need to be,” Duchin says. “They understand that addiction is a disease, not a criminal activity, and must be treated as such.” He cochairs the Task Force on Heroin and Prescription Opiate Addiction, convened in March by King County Executive Constantine and the mayors of three municipalities in the county, including Seattle’s Murray.

While the target population is people who inject drugs, Seattle is likely to open a “supervised consumption room” so as not to exclude any drug users, Duchin says. “The people who are smoking cocaine are more likely to be racial and ethnic minorities,” and they have as great a need for the health care and social services that a SIF would provide as injectable drug users, he says.

Shilo Murphy, a member of Duchin’s task force, doesn’t have the patience to wait until a government-sponsored SIF clears all the bureaucratic hurdles in Seattle and King County. Murphy, who says he grew up on the streets of Seattle and in a foster home, worked for the city’s University District Needle Exchange for 20 years. When that program floundered in 2007 for lack of funding, to save it he founded the People’s Harm Reduction Alliance.

“The drug users know best, so we put them in positions of power,” says Murphy, who has previously discussed his own heroin use in the media.

Under the alliance’s bylaws, 51 percent of its board, staff and volunteers have to be active users of the needle exchange program, which, Murphy says, is the largest in the country and on pace to distribute approximately 5.5 million syringes this year. It operates nine sites in five counties in Washington and Oregon.

And now Murphy’s organization is raising funds to open a SIF. “The reason I’m pushing so hard is because our folks are dying,” he says. “I want to make sure that people are taken care of and that I don’t have to organize another funeral for one of our participants.”

The main obstacle has been Seattle’s high rents, Murphy says. “People have offered us space—we just can’t afford it.”

Somewhat surprisingly, Murphy says NIMBY—“not-in-my-backyard”—attitudes haven’t been an issue so far. In fact, the city’s Capitol Hill Community Council, which represents the historically largest LGBT neighborhood in the Pacific Northwest, has gone on record as being in favor of a SIF.

“People are injecting in public now, and it’s obvious,” notes Caleb Banta-Green, a member of the King County heroin task force and a senior research scientist at the University of Washington’s Alcohol and Drug Abuse Institute. “In the past, without [drug use] being in your face, supporting a SIF would be an abstract concept for people. Now, supporting a SIF can be, for lack of a better term, self-serving.”

Anthony Radovich, a member of VOCAL-WA who describes himself as a “queer activist mentor,” says drug users are a constant presence in his Seattle neighborhood. “On any given day, I can walk outside of my building, turn the corner and there they are,” says Radovich, who suspects he contracted HIV when using drugs in the late 1970s and early 1980s. “Do I know people who have overdosed in public places? Unfortunately, I have to say yes.”

Early on, the activists working to open a SIF in Vancouver recognized the importance of making it as accessible as possible, Evans says. “You have to find places near where people are using. You have to make people feel welcome.” Still, before InSite opened, Evans says she and other staffers worried that drug users might not come even if they built it.

But strong ties to the community helped, and people started coming in droves the first day, she says. “One of the huge advantages that we had is that we had worked in the community for 12 years before the injection facility opened.”

Thirteen years later, InSite is the busiest SIF in the world, seeing as many as 900 visits every day, says Evans, who left it two years ago and is now a fellow with business magnate and philanthropist George Soros’s Open Society Foundation. Overdoses occur at InSite nearly 200 times a month, but no one has ever died there of one, she says.

And, Evans says, InSite refers about 400 clients a year to medically monitored detox. One provider is OnSite, which, as its name suggests, operates in the InSite building (it’s located on the second floor). Onsite offers 12 single-room units with private bathrooms.

After they detox, clients can move from OnSite up to the building’s third floor for transitional recovery housing, where staff members connect them to community support, treatment programs and longer-term housing.

“It’s great that InSite exists,” says Evans, whose work these days focuses on transforming how society views and treats drug users. “But is it enough? No, of course not.”

Murphy agrees. “Honestly, I think every city in the country probably should have 50 of them,” he says, with perhaps just a hint of hyperbole. “People won’t travel to go to secure injection facilities.”

Ideally, SIFs would open in multiple cities all at once, making it more difficult for opponents and the federal government to try to stop them, says Matt Curtis, policy director at VOCAL-NY.

There are promising signs that New York might be one of those cities, Curtis says. “We’ve been doing tons of meetings with city council members and the mayor’s office and the health department. Without us even asking, when the city council did a preliminary budget for 2017, they included a proposal for an impact study. A lot of people seem pretty bought into it.”