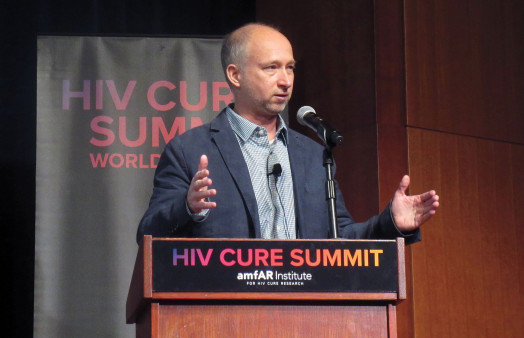 Steven Deeks, MD, was a young resident at the University of California San Francisco (UCSF) in the early 1990s when he saw his first patients with HIV. “I had these young gay men who were so motivated to learn about their health and get involved as activists,” he says. “We developed partnerships and friendships that led to me showing up at ACT UP Golden Gate meetings.” Deeks, now 59, took what was supposed to be a one-year job at UCSF’s Ward 86 HIV clinic; 30 years later, he’s still there.

After years of treating people with HIV, spanning the era when effective antiretroviral treatment made it a chronic manageable condition, Deeks set his sights on the next frontier: a cure.

The defining moment came in 2010 when someone came running into the clinic saying his next patient was Timothy Ray Brown—the first person cured of HIV. Deeks knew that a German doctor, Gero Hütter, had treated Brown’s leukemia with transplanted stem cells from a donor with a rare mutation that blocks HIV entry. Brown had stopped taking his antiretroviral therapy, but his viral load did not rebound. When Hütter presented the findings at the 2008 Conference on Retroviruses and Opportunistic Infections, the poster was tucked away in a back corner. “It was surrounded by AIDS activists but very few scientists,” Deeks recalls. By the time Brown got to San Francisco, he was a celebrity, and he was willing to work with Deeks’s team to learn more about his cure.

In March 2020, SCOPE was put on hold as researchers focused on a new pandemic. Today, there’s both an HIV cohort and a COVID-19 cohort. Deeks and his team are applying lessons learned from HIV to COVID research, including the long-term consequences of SARS-CoV-2 infection, dubbed long COVID. “Vaccines, PrEP [pre-exposure prophylaxis], antivirals—all the progress in COVID has been built on HIV investments for the past three decades,” he says. “We’re using the whole HIV playbook to figure out long COVID: Engage the community, get people into cohorts, follow them, generate hypotheses and do early clinical trials to see what’s going on.”

There are several hypotheses about what’s causing long COVID, including chronic inflammation, excessive coagulation, viral persistence, tissue damage, autoantibodies and reactivation of Epstein-Barr virus. “These have also all been implicated in why people with HIV, even on medications, still have health problems,” Deeks explains.

But drumming up interest from the pharmaceutical industry has been a challenge. “We have been knocking on the doors of every single company with antibodies or antivirals. They said, ‘Interesting idea. Come back to us when you know how to measure long COVID.’ We’re still at that stage,” he says.

Like HIV activists, long COVID advocates are pushing research forward and successfully lobbied for $1.2 billion in National Institutes of Health funding. “The HIV activist community was much smaller, mostly gay men, and they weren’t being listened to,” Deeks says. “But long COVID affects everybody. Now, people listen because of what HIV activists did.”