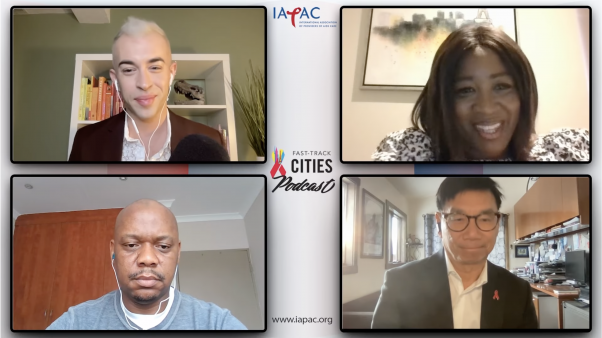 This special episode of the Fast-Track Cities podcast covers aging with HIV, measuring quality of life beyond viral suppression and more.

How’s this for a New Year’s resolution? Take back control. As in, Take control of what you’re willing to accept—or not accept—in your HIV care and treatment; take control of the stigma and fear that can dictate your worth; and take control of how you measure the quality of your life. (Hint: It’s not measured by age or viral load.)

If this sounds like an inspiring goal, then kick off your new year with a special episode of the Fast-Track Cities podcast. Titled Unmet Need in HIV: Taking Back Control, the episode features global HIV leaders, advocates and doctors discussing the importance of expectations in the context of HIV care and treatment, the challenges of lifelong adherence to treatment, aging with HIV, the power of choice and much more.

All too often, stigma and people’s negative perceptions of themselves lead them to have lower expectations of themselves and the care they receive, explains Vanessa Apea, MD, in the episode’s beginning. And yet, she emphasises, “all people deserve the best care, and they deserve to be valued.”

“Expectations [of HIV care and life with HIV] have evolved over the decades,” added Ben Young, MD, noting that we no longer view an HIV diagnosis as a death sentence like it was in the 1980s. Today, our expectations of quality care have expanded “in the spirit of health equity and human rights.”

You can listen to the episode on Apple Podcasts, Spotify, Google Podcasts, Castbox and other streaming platforms. If you prefer to watch the discussion, it’s posted on YouTube. (The video is also posted at the top of this article.)

The Fast-Track Cities Podcast Series is a product of the International Association of Providers of AIDS Care (IAPAC). The series “chronicles the story of the urban AIDS response from the early days of the HIV epidemic to the targeted efforts of Fast-Track Cities to end AIDS as a public health threat by 2030,” according to the series’ website. “This story is told through personal accounts from those involved in the urban AIDS response—city mayors, health department officials, clinical and service providers, advocates and people living with and affected by HIV/AIDS.

The Fast-Track Cities initiative is a partnership involving 450 cities around the world (more are joining all the time!) as well as global HIV organizations that aims to advance and coordinate efforts to end HIV in cities by 2030. The initiative was spearheaded by the IAPAC, the Joint United Nations Programme on HIV/AIDS (UNAIDS), the United Nations Human Settlements Programme (UN-Habitat) and the city of Paris.

For more stories about the initiative, including articles about U.S. cities that have joined the effort, click #Fast Track.