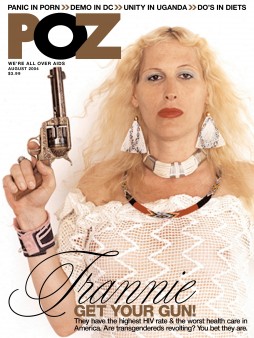 The night of Friday, February 18, I got a horrible, unexpected text from a friend: “Did u know that Chloe passed away?” (New Yorkers, click here for info on, and to donate to, her March 12 memorial service.) He was referring to Chloe Dzubilo, an HIV-positive transgender (MTF) activist and artist who, since the mid-1980s, had become a fixture in New York City’s East Village--the real-life “Rent,” so to speak.

Chloe was not just a fierce fighter for the rights of transgender and HIV/AIDS-affected people; she was a kind of beautiful, punk, lipstick-smeared, pre-Raphaelite-tressed muse for everything that was downtown, marginal and amazing in New York for the past 30 years. Some of her friends--a formidable crew of activists, writer and artists, including her widower, the transman performer T De Long; actress Rosario Dawson; and Antony Hegarty of the band Antony and the Johnsons--have written a terrific summary of her incredibly rich, varied, challenged life, which is posted at the end of this post.

So I won’t even try to reinvent the wheel and tell you how much living Chloe crammed into her 50 years. I will just say, we first met in 2002 when I was working at POZ. We’d decided to photo-shoot a diverse group of HIV-positive New Yorkers on our office rooftop one summer night with the (then newly-diminished) New York skyline in the background. Chloe came forward for the shoot, becoming the first transgender person on a POZ cover in the magazine’s then-eight-year history.

Then we sat down to do this Q&A for the issue:

Chloe Dzubilo
41, East 20s, Manhattan
9 to 5: Founder of Equi-Aid, a horseback riding program for at-risk inner-city kids
Diagnosed: 1987
First went on meds: “When I got PCP. I went on 3TC, d4T, Viramune and Bactrim. I wasn’t even on a protease and I got a big belly and scrawny legs.”
Current combo: 3TC, d4T, Viread and Kaletra. “For the first time, I’m undetectable. But I have buffalo hump and I can’t get rid of this stomach even though I’m a skinny person. Every day I have to muster compassion for my tummy.”
Who do you see in the mirror? “A face that has wisdom, that struggles, that wants to put fabulous makeup on it quickly. Especially this opalescent pink lipstick I have -- kids really love it.”
What’s beautiful to you? “Children -- they’re pure, open and know the truth. Horses. And the ocean -- it makes me incredibly relaxed.”
What does your face say to the world? “Can we please have some compassion and glitter?”

That’s how I would sum up Chloe: equal parts compassion and glitter. Who was more fabulous than Chloe? She was friends with Rosario and Tatum O’Neal and virtually anyone who had ever done anything interesting in New York from the days when Madonna was a no-name above 14th Street. She had been a champion equestrian back in her Connecticut youth as a(n apparently very cute) boy named Keith. She had dated for years the founder of the East Village’s legendary Pyramid Club. She had fronted a punk band.

But Chloe had also been through it all: HIV-positive since 1987, years of alienation from her family after gender-transitioning in the mid-nineties (she had become semi-close with them again in recent years), years living with the daily scorn and discrimination you get on and off the street when you’re a transgender person who doesn’t necessarily “pass,” an arduous hip-replacement surgery a few years ago--the result of HIV- and/or HIV-meds-related bone loss. Many years ago, she had been a heroin addict and then cleaned up her act. She took her recovery very seriously, even as she tried to balance it with an arsenal of HIV, pain and psychiatric meds (the latter taken mainly to treat her physical pain).

And yet, she shone with compassion. Chloe was rightfully angry about a lot of things, mostly social and legal discrimination against transfolk and people with HIV/AIDS. But she was not bitter. I can think of few people who’d been through so much and yet didn’t seem to lose their almost childlike passion for being out in the world, for making art, for agitating, for being part of a community--several communities, actually.

Chloe always seemed to be struggling--with her health, with pain, with her housing situation, with her benefits, with her meds. But she would always be the first person to tell me about someone’s new art gallery, show, performance project, café, play. Since 2007, she had been married to De Long (legally, that is: Chloe as a man and T as a woman), and she would always tell me what artistic project she was up to with her husband. She was the consummate artist-activist-promoter-connector-community-supporter. The last time I saw her, only about three weeks before her death, was at this show of transgender art she had co-curated. She seemed lucid, happy, engaged in the world.

That’s why I was so shocked to get that text. According to De Long and Chloe’s longtime friend Kelly MacGowan, Chloe had been doing well in recent months due to a medical management program at the LGBT-serving Callen-Lorde health center. But in the weeks before her death, she had been hospitalized briefly for what appeared to be an infection and had started having nighttime paranoia again after the dose of one of her meds was raised. She felt hostility from some of her neighbors at her longtime home, the Prince George HIV/AIDS residence, where she was one of only a few transpeople.

There, around midnight going into Friday, February 18, she was put to bed by her friend Alice O’Malley, but, security cameras and witnesses document, she left the building around 2:00 a.m., wanting to go to the police, and wandered down the block into a subway station that was apparently closed for repairs. Detectives say that the conductor of a service train reported that Chloe leapt in front of the train to her death. I hate to think of her going this way, alone and disoriented in the deserted train station, dizzy or suicidal or perhaps both from the late-night effects of her many meds. I hope she is in peace now.

Chloe, no fearer of the limelight, was on the cover of POZ two more times. Once, solo, for a cover story she proposed and appeared in on medical discrimination toward transgender HIV-positive people, then again that same year for an all-naked group photo of HIV-positive people commemorating POZ’s tenth anniversary, shot by famous artist Spencer Tunick. Without Chloe, there would have been no trans person on that cover, even though transgender MTFs have some of the highest HIV rates in the U.S. But that was Chloe. No matter what she was facing, she kept showing up.

I asked T De Long what memories of Chloe were most indelible. Chloe with horses, T said instantly. He recounted to me a visit he and Chloe took to Return to Freedom, a California sanctuary for wild horses started by a high-school friend of Chloe’s. There, said T, Chloe was the first human being ever to touch to a beautiful wild horse named Wyler. Chloe’s ashes will be scattered there. So many of us in this city will miss her. We hope and pray she’s returned to freedom. You can join us in celebrating her courage, compassion and glitter on March 12.

As mentioned above, here’s the summary of her life written by her friends:

Chloe studied art at the Parsons School of Design and received an associate degree in Gender Studies from the City University of New York City College 1999.

A native of Connecticut, Ms. Dzubilo moved to New York in 1982 where she briefly worked at Studio 54. She soon became the ad director at the downtown art magazine the East Village Eye just when the neighborhood’s art scene began to explode.

In the ’90s, Chloe was an icon of downtown nightlife. She wrote and performed with Antony Hegarty’s Blacklips Performance Cult at the Pyramid club and edited the group’s zine, Leif Sux. She was the lead singer and song writer for the punk-rock band the Transisters, who played at CBGB’s, Squeeze Box at Don Hill’s and other trend setting hubs of downtown culture. She was featured in many indie cult classic films including Wigstock: The Movie by Barry Shils, Visiting Desire by Beth B, Rock Star by Ned Ambler and Gang Girls 2000 by Katrina Del Mar.

Chloe was diagnosed with HIV in 1987 when her partner of nine years, Pyramid Club founder Bobby Bradley, died of AIDS. Since her diagnosis Chloe has advocated for civil rights, adequate health care and dignity for people living with HIV/AIDS, transgendered people and drug users. Antony Hegarty recently described Chloe as a “fierce advocate for the disenfranchised. She addressed trans-feminist grievances with anger, humor, and tenderness.”

Chloe was a tireless advocate for the diverse transgender populations in New York City. A longtime volunteer for the LGBT Community Center’s groundbreaking Gender Identity Project, she served on its transgender HIV prevention team, conducting prevention outreach in bars, nightclubs and on the streets. She spoke at national and international conferences, in video Public Service announcements and training workshops for health services providers. Chloe was involved with the political action groupthe Transsexual Menace and went on to direct one of the first federally funded HIV prevention program for transgender sex workers in 1997. She was the first transgenderedperson recognized by the Kaiser Foundation’s Daily Health Policy Report for her work.

In 2001, Chloe—who trained with George Morris (who later became Chef d’Equipe of the US Equestrian Team) and competed professionally in the A-level Hunter circuit—founded the Equi-Aid Project, a Manhattan-based riding program that specifically targets children who are infected with or affected by HIV/AIDS as well as other at-risk youth. As Chloe explained at the time, "Children with chronic health conditions often feel as

if they have no power or control. It is my belief that horseback riding, under proper guidance, offers these children a deep sense of immediate power, a power that they may have never experienced before."

In September 2002, Chloe Dzubilo became the first transgendered person on the cover ofPOZ, a magazine for the HIV/AIDS community. She graced the magazine’s cover two more times, in May 2004, as one of dozens photographed by artist Spencer Tunick and, in August 2004, for a cover story in which she discussed the difficulties that transgendered people experience in the health care system.

In 2003, Chloe was appointed to the HIV and Human Service Planning Council of New York, an advisory body composed of people living with HIV/AIDS, service providers,and government representatives, charged with ensuring that “people living with HIV have access to appropriate, quality services across the continuum of care, resulting in the best possible health and quality of life.”

In the past few years, Chloe’s visual art has been shown internationally and in several New York galleries, including Participant, Inc., and Umbrella Arts, where she recently co-curated an exhibition. At the time of her death, she was working on a project with her spouse, musician, visual artist and trans-man T De Long, which will be shown in June by the arts and advocacy organization Visual AIDS.

To offer donations in support of her celebration and her favorite causes - Visual AIDS and Return To Freedom - go to http://www.indiegogo.com/Chloe-Dzubilo.