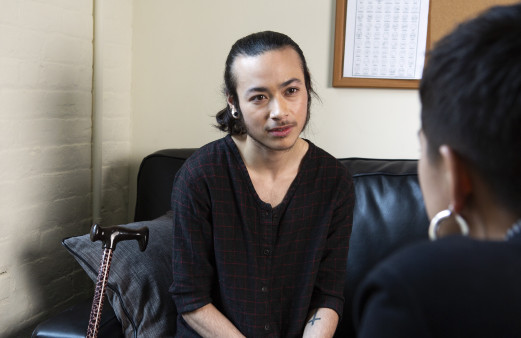 Trans Men Can Benefit From PrEP, But More Research Is Needed

The first study of PrEP awareness and use among transgender men found that a majority are at risk for HIV.

A majority of surveyed transgender men who have sex with men (MSM) engaged in behavior that could put them at risk for acquiring HIV, but so far the use of pre-exposure prophylaxis (PrEP) in this group is limited, according to a recent study from The Fenway Institute in Boston.

“Findings from this study dispel the myth that trans MSM will not benefit from access to and uptake of PrEP,” the study authors concluded. “Public health interventions and programs are needed to reach trans MSM that address and attend to general MSM risk factors as well as to vulnerabilities specific to trans MSM, including the context of stigma from cis male sexual partners.”

Studies have conclusively demonstrated that Truvada (tenofovir disoproxil fumarate/emtricitabine) and Descovy (tenofovir alafenamide/emtricitabine), the two PrEP options approved by the Food and Drug Administration, are highly effective at preventing HIV.

But this research has mostly looked at cisgender (non-trans) men who have sex with men. Cisgender women have been underrepresented, and trans men generally have been excluded altogether. In fact, because of this lack of data, Descovy for PrEP was recently approved to reduce the risk of contracting HIV via sex, with the exception of receptive vaginal or frontal sex.

In recent years, researchers have begun to conduct more dedicated research on HIV rates, risk factors and PrEP use among transgender women—finally recognizing them as distinct from the MSM category—but there is still very little research on trans men.

Between November and December 2017, the researchers recruited a national sample of trans men who have sex with men through peer networks, the Grindr dating app, social media such as Facebook groups, community-based organizations serving trans MSM and outreach at the 2017 Philadelphia Trans Wellness Conference.

A total of 857 trans men completed an anonymous self-administered online survey in English that included questions about demographics, behavioral and psychosocial factors, HIV risk, prevention needs and barriers, and PrEP awareness and use.

As described in the Journal of the International AIDS Society, most survey participants (70%) were white, 5% were Black and 22% identified as Latino. About a third were in the 18 to 24 age range, another third in the 25 to 29 range, 29% in the 30 to 39 range and 6% in the 40 to 60 age range. The group was generally well educated, with over 80% having more than a high school education. Participants were geographically well distributed, with 24% in the South, 23% in the West, 20% in the Northeast and 14% in the Midwest; two thirds lived in urban areas. Most (90%) said they had health insurance.

About 72% of respondents identified as male or as trans men and 28% as nonbinary. A third described themselves as gay. More than 80% were taking testosterone, half had undergone top surgery (breast removal/chest reconstruction) and 21% had undergone bottom surgery (genital surgery or removal of reproductive organs).

About 80% had ever been tested for HIV; the 14 individuals (1.6%) who tested positive—and therefore were ineligible for PrEP—were excluded from the analysis. More than a third (37%) had used HIV-related programs. In addition, 16% reported having a bacterial sexually transmitted infection, such as chlamydia, gonorrhea or syphilis, in the past six months.

Turning to mental health, 35% reported that they experienced a low level of psychological distress, 28% said they had a moderate level, 20% had a high level and 18% reported no distress. Further, 60% reported heavy drinking, and 20% said they used three or more illicit/recreational drugs other than marijuana. However, only 56 men (7%) reported ever using injectable drugs. Most saw themselves as facing low or moderate levels of stigma, but 14% reported a high level of stigma from cis male partners, and 19% reported high internalized stigma.

With regard to relationship status, 57% said they were in a polyamorous (nonmonogamous) relationship. Just over 40% reported sex only with cisgender men in the past six months, while the rest did so with both cis men and others. About 45% had met a sex partner online during this period. A majority perceived themselves as being at low (26%) or “moderate-low” (30%) risk for HIV, 19% thought they were at “moderate-high” risk and 25% thought they were at high risk.

Overall, 84% had heard of the use of PrEP for HIV prevention. Of these, 33% said they had ever used PrEP, including 22% who were currently doing so.

The researchers determined that 55% of the 843 HIV-negative trans men met the Centers for Disease Control and Prevention (CDC) criteria for a PrEP indication. Among participants currently taking PrEP, 65% met the CDC criteria, as did 76% of those who had stopped PrEP. In other words, about a third of people currently on PrEP did not meet the CDC criteria, but most of those who had stopped did.

After adjusting for multiple variables, factors significantly associated with being eligible for PrEP included not meeting sex partners online, not having sex exclusively with cisgender men, having a greater number of sex partners, facing stigma from cis male partners and perceiving oneself to be at higher risk for HIV. Those who identified as gay or had mental health or substance use issues were also at higher risk.