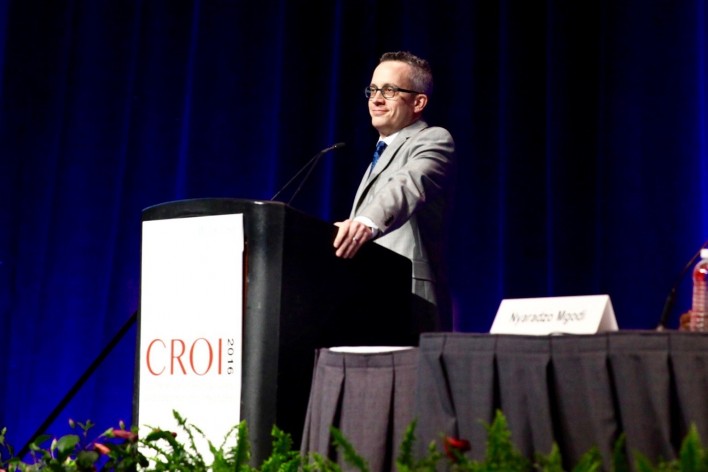 An antiretroviral-containing vaginal ring was modestly successful at preventing HIV among a large group sub-Saharan African women, but did cut risk of the virus by more than half among women older than 21. Overall, the ring, which proved safe, reduced the risk of HIV by just 27 percent. The Phase III, randomized, double-blind, placebo-controlled ASPIRE trial enrolled 2,629 women 18 to 45 years old in Malawi, South Africa, Uganda and Zimbabwe between August 2012 and June 2015.

Jared Baeten, MD, PhD, of the University of Washington, who led the study, presented results at the 2016 Conference on Retroviruses and Opportunistic Infections (CROI) in Boston. His presentation was greeted by energentic and repeated applause as well as a standing ovation by several conference attendees in the well-packed auditorium.

“This is a glass half-full moment,” Baeten said in a press release. Referring to disappointing findings in previous studies of pre-exposure prophylaxis (PrEP) among women (the vaginal ring is a form of PrEP, as is daily Truvada (tenofovir/emtricitabine)), he continued, “The HIV prevention field for women has struggled in the last few years—at times the glass had seem almost empty.”

Referring to the ongoing IPM 027 study (The Ring Study), which has shown similar results to ASPIRE, Baeten said, “Now, for the first time, we have two trials demonstrating that a female-controlled HIV prevention method can safely help reduce new HIV infections. I’m optimistic about what these results might mean for women worldwide.”

The women in ASPIRE were divided into two even groups, one of which received a vaginal ring containing the non-nucleoside reverse transcriptase inhibitor dapivirine, while the other received an otherwise identical placebo ring. The women were given a replacement ring at each monthly follow-up appointment. At each of these study visits, the participants received testing for HIV, sexually transmitted infections and pregnancy testing, and also received safety monitoring, adherence counseling, risk reduction counseling and free condoms.

“Despite having never seen or used a vaginal ring, a number of study participants told us they were very comfortable inserting and removing the ring,” Thesla Palanee-Phillips, PhD, the study protocol cochair and the director of network trials and research center programs at the Microbicide Trials Network, which led the ASPIRE trial, said in the same press release.

The researchers took participants’ plasma samples every three months to test for the presence of dapivirine. A level of more than 95 pictograms per milliliter was defined as the threshold for adherence to the ring protocol.

The study included 4,280 person-years of follow-up among participants. (Person-years are the cumulative years participants spend in a study.) The median follow-up was 1.6 years. A total of 1,024 women spent more than two years in the study.

In the group that received the dapivirine ring, 82 percent of plasma samples indicated adherence to the ring (greater than 95 pg per mL). Detection of the drug increased during the first year of the women’s participation in the study, indicating that they were adhering at better rates over time, and then stabilized thereafter.

Overall, the women receiving the dapivirine had a 27 percent reduced rate of HIV compared with the placebo group, with an estimate range of 1 percent to 46 percent effectiveness (meaning the actual risk reduction may lie within this range).

The researchers restricted their analysis to exclude data from two study sites that had lower rates of retention in the study and adherence to the vaginal ring. In this analysis, the dapivirine ring reduced the risk of HIV by 37 percent, with an estimate range of 12 percent and 56 percent. This risk reduction was statistically significant.

In a further analysis of the entire study group, the researchers found that, among women older than 21, the dapivirine ring reduced HIV risk by 56 percent (estimate range 31 percent to 71 percent), and provided no benefit to women age 21 and younger. The risk reduction in the older women was highly statistically signifcant, meaning that it was unlikely the result of chance. This difference was correlated with adherence to the ring; the older women adhered better.

Interestingly, these results were similar to those seen in the 2010 iPrEx trial, in which daily Truvada as PrEP reduced risk of HIV among men who have sex with men (MSM) by 42 percent overall and 59 percent among participants over 25 years of age.

The researchers hypothesized that the threshold they established to indicate adherence to the ring may have been too high, resulting in an overestimate of the participants’ adherence. Further analyses may help clarify this uncertainty.

Additionally, the investigators theorize that the genital tract of women between 18 and 21 years of age may be more susceptible to HIV infection and may also be more difficult to protect with pre-exposure prophylactic (PrEP) strategies such as the vaginal ring. Further research is needed with regards to these matters as well.

“Both ASPIRE and The Ring Study have raised important scientific questions about the susceptibility of very young women to HIV, as well as their willingness to use prevention products,” Sharon L. Hiller, PhD, of the University of Pittsburgh and the principal investigator of the Microbicide Trials Network, said in the press release. “Further research can address these knowledge gaps. With the number of new infections in women each year, time is not on our side. We cannot lose momentum in the search for products to reduce the spread of HIV.”

“It’s clear that the dapivirine vaginal ring can be a viable option for women to protect themselves from HIV,” Mitchell Warren, the executive director of the global HIV advocacy group AVAC, said in a separate press release. “These well conducted studies provide clear evidence that some women can reduce their risk of acquiring HIV by using the ring consistently, and they also raise critical questions about the level of use, benefit and future role in prevention that need to be answered. Researchers, donors, regulators and advocates now need to determine the best way forward to determine if and how the dapivirine ring could be used by women at risk of HIV infection.”