A new series of short videos and virtual discussions titled #PWNCares aims to connect with women living with HIV so they can feel less isolated and more empowered to discuss their biggest challenges. The initiative launches Monday, October 23, with a video titled “PWNCares: Living and Loving Well With HIV.”

Positive Women’s Network–USA (PWN-USA) created the series with a Positive Action for Women grant from ViiV Healthcare. According to a PWN-USA press release, the videos star real women living with HIV—including women of transgender experience—who offer their lived experiences and advice. After each video, the stars lead a web-based “coffee-table conversation” where they can chat with online participants.

“As peer-led services for people with HIV are disappearing, we are thrilled to launch #PWNCares, which will fill a critical gap: supporting women living with HIV during moments of isolation,” said Naina Khanna, executive director of PWN-USA, in the press release. “Feeling alone is a major barrier to engagement and retention in care. Many women, especially outside of major urban centers, may not know any other women living with HIV. Our goal is to provide them the tools, knowledge and support they need to make healthy decisions for themselves and live life to the fullest—while also offering a pathway into a national community of women living with HIV.”

Videos will be available on YouTube as well as on PWN-USA.org. Details of the first video are below: 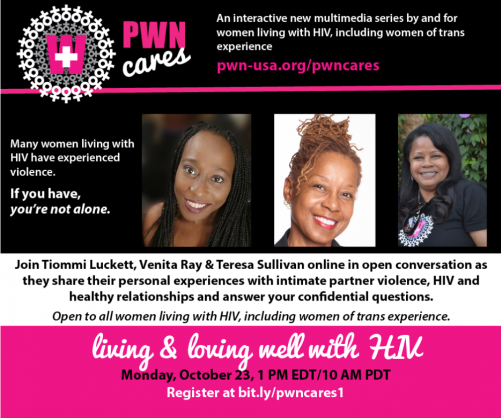 “I’m pleased to be able to share my experiences living in and getting out of an abusive relationship with other women living with HIV, in hopes that they may be able to recognize red flags early and avoid falling into the same trap,” said Venita Ray, who is featured in the first video, in the press release. “I hope that the women living with HIV who watch the video and participate in the online conversation will walk away understanding that living with HIV does not make them any less entitled to a healthy, supportive relationship and intimacy than anyone else, or than they were before their diagnosis.”

The launch of the series—Monday, October 23—also marks the fourth annual National Day of Action to End Violence Against Women Living with HIV.

You can register for #PWNCares here. According to the form, you do not have to provide your real name to participate, nor do you have to share your webcam. The debut screening takes place at 1 p.m. ET.