The Supreme Court of Canada ruled on Friday October 5th that individuals who know they are HIV-positive are liable to criminal prosecution for aggravated sexual assault - which comes with a maximum sentence of life in prison and sex offender status - if they do not disclose this fact prior to sex that may risk a “realistic possibility of transmission of HIV”. 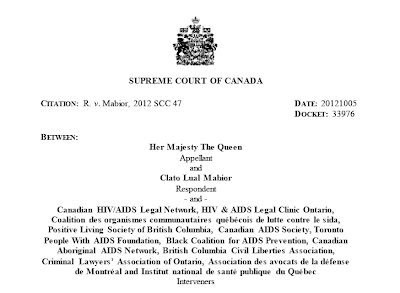 There’s been a lot of confusion about whether this ruling, which created the illusion of being fair, rational, just and based on the latest science, was a step in the right direction. Believe me, it wasn’t.

First of all, I have to correct a lot of the media reporting about this decision, which framed it in a ’glass half full’ kind of way.  Indeed, POZ’s own news story, with the headline Canadian Supreme Court Rules HIV Disclosure Not Always Required, was based on a report from CTV.com, which seemed to suggest that the previous legal situation had required blanket disclosure.

The fact is that before October 5th 2012 there was no blanket requirement to disclose prior to all and any kind of sex, as is the case, for example, with many of the HIV-specific criminal statutes in the United States.

What had been law until that date - and which the ruling reaffirmed - was based on a 1998 Supreme Court ruling (R v Cuerrier), which established that a person who knows they are living with HIV only has a duty to disclose their HIV-positive status if they are engaging in sex that poses a “significant risk” of “serious bodily harm”.  This law not only applied to the risk of HIV transmission, but to the risk of other serious sexually transmitted infections, although it was used almost exclusively for HIV.

The confusion over what had previously been law was probably created by the fact that there had been a lot of confusion over the “significant risk” test.

Chief Justice Beverley McLachlin, writing the unanimous (9-0) decision for the court, appreciated that the 1998 Cuerrier decision was not explicit enough regarding what constitutes a “significant risk” of HIV transmission and acknowledged that this has led to inconsistent and overly broad interpretations by Canada’s police and lower courts.

The confusion may also have been further exacerbated by the fact that the Canadian Government - represented by the prosecution services of the provinces of Manitoba and Quebec - argued before the Supreme Court that there should, in fact, be a blanket law requiring people with HIV to disclose prior to sex regardless of the risk.

But here’s why the decision is problematic: there is now a duty for an HIV-positive individual to disclose their HIV status to their sexual partner prior to unspecificed sexual activities, so that fully informed consent can be given, unless both a condom is used and the person with HIV also has a “low” viral load.

This is a retrograde step for both public health and human rights. The ruling undermines safer sex messaging by stating that condoms alone (or, in the brave new world where treatment’s additional benefit for prevention is being used to roll out ’test and treat’ programs, low or undetectable viral load alone) do not prevent a “realistic possibility” of HIV transmission.

In fact, it creates a different standard of ’safer sex’ for people who know their HIV status compared to those are undiagnosed (and who, in fact, drive HIV epidemics), or who are HIV-negative.

Instead, it says that disclosure alone is enough to negate criminal liability (notwithstanding difficulties of proving that this occurred) despite disclosure alone being an unreliable HIV prevention tool.

In terms of human rights, UNAIDS and the Office of the United Nations High Commissioner for Human Rights (OHCHR) have recommended since 1998 that HIV-related prosecutions should reflect general criminal justice principles: ’Clearly and legally establish[ed]’ elements of culpability, including foreseeability, intent, causality and consent."

As far as I can see, the this ruling has not clearly established any of these four elements.

One of the most common arguments for HIV-specific criminal statutes (as opposed to using general laws, as is the case in Canada) is that they clearly set out what is and what is not against the law, so that a person with HIV can foresee when they might be ’criminals’. The Supreme Court recognised that simplifying the law so that everyone with HIV had a blanket duty to disclose would allow for this kind of foreeability, but decided against this, because, “not every deception that leads to sexual intercourse should be criminalized, while still according consent meaningful scope.”

However, their solution was to create a bright line which will now be known as the “realistic possibility” test. In setting the new precedent, the court opined that “condom use is not fail-safe” and referred to a 2002 Cochrane systematic review of condom effectiveness in reducing heterosexual HIV transmission which concluded that consistent use of condoms results in an 80% reduction in HIV incidence.

In addition, despite also noting the results of the HPTN 052 study, which found that treatment of the HIV-positive individual results in an 96% reduction in HIV incidence amongst heterosexual couples of different HIV status, they went for a ’belt and suspenders’ approach.

“However, on the evidence before us, the ultimate percentage risk of transmission resulting from the combined effect of condom use and low viral load is clearly extremely low - so low that the risk is reduced to a speculative possibility rather than a realistic possibility,” wrote Chief Justice Beverley McLachlin for the court.

The court did not set an actual level for an acceptably low viral load, but offered a description, based on the evidence of the Mabior case. “When a patient undergoes antiretroviral treatment, the viral load shrinks rapidly to less than 1,500 copies per millilitre (low viral load), and can even be brought down to less than 50 copies per millilitre (undetectable viral load) over a longer period of time. This appears to be scientifically accepted at this point, on the evidence in this case.”

What about oral sex, broken condoms, other STDs, vertical transmission?

The court was silent on these important issues.

The use of science to limit the law here is an illusion.

The accused person will now have to prove that they used a condom and had a low viral load at the time of alleged otherwise consensual act.  That won’t be easy.

All that the prosecution will have to prove is that the person with HIV didn’t disclose that they knew they were HIV-positive (regardless of whether this was active deception or simply no verbal discussion of HIV risk).

Such non-disclosure continues to be treated by Canadian law as fraud that invalidates consent to sex. It conflates non-disclosure with the “intent to apply force” if it can also be shown that the sexual partner would not have consented had they known the accused was HIV positive. This is considered aggravated sexual assault, which carries a maximum sentence of life imprisonment and registration as a sex offender.

What will happen now?

Legal scholar, Isabel Grant, whose recent article exploring the issues faced by the Supreme Court was extensively referred to in the R v Mabior decision told Postmedia news that she expected to see many more criminal cases than the current tally of almost 150 since 1989 under the new interpretation of the law. “They pretty much went as far as they could have gone in the direction of criminalization,” she noted.

A 2011 study found that the lack of clarity over the duty to disclose was resulting in “anxiety [and] confusion” for people living with HIV and led to “contradictory HIV counselling advice” by healthcare workers.  This is likely to continue.

And a more recent study came to similar conclusions, and also noted that HIV transmission is likely to increase if reliance on disclosure becomes Canada’s new HIV prevention standard.