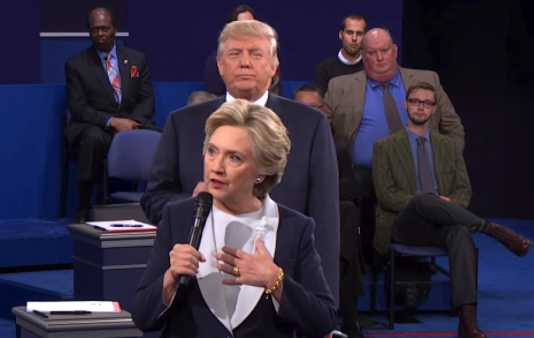 Clinton and Trump during the second presidential debate.

In summary: Bandage it or blow it up?

Even by the standards of this unorthodox election, what took place at the 2nd presidential debate between Hillary Clinton and Donald Trump was remarkably bizarre. An optimistic few might have dared to dream in the days leading up to the clash of candidates at Washington University in St Louis that substance would win out over style and bombast, but the release of audio tapes from 2005 recording Mr. Trump boasting in vulgar terms about his ability to force himself on women all but guaranteed that policy would once again take a backseat to issues concerning personality and personal conduct.

By now, the more sensational and combative moments of the debate have been thoroughly covered, so instead, we will focus on the candidates’ comments regarding their plans to repair—or in Mr. Trump’s case, raze and rebuild—the country’s health care system. Unlike with some of the other topics broached during the 2nd debate, both candidates were able to use their speaking time to outline some of their main policy priorities concerning health care and from those priorities it is possible for us to imagine what health care would look like under their respective administrations.

Being a town hall style debate, the question posed to each of the candidates came from a preselected “undecided voter” who asked them what they would do as president to bring down the cost of health care and to make coverage more affordable. The plans put forth by Secretary Clinton and Mr. Trump during their debate responses were studies in contrast not too dissimilar from those of their overall campaigns.

As is her style, Clinton took the opportunity to provide a nuanced, ordered and technical response to the question, acknowledging that while premiums and cost sharing were too high, the benefits gleaned from the Affordable Care Act were so great that it made much more sense to tinker with the existing system than to create a new one outright. Clinton reminded viewers of the indisputable good that the ACA had has done from providing 20 million previously uninsured Americans with coverage and prohibiting insurance companies from denying coverage due to preexisting conditions to mandating that women can’t be charged more than men for health insurance, and allowing those under the age of 26 to stay on their parents’ policy if they have one—all of which would be undone if the ACA was repealed.

During the debate, Clinton spent more time defending the benefits of the existing health care law to the nation than outlining the concrete ways in which she would lower costs. Her remarks on the campaign trail and her stated platform positions suggest she would focus on continuing Medicaid expansion to the remaining states that have yet to implement it, introducing a public option insurance plan, allowing people 55 and older to opt into Medicare, and a laundry list of detailed policies aimed at lowering out-of-pocket and prescription-drug costs.

For his part, Trump stuck with basic Republican party line of “repeal and replace” as the best way to address rising health care costs due in part to the Affordable Care Act. In his response, Trump claimed that, “Obamacare will never work,” and referred to the health care law as “a total disaster” and “outside of defense.” Mr. Trump did not specify what he would replace the ACA with if repealed, but did promise the American people that they would, “have the finest health care plan there is.” He also emphasized his plan to allow interstate competition among insurance companies that would foster more competition and, so the free market theory goes, lower prices as a result. However, recent research on this shows that reducing state boundaries for insurance companies doesn’t reduce prices through competition because it is not so much a given state’s regulatory environment that prevents competition as it is the localized nature of health care delivery.

Aside from his plans to do away with the barriers to interstate insurance markets, Trump’s comments during the debate and the proposals in his platform, are relatively light on concrete policy proposals, suggesting that he has a plan for repealing Obamacare, but no viable plan to replace it. According to an analysis done earlier this year by the non-partisan Committee for a Responsible Federal Budget, Trump’s health care policies would cause nearly 21 million Americans to lose their insurance coverage and would cost at least $330 billion over 10 years to implement. The general consensus among health policy makers is that it is simply not possible to do away with the individual mandate to purchase health insurance and mandate that insurance companies not deny coverage based on pre-existing conditions, as it is the large pool of healthy, young adults who are required to get coverage that enables insurers to take on the added risk of those suffering from chronic and debilitating conditions.

As has been the case throughout their campaigns, both the presentation and the substance of the candidates’ health care plans during the 2nd debate were wildly divergent. For Clinton, that meant an approach that sought not to throw the proverbial baby out with the bathwater and to use a wide array of policies to mend the broken or ailing portions of the Affordable Care Act and improve upon the gains that have already been made. For Trump, it meant blowing Obamacare up and starting again with proposed solutions that were taken in large part from the Republican Party platform.