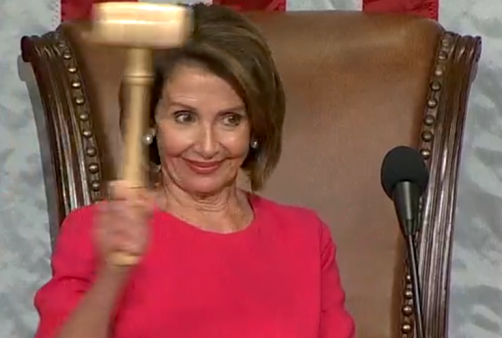 As Congress Kicks Off, Pelosi and Dems Work to End Government Shutdown

Their House bill funds T-HUD, which includes Housing for People Living With AIDS. But will the bill succeed?

It had been 8 years since Rep. Nancy Pelosi (D-CA-12) last held the gavel as Speaker of the House, but the veteran lawmaker showed no signs of rust upon winning the speakership on Thursday, January 3. Within hours of formally being elected to the top leadership position in the House, Speaker Pelosi and a unified House Democratic caucus quickly passed legislation that would end the now 2-week long government shutdown and placing the legislative ball firmly in the court of Senate Majority Leader Mitch McConnell (R-KY) and President Donald Trump.

In a pair of votes that were split almost entirely down party lines, the House passed legislation on Thursday night that would effectively end the current partial government shutdown, funding 6 of the 7 outstanding appropriations measures for the rest of Fiscal Year 2019 and passing a continuing resolution to fund the Department of Homeland Security at Fiscal Year 2018 levels until February 8.

Included in the 6 spending measures passed by the House is funding from the Transportation-Housing and Urban Development (T-HUD) appropriations subcommittee, which includes money for the Housing for People Living With AIDS (HOPWA) Program. Unfortunately, the version of the T-HUD spending bill that was passed yesterday flat funded HOPWA at the $375 million level put forward by Senate appropriators last year as opposed to the $393 million allocated to the program in the original House version of the bill. AIDS United strongly encourages the Senate to fund HOPWA at $393 million in any final spending package.

The success of these bills in the House is not expected to be immediately mirrored in the Senate, as President Trump’s continued insistence on funding for his border wall has emboldened Senate GOP leadership to oppose any spending package that doesn’t include that funding. Senate Majority Leader McConnell has said he won’t schedule a vote on any combination of spending bills that include a clean continuing resolution for Homeland Security without prior authorization from the President, but some rank-and-file members of the Senate GOP are showing a willingness to compromise.

Senator Cory Gardner (R-CO), who is up for re-election in 2020 in a state won by Hillary Clinton in 2016 and which just elected former Democratic Rep. Jared Polis governor this past November, has publicly called for a continuing resolution to end the government shutdown, even if border wall money is not included. Similarly, Senators Susan Collins (R-ME) and Shelley Moore Capito (R-WV) have voiced their desire to see the 6 less controversial spending bills passed in conjunction with a stop gap measure for Homeland Security so the federal government can get up and running again.

While some in the media have downplayed the seriousness of the present government shutdown, the fact remains that it is negatively impacting millions of Americans, many of whom are living paycheck to paycheck or dependent on federal resources for their health and well-being. Hundreds of thousands of federal workers have been furloughed or are working without pay, unable to pay their bills or forced to eat into their savings to get by until the federal government opens and provides them with their backpay, while federal contractors aren’t guaranteed pay for the time they miss.

At the same time, the lack of funding to the Department of the Interior’s Indian Affairs Bureau has left many American Indian tribes who rely on federal funds to operate unable to take care of the populations they represent and serve. This abdication of the federal government’s treaty-bound responsibility to provide health care and other necessary services to American Indians and Alaska Natives is reprehensible and could cause significant harm to tribal members who are living with, affected by, or vulnerable to HIV. Grants to tribal health programs have been suspended and, while Indian Health Service-run clinics are still open, their staff are not being paid. In places that have experienced heavy snowfall—like the Navajo Nation—residents are trapped in their homes, unable to traverse impassable roads to get the food and medication they need.

While it is easy to get caught up in the political brinksmanship of the battle over FY2019 spending bills, it is worth remembering that government shutdowns do not occur in a vacuum and that they negatively impact the lives of millions of people and hamper our capacity to end the HIV epidemic. AIDS United encourages the Senate and the Trump administration to end the government shutdown and provide robust funding for all outstanding programs that impact people living with and affected by HIV. Check back regularly with AIDS United’s Policy Update for the latest on HIV policy and funding.