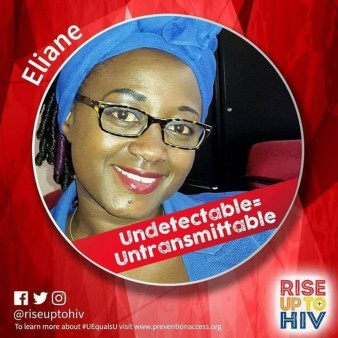 This is a guest blog by Eliane Becks Nininahazwe, Artist, and Director of Indonongo BV in The Netherlands.

Thursday was my final meeting with women and men living with HIV who are Batwa, indigenous people in Buterere, Burundi. The objective was to empower ourselves as we face day by day the Stigma.

During the introduction, everybody did share the story of how he or she did get HIV.I have to be honest their stories were very inspiring. Many men were with their wives so they would share stories from the beginning of diagnosis.

In Buterere they have peer counselors “Abaremeshakiyago.” They help others to get to for HIV test when they suspect that you are very sick. They counsel as well the newly diagnosed Batwa.

These people were not aware of U=U  Undetectable =Untransmittable and their doctor never gave them the information. They were relieved. One woman said that she has been carrying the fear for so long.

These people were not aware of U=U  Undetectable =Untransmittable and their doctor never gave them the information. They were relieved. One woman said that she has been carrying the fear for so long.

They like the idea of meeting once a while as a support group so then the newly infected people who started medication could join and hear their experiences.

We talked about stigma in their community. One man told us how children used to stone him the time he had AIDS. But now since his medication did help he has changed.

Other woman said that they used to point fingers at her "Look she has SIDA (AIDS) but at some the Chief of Village did give an order that whoever will do that again will be seriously punished.

Most of them have old children, they told them very long time. Some of their kids help the mothers to remind to take medication. It’s a small step they have made by coming out to their children.

All 24 people went home happy to start such a support group and be updated information about U=U.

I finished by ASSEJEBA (Association pour la Jeunesse Batwa) where I was honored with a Volunteer Certificate for the work I have done for Batwa Community.

Together we are strong!

* Undetectable = Untransmittable (U=U)*  People with HIV who are on treatment and have an undetectable viral load cannot transmit HIV through sex.

The Lancet proclaims “U=U is a simple but hugely important campaign based on a solid foundation of scientific evidence. It has already been successful in influencing public opinion, causing more people with HIV (and their friends and families) to comprehend that they can live long, healthy lives, have children, and never have to worry about passing on their infection to others. The CDC officially backing the science behind the campaign is another key step towards U=U being the most important message of 2017 in the fight against HIV."

For U=U resources, check out www.uequalsu.org