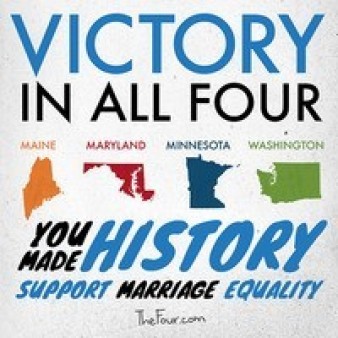 Joy. Pure, impermeable joy. Last night has to rank as one of the greatest moments in LGBT history. Four for four on marriage equality, when most of us had only held out hope for one, possibly two victories. Tammy Baldwin becoming the first out lesbian elected to the Senate. Anti-women, anti-gay troglodytes going down in flames. And the list goes on and on and on.

This election was a historic tug-of-war for America’s soul, with the Tea Party and its fear and hatreds on one end, and gays, blacks, Hispanics, Jews, women -- all those who believe America’s diversity is its greatest strength -- on the other. Our diversity won.

We can now hope that we’ve heard the last gay-bashing in our national elections going forward. We can hope to hear a giant sucking sound from the budgets of hate groups like the National Organization for Marriage. We can imagine a growing list of Republican leaders joining the pro-equality movement. We can see the horizon of what will go down in history as one of this country’s most successful civil rights movements.

With so much hope, we now have a remarkable opportunity. We need to look beyond ourselves, and to embrace the diversity that won last night. For instance, we need to recognize that the same passionate arguments we make for our own rights are almost identical to those made for everyone’s right to healthcare. As happy as I am about last night’s LGBT victories, most of my joy comes from knowing that people with HIV/AIDS, along with all Americans, will see the full implementation of Obamacare, and a chance to improve its flaws in the years ahead.

Obama won, but he’s not off the hook. Where was the discussion of poverty during his campaign? Where was his leadership on the greatest issue of our time, man’s destruction of this beautiful planet with our addiction to fossil fuels?

Our quickest path to full equality is to join others in fighting the good fights, for “a more perfect union,” and a more perfect world.

When COVID-19 Offers an Excuse to Violate Human Rights