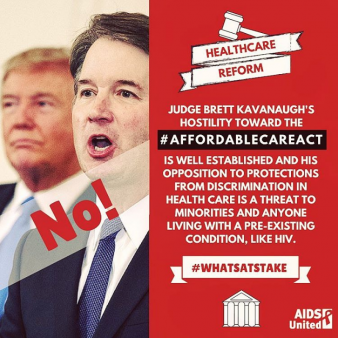 ACTION ALERT: We make it easy to send a letter to your Congress members.

When AIDS United first came out against the confirmation of Judge Brett Kavanaugh to the Supreme Court, we did so solely based on merits—or lack thereof—of his previous judicial rulings and stated opinions on issues that would impact people living with and affected by HIV in the United States.

Upon his nomination in July of this year, AIDS United provided a sober and even-handed overview of Judge Kavanaugh’s judicial history, focusing largely on his opinions concerning the constitutionality of the Affordable Care Act (ACA), his views regarding “religious liberty” and the potential bars to contraceptive access they might bring, and the likelihood that his appointment would place abortion rights in grave danger. In all of these views, Kavanaugh was on the solidly conservative side of the spectrum, falling far to the right of the departing Justice Anthony Kennedy and displaying an ideology no more extreme than any current member of the court.

Had Kavanaugh’s judicial record and past statements displaying his distaste for the ACA and opposition to reproductive rights remained the primary blots on his record, we would have certainly continued to fight against his confirmation as we had with Neil Gorsuch’s a year earlier, duty-bound to do everything in our power to ensure that the health and wellbeing of the HIV community was not put in jeopardy. But, like millions of other Americans who have watched his confirmation proceedings in disgust and abject horror, our objections to Judge Kavanaugh have not remained solely within the realm of judiciary, and our opposition to him will remain unflagging, regardless of whether the Senate votes to confirm him or not.

We at AIDS United have watched along with the rest of the country as Professor Christine Blasey Ford issued her damning and heart-wrenching testimony detailing her sexual assault at the hands of Brett Kavanaugh when they were in high school. We have also watched both the defiant and belligerent testimony of Kavanaugh and the relentless attempts by Senate Republicans and The White House to stifle any credible investigation into the sexual assault allegations of Dr. Blasey Ford, Deborah Ramirez, and Julie Swetnick in an attempt to push Judge Kavanaugh’s confirmation through before any further damaging information about his past can be made public. This level of unapologetic, systemic misogyny and the unwillingness of men in positions of power to acknowledge and believe women who are the victims of sexual assault are both profoundly immoral and unacceptable.

It is abundantly clear to anyone who is willing to look objectively at Judge Kavanaugh’s conduct that he is not fit to serve on the Supreme Court. We agree with the more than 2,400 law school professors who declared in a letter earlier this week that Kavanaugh’s performance in front of the Senate Judiciary Committee “did not display the impartiality and judicial temperament requisite to sit on the highest court of our land.” His comments in his opening statement calling the confirmation process a “calculated and orchestrated political hit” done out of “revenge on behalf of the Clintons” along with his unprecedented public campaigning on Fox News and the op-ed page of The Wall Street Journal demonstrate that Kavanaugh would be incapable of remaining impartial and unbiased on the Supreme Court.

We encourage you to join AIDS United in taking action to ensure that Brett Kavanaugh does not serve on the Supreme Court. Click here to participate in our action alert and send a letter to your members of Congress letting them know that you will not stand for a Supreme Court justice who is so manifestly disqualified to receive a lifetime appointment our nation’s highest court.