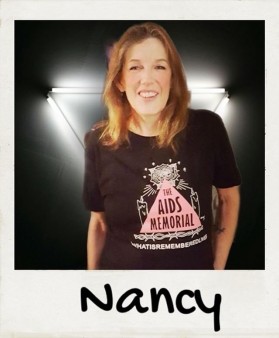 An Interview With Nancy Duncan

To call Nancy Duncan a survivor would be a gross understatement to say the least. She is far more than just that. Diagnosed in 1985 with AIDS and a T cell count of 23—a condition considered a death sentence with no effective treatment options—she has thankfully survived to tell her tale.

A mother of a young son at the time, she faced unemployment and battled one opportunistic infection after another including pneumocystis pneumonia (PCP) before being diagnosed with lymphoma cancer.

Against all odds and determined to see her son grow up into a man, Nancy managed to hold on long enough to witness her health flourish thanks to the advent of effective antiretroviral therapy—but not before harrowingly seeing many of her peers perish to the disease.

. . “Me and my dear friend Jamie, he was the first person I met after my diagnosis in 1990. Sadly, he transitioned to a better place in 1992. I still miss him. <3” - by Nancy Duncan @nan_duncan_ . #whatisrememberedlives #theaidsmemorial #aidsmemorial #neverforget #endaids

And Nancy hasn’t stopped fighting, bravely sharing her story as her way of “giving back” and becoming an activist and educator in an effort to break down the dreadful stigma that still surrounds HIV today. Below is our interview—posted just in time for National Women and Girls HIV/AIDS Awareness Day, held each year on March 10—and throughout this interview are tributes she submitted to the @theaidsmemorial Instagram feed.

Stuart: Nancy, how long have you been HIV positive?

Nancy: I’ve been living with HIV going on 32 years.

Stuart: What’s your advice to those who have been recently diagnosed with HIV?

Nancy: My advice would be that they need not to be afraid. And to expect to grow old. There have been many new advancements in antiretroviral therapies; if taken as prescribed, they can keep people living with HIV healthy and untransmittable for a very long time.

Stuart: What do you think is the biggest misconception about living with HIV?

Nancy: I think the biggest misconception is that some still believe it cannot happen to them because they are not “that kind of person“ or “they’re not that stupid.” Also that HIV has a look and they could tell if some one has it, which we know is so untrue, especially nowadays—we all look very healthy.

. . “My dear friend #DeniseAuffret. She transitioned in 2006. She was a kind gentle woman who had a heart of gold. She always made me laugh and we’d call each other every day. I loved her and miss her very much.” - by Nancy Duncan @nan_duncan_ . #whatisrememberedlives #aidsmemorial #endaids #neverforget #endhivstigma #stigmakills #UequalsU #FactsNotFear #ScienceNotStigma

Stuart: Has your status affected your romantic relationships?

Nancy: At the beginning of my diagnosis I felt as though I would never find love or be sexually active again. I was abstinent for eight years afterward because I was too ill to even think about sex. I then decided to only date HIV-positive men because I was afraid of transmitting it to someone else and also rejection. I now have had an HIV-negative partner for five years who came into my life when I was not looking for it, but it has been a blessing. He has been very supportive.

Stuart: What do you think needs to happen to reduce the stigma around HIV/AIDS?

Nancy: To reduce HIV stigma we must stop using certain terms like “clean” on dating apps. Education is also the best way. If more people understand how HIV is and is not transmitted, I believe, then less will be more fearful of it. I put my face and story out there to show I’m not ashamed of my status. If more could do that, it could help reduce stigma also.

Stuart: Why should people know their status?

Nancy: It’s very important that all people know their HIV status so that they can get on treatment as early as possible to stay healthy and to avoid a weakened immune system. Also, if they know they have, they can become virally suppressed and not transmit HIV to anyone else.

. . “So grateful to still have this pic taken in #Albany 1999. We were in Albany at the governor’s office, advocating in the late 90’s. That’s my late partner #DennisDonnelly who passed in 2008! It was Dennis who got me started on my journey to fight #HIV thru education and advocating as I became healthy again. When he was well, he joined me. I still advocate today for people with #HIV on #LongIsland. I am forever grateful to have had his love and wisdom in my life for 10 years. RIP 8 years in Heaven, until we meet again.” - by Nancy Duncan @nan_duncan_ . #whatisrememberedlives #theaidsmemorial #aidsmemorial #neverforget #endaids

Stuart: How can others show their support of those living with HIV/AIDS?

Nancy: Others can show support to those living with HIV by showing compassion and never judgment. Being part of a “buddy system” to those who are isolated and can’t get out is a great way also. Treat those living with HIV with respect and dignity because we are humans who need love, support and friendship to help us stay healthy mentally and physically.

Nancy: I think that “Undetectable = Untransmittable” [also known as U=U] is great news for people living with HIV. Not only can we live a healthier life, but there is less stress of transmitting HIV. Education, testing, TASP [treatment as prevention] and PrEP [pre-exposure prophylaxis] are all important ways to end the HIV epidemic. And HIV stops with all of us. Until no one has HIV, we all do!