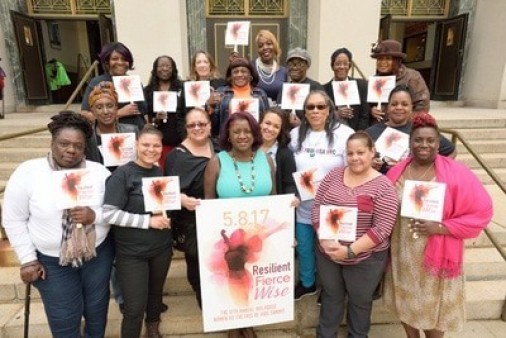 Ingrid Floyd (center) and some of the resilient, fierce and wise women living with HIV who attended the summit Courtesy of Iris House

On May 8 in Harlem, New York, nearly 300 people filled the Bethel Gospel Assembly church for the 12th Annual Iris House Women as the Face of AIDS Summit. Iris House, which has provided services for women living with HIV since 1992, chose this year’s theme, “Resilient, Fierce and Wise,” to reflect the qualities embodied by the women at the forefront of the HIV epidemic.

More than 60 presenters were on hand for the program, which included 15 breakout sessions, a luncheon celebration and a networking reception. Executive director Ingrid Floyd kicked off the summit with welcoming remarks, which were followed by two morning plenary sessions. The first was an update by Georgina Osorio, MD, MPH, an assistant professor of infectious diseases at the Mt. Sinai Health System, on the current status of HIV with regard to women and girls. The second was a discussion titled “HIV Under the New Administration,” which featured panelists from the U.S. Department of Health and Human Services, the New York State AIDS Institute and the New York City Department of Health and Mental Hygiene and was moderated by Matthew Lesieur, director of public policy at Village Care.

Throughout the day, attendees participated in a number of one-hour breakout sessions that focused on topics such as linkage to care, legal services, self-care and advocacy, mental health issues, challenges of long-term survival, peer programs, coinfection issues, PrEP and PEP.

The breakout session “The Intersectional Nature of Youth Activism Today” featured advocates from Love Heals and Mobile Print Power, and focused on the importance of young people and their role in activism. During a discussion between the younger and older individuals in the room about how adults can respect the ideas and opinions of young people, an older participant declared, “You are never too old to learn anything.” Another stressed the significance of being open to the issues important to young people.

At “Transwomen Living with HIV: Addressing an Unjust Burden and Working to Ensure Resilience,” another breakout session, three transgender women activists shared their personal stories about living with HIV and shed light on the many injustices transgender women face, including violence, discrimination and stigma. Panelist Kiara St. James noted, “Trans women are not HIV positive because they are trans. They are HIV positive due to lack of resources.”

The luncheon celebration honored Esther M. Y. Lok, Gina Quattrochi and Linda H. Scruggs for their HIV advocacy. Quattrochi, the driving force behind Bailey House, passed away in December. Iris House board members and staff also surprised executive director Floyd by honoring her for her work. The luncheon concluded with a panel discussion championing the leadership of women that included Raven Lopez, who was featured on the August 1996 cover of POZ.

One of the afternoon breakout sessions focused on a new campaign produced by Iris House, Voces Latina and photographer Duane Cramer that was funded by a grant from ViiV Healthcare. Titled “Love Your Life,” the initiative is aimed at women of color, specifically Black and Hispanic women, and was launched on March 10 during National Women and Girls HIV/AIDS Awareness Day.

With positive messages and vibrant, attractive images, the bilingual (English and Spanish) campaign aims to encourage women to become engaged in HIV awareness and prevention and to address the stigma associated with it. It features women of various ages and races, and serves as a call to action for all women to take personal responsibility for their life and health.

Campaign materials are available for anyone to download at www.loveyourlife.org or www.amatuvida.org. Both Iris House and Voces Latina are working on ways to further spread the campaign’s message, including sending printed hand fans to churches around the city.

The Iris House summit was a fantastic event filled with much needed women empowerment and love. It was beautiful to see so many women and allies come together to address how HIV affects this specific population and what we can all do to help end the epidemic. And it served as a reminder that if we keep up the work we’re doing now and never lose sight of our goal, we can end AIDS.