Twitter
Facebook
Pinterest
Tumblr
Email
Advertisement
YouTube is known just as much for its hateful Comments as it is for its cute cat videos. So of course, the first Comment on my Win Tosh’s Car video is... well, check it out for yourself. 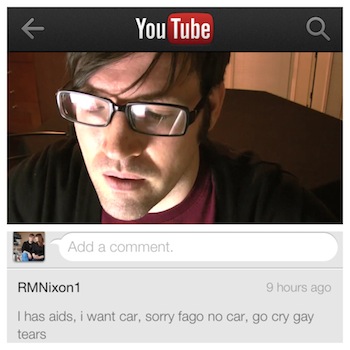 At first glance, it’s just a hateful Comment. But upon further investigation, I discovered that the commenter has a dog in the Tosh Contest race.... literally, his entry into the contest is a video of his dog catching a Frisbee as it jumps into a body of water... so, what does this crude Comment really mean?

It means my video is sending chills down the spine of my competition. I’m seen as a threat- thus the attempt at psychological warfare. This guy figures if he can break my spirit, I’ll take down the video and admit defeat.  Seriously, who wouldn’t be offended by being called a b-rate soda?  But I don’t break so easily!  I’m in it to win it and this only fuels my determination.