Remember all my blogs about the trip to Los Angeles? Well, I finally hooked the camera up to the computer, so check out these photos and vids.

If you read My Pet Virus, you read about my buddies, Josh and Jenny. I took the first photo, and told Josh he looked drunk in it and I needed to take another... I think he thought I wanted the drunk look and, living in L.A., he delivered the goods. 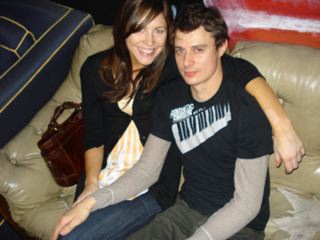 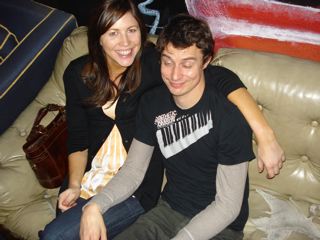 But we weren’t at the Galaxy Gallery just to look pretty. No, we were there to rock! Or synth, or whatever it is I’m doing below. I’m pretty sure that it was having a good time- thanks to Josh for playing the show with me and adding guitar and bass to Synthetic Division for the first time.


Josh D’Elia of The Sane, playing bass on “Nobody Could See This Coming”

To hear a really cool gothic remix of the above song- by JDavyd Williams of IDIL(Gopal Metro is in this killer new band)- click on over to my music site to hear the remix.

Here we are playing “Sign”, which seems to be people’s favorite Synthetic Division song. Big thanks to Kyle Wiggins, as always, for co-writing it with me. On this one, Josh plays guitar and I shake what my momma gave me.

Josh was kindly on loan from his band, The Sane, here we are wearing each other’s band shirts, and below you can hear The Sane rock it out. They are hard to see, because they don’t have a big neon sign. Yet. 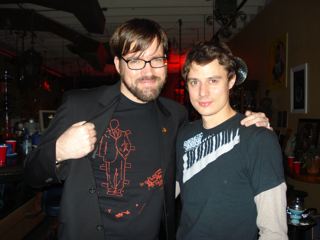 The Sane rippin’ it up at The Galaxy.

Gwenn and I were out in the L.A. to meet with Mitch, the talented writer who is turning My Pet Virus into a screenplay. Christy, who is producing the venture, came out from New York City.


I’m sure, after seeing Josh and I shred it, that Mitch is writing the show into the screenplay. We discussed who would play Josh (remember, Bruce Willis is playing me), and everyone agreed that Don Johnson would be perfect. 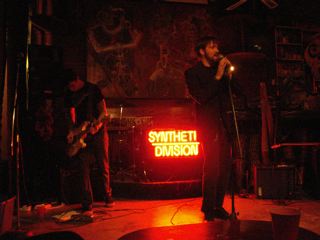 What’s really weird, is that Christy said that once, when she was at work, Bruce Willis came in and sat on her desk... she was really busy, but she thinks he was flirting. I yelled at her, “What?! If you’d slept with him we’d have Willis!”

Of course, this was before she even read My Pet Virus... but I stand by my violent outburst. Mitch was taking notes when this happened, so look for Bruce Willis to really go off as Shawn Decker in My Pet Virus: The Movie.

The magic seeds have been planted in Los Angeles. I love Mitch, and think he’ll do an outstanding job. Of course, any updates will be posted on here in the future. I told Mitch he could throw in a talking hamster if he thinks it will get more investors on board, or replace the HIV storyline with Athlete’s Foot. Then the last scene could be Willis, overcoming Athlete’s Foot to play in front of hundreds and thousands of people with Johnson at the Staple’s Center.

If I don’t blog soon, it’s because I was killed by caterpillars. Seriously, there are hundreds of them outside my home. That, too, would make for an awesome ending to the movie.