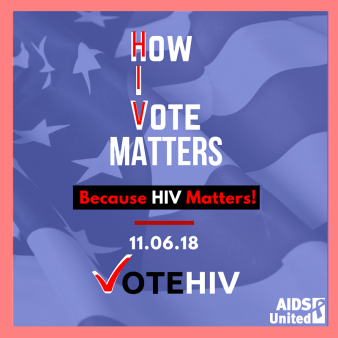 As Midterms Approach, HIV Groups Are Getting Out the Vote

“There is so much at stake in this midterm election.”

In an ideal world, voting for who you wanted to represent you in Washington, DC, and in your state and local governments wouldn’t be all that complicated. Voting should be a very important, but almost second nature task akin to taking out the trash or ordering a package online—something that you have to do, but don’t have to jump through any hoops to get accomplished. In reality, the landscape for many would-be American voters-—particularly voters of color, poor and rural voters and elderly voters—is more fraught with hurdles and red tape than in any point in the last 50 years.

Over in Georgia, where Democratic candidate Stacey Abrams is fighting to become the first black woman to be a state governor, more than 53,000 voter registration applications--the majority of which are from black voters--have been arbitrarily held up by state officials under the direction of Secretary of State Brian Kemp, the man who just so happens to be Abrams’s opponent in the gubernatorial election. At the same time, the ACLU has just filed a lawsuit challenging a dubious “signature mismatch” law in the state that has been disproportionately impacting absentee ballots from black voters and a bus full of elderly black Georgians from a local senior center who were heading to the polls were forcibly stopped by officials in Jefferson County under flimsy pretenses.

These examples of naked, unabashed voter suppression are quickly becoming the rule, rather than the exception, making the work of community and electoral organizers all the more important in the run-up to the 2018 midterm elections and beyond. Fortunately, the HIV community is amply represented in this space, with many members of AIDS United’s Public Policy Council leading the charge for voter rights in their respective communities.

Perhaps foremost among HIV advocacy groups in electoral organizing is Positive Women’s Network-USA, who have compiled an extensive #PWNVotes Election 2018 Toolkit with detailed instructions and comprehensive webinars on everything that people living with and affected by HIV can do to amplify the power of their vote and mobilize their communities to get to the polls.

“PWN has made Electoral Organizing a high priority,” said Waheedah Shabazz-El, PWN-USA’s Organizing Director. “There is so much at stake in this mid-term election and even more in the 2020 election. Electoral Organizing for the general election is timely and is strategically preparing and allowing us to envision what tactics can be scaled up for 2020.”

PWN-USA is going all out to ensure that people living with and affected by HIV are prepared and ready to vote. PWN-USA members have become voter registrars and are collecting pledges from prospective voters, aiding them in the voting process by providing them with non-partisan voter information regarding early voting and absentee ballots, voting with criminal records and ID requirements for 1st time voters. PWN-USA is also working with candidates at the federal, state and local levels to get them informed about issues that matter to the HIV community and figure out where they stand on those issues.

“We are getting some traction with our state level candidate questionnaires and target candidate forums, where we directly engage candidates on issues such as Medicaid expansion, ending HIV criminalization and upholding trans justice and sex worker rights and justice,” Shabazz-El said.

Another AIDS United Public Policy Council member, AIDS Alabama, is taking a multipronged approach to engaging voters living with HIV and their allies ahead of the midterm elections, just as they did during the special congressional race that elected Doug Jones to the US Senate.

“We’re hosting regular phone banking and canvassing events to help get out the vote among systemically disenfranchised communities, assisting clients with obtaining voter ID and restoring their voting rights, and are putting together a nonpartisan ballot guide to help voters stay informed.” said Matt Pagnotti, AIDS Alabama’s Director of Policy and Advocacy, adding that they will also be offering free rides to the polls on Election Day.

For more information on what you can do to engage in nonpartisan electoral organizing to make sure the voices of people living with HIV are heard at the polls on November 6th, check out our AIDS United’s own Election Resource Center, which has been designed to make sure that the HIV community has the tools to be engaged with, informed on, and registered for the 2018 midterm elections. 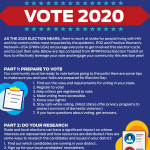