Networks of People living with HIV as a Public Health Solution

I run a network of people living with HIV. I was elected to my position by the group, and I do my best at a role that is largely volunteer, and often takes up a considerable amount of time.

I used to work in a health department, and we struggled with reaching people of trans experience, sex workers, immigrants, people who have been incarcerated and gay men of color. The same systems that marginalize us socially have a difficult time with accessing us for our health care.

In one case study, a health department identified 146 people living with HIV out of care through Molecular HIV Surveillance. Their solution was to contact these people through their partner notification system. Their Disease Intervention Specialists identified 62 people who were still in the jurisdiction and managed to put four (4) into care.

My friend and colleague Larry Walker runs Thrive SS, an extraordinary network in Atlanta. At brunch two months ago, they got 5 people connected to care who had fallen out of it. (Let’s be clear, the budget for the health department’s Disease Intervention Specialist and surveillance teams is far larger than Thrive SS’s entire organizational budget!)

There was a time when groups of people living with HIV were integral to HIV planning. We were acknowledged experts in the field, especially before HIV treatment became an option. Since treatment, our roles have been reduced. We are called “consumers” in the HIV industry and relegated to the clinic, either as patients or “peer support” staff. Outside of a few very visible people living with HIV Executive Directors/CEOs, it’s become something of a rarity to find other people living with HIV in management positions at HIV organizations.

This has become very clear when we look at the “End the Epidemic” plans throughout the United States. If people living with HIV are mentioned at all, it’s about viral suppression and putting us into clinical care. There might be some vague language around Meaningful Involvement of People with HIV/AIDS (MIPA). There is always more time, resources and focus on HIV Pre-Prophylaxis (PrEP). While PrEP is important, I do question why it occupies so much space in End the Epidemic plans.

It worries me that the vast majority of the domestic HIV industry no longer sees our self-determination important enough to resource.

As we enter a turning point in HIV science, I encourage us to think about how important networks of people living with HIV are and how public health would benefit from partnering with us. Imagine if the standard protocol in HIV testing was to connect someone newly diagnosed to a network of people living with HIV rather than a clinic? How would this affect the person’s HIV experience? They would still go to a healthcare appointment, but they would have other people to support them in their journey with treatment, stigma and disclosure. 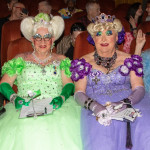