2019 is the year the federal government will build a plan to end the US HIV epidemic. The plan should give justification for increases to HIV appropriations for its implementation. At least that is my thinking in January 2019. As we all know, these are chaotic political times. Our movement needs to navigate and negotiate between real competing realities. 2019 will be a true test of our leadership. Some will be concerned that NMAC is working with the administration. At the same time, delaying efforts to build and implement a plan to end the epidemic feels wrong.

NMAC’s Role in Ending the Epidemic
NMAC leads with race to end the HIV epidemic in America. Race talks about the color of your skin, but it is also a construct used to minimize, discriminate, and make people second class citizens. NMAC uses race to talk about the communities that are disproportionately impacted by HIV. It is the foundation of our fight for health equity and racial justice. 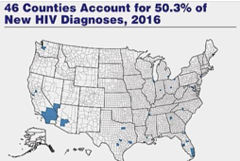 In 2019 NMAC will prioritize People Living with HIV (PLWH) throughout all of our programs and PrEP programming in the 46 jurisdictions that are driving new HIV diagnoses. We are doing this because NMAC believes people living with HIV combined with targeted PrEP programs are key to our efforts to end the domestic HIV epidemic. As the federal government puts together its plan, NMAC will advocate for PWLH first. 46 Counties Account for 50.3% of New HIV Diagnoses, 2016Our number one priority must be to get all people living with HIV to an undetectable viral load. It is good for both the individual and their community. The second priority has to be to implement PrEP programs in the 46 jurisdictions that are driving 50.3 percent of new HIV diagnoses. Given limited resources, PrEP programs should be prioritized in the regions with the greatest need. To achieve either of these goals, our efforts must reach “hard to reach” communities. NMAC and our constituents work and live in those communities. Our place at the table is essential in any effort to end the domestic HIV epidemic.

NMAC’s role in this phase is to be the voice and to fight for those communities disproportionately impacted by HIV. Any plan to end the epidemic must reach those “hard to reach” communities. NMAC’s staff, board, CAPs, and constituents are the communities this plan needs to reach. We live and work in places that are hard hit by HIV. Sometimes it seems like value of community is an afterthought. However, we know it can’t be done without us.

Any effort to end the HIV epidemic in America must happen on a scale that has so far eluded us. To be effective, the federal plan must prioritize people living with HIV (PLWH). Getting them to an undetectable viral load has to be the priority, both for the individual and their community.

According to CDC, in 2019 around 1.12 million Americans are living with HIV and 162,000 are unaware of their HIV status. Half of all PLWH get services through Ryan White care providers and 84 percent of these consumers achieve viral suppression. The other 500,000 either see private physicians or have dropped out of care. According to the CDC, 49 percent of all PLWH are retained in care. Fifty-one percent of all consumers have achieved viral suppression. If we assume that most of the PLWH seeing private physicians get results similar to Ryan White clients, then our challenge is to identify and re-link those consumers who have dropped out or are getting substandard care.

Is re-linking people living with HIV into care and treatment a CDC or HRSA job? How can we re-link and retain 200,000 more PLWH into care and treatment? What are the unique characteristics of the PLWH who drop out of care? What is the number needed in order to bend the curve of HIV transmissions? These are just some of the questions we hope a federal plan to end the domestic HIV epidemic will answer. They are also the reasons community is integral to the solution. The scale alone requires community to be at the table.

Any plan to end the epidemic must include people living with HIV, people of color, women, the transgender community, LGBT community, drug users, and sex workers. We make the plan relevant to the communities it needs to reach. America deserves a real plan that has the additional resources needed to make it happen. A bipartisan effort to increase HIV appropriations to end the epidemic might really happen with the new Congress. Once again, it’s going to take community and the Federal AIDS Policy Partnership (FAPP) to make it real.

U=U and PrEP PrEVENTION in a pill give us the scientific tools needed to end the epidemic. Can these tools be implemented in all the communities that are highly impacted by HIV? We are now in a race to stop an epidemic; however, it is a marathon and not a sprint. Even if we are able to end the epidemic, there will still be 1.12 million Americans living with HIV. Absent a much-needed cure and a vaccine, there will still be a need for HIV services. 2019 will be an important year in the history of our epidemic because this is the year we get a federal plan to end the domestic epidemic. This plan will hopefully be a roadmap to the end.

2019 is my 30th anniversary as the executive director of NMAC. Nobody lasts 30 years in the same job. I am a relic of the past and a symbol of commitment to the fight. The early years of the epidemic taught me to fight and taught me to stand up for my community. Planning for the end is almost unimaginable. This is all I’ve ever wanted. NMAC’s role in ending the epidemic is personal, like it is for many in our movement. My tenure is justification for NMAC’s leadership role in ending the epidemic. The agency sits in a very unique position because of our years of service and stability. We were there at the beginning and, hopefully, we will be there at the end.

Mark your calendars now to discuss at the United States Conference on AIDS September 5-8 in DC and/or the 2019 Biomedical HIV Prevention Summit in December in Houston. These will be opportunities for the community to discuss, debate, and maybe get some agreements about the best ways to move forward. 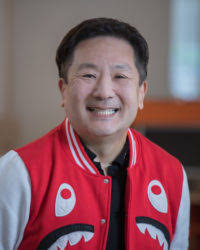