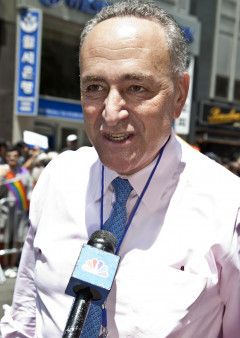 Chuck Shumer and other elected officials love to show up at Pride. But what do they do for us? lev radin/Shutterstock.com

Post-Pride: Reflections on notions of “success”

We’ve finished Pride season (I now live in San Diego so now my Pride is later than what I’m used to). Globally, Pride is everything from small political marches to large scale corporate-sponsored spectacles. I’ve been to both. I question those who see corporate-sponsorship and extensive police presence as “success.” In San Diego Pride, there is a litany of law enforcement groups marching - the FBI, the police, the sheriff, the DA - and when the police thought it would be fun to blare their sirens in the parade this year, I watched a group of people of color as we visibly flinched. For many of us, the siren is not a hopeful sound.

I heard a group of cis-gendered White women (I assumed heterosexual) comment “that’s so cool - the police are at Pride.” An older White gay man corrected them with a history lesson of how many times the police hassled him in the early 1980s in San Diego gay bars.

When there’s money and good PR involved, I wonder at the cost of inclusion. Who do we want to feel comfortable and at whose expense? To my old-fashioned self, inclusion and diversity are the glory of the queer community. The leather queens, the Dykes on Bikes, the trans groups, the bears, young people and senior people, people living with HIV, throngs of racial diversity … to me, this is Pride. I don’t really care what company sponsored the stage.

Diversity and inclusion are more than just words. They are ideas about who we are, what we could be, with whom we want to sit, how we want to be treated. They’re not perfect or static or finished. They’re dynamic and a process and, to be honest, uncomfortable. The distance we have from where we are to where we want to be.

Michael Warner’s The Trouble with Normal came out in 1999 and its main critique remains important today. Warner argues that normativity (e.g. the desire and impetus for some socially created category of “normal”) has a damaging impact on the gay community – particularly in regards to the rules we create around self-expression and sex. In other words, the idea of “normal” is deeply embedded in society and is used to dominate other ways of being. It causes shame when we don’t fit (and we can’t).

Take a look at how often people talk about things being “normal” or “not normal” when they are really talking about their discomfort or being judgmental. “That’s not normal” is often means for “stop doing that” or “I’m not used to that and it makes me uncomfortable.” It’s cloaked within the guise of some sense of social propriety or a mythical consensus.

I have seen people twist themselves sideways trying to be “normal.” They strain against their sexual pleasures, the kinds of work they want to do, even hide away their interests for fear that it will mark them as “weird” or “abnormal." How many people talk about their desires honestly? Or their dreams?

The other day, my friend Ariel Sabillon texted me “decolonize your mind/body” and I responded “decolonize your needs/wants/goals”. We were talking about how some self-righteous parts of our community will do the most heinous damage in the name of “the community”. We recognize that most of the values about ourselves, what we do in the world, how we measure success and failure are based on cultural values that do not (and will never) serve us. He is from an immigrant family, mine are refugees. Both of us are openly gay, involved politically and living with HIV. A husband, children and a house in the suburbs are not our signs of success.

One of the lies we have about the world is what success looks like. Our visions of success are often about money, fame, beauty, and happiness. While these all are rooted in useful ideas, they quickly spin out of control.

I used to believe in these things – and I used a lot of crystal meth to manage the distance between what I thought of as “success” and the reality of my life in this country.

I grew up in a family where alcohol was part of managing a hard world. Whether succeeding or failing, drugs and alcohol softened the blow. I have gone to AA meetings, worked the program, and have come to a balance with the kinds of drugs and alcohol I choose to engage in. All while I completed bachelor’s, master’s and doctorate degrees. Some would disengage the two realities – the substance use on the one side, and the academic degrees and career on the other. As if the degrees and professional accomplishments were signs that I had overcome the substance use and were therefore the result of this “success”. But it’s not so simple.

In Jamie Cortez’s Sexile, Cuban trans activist and performer Adela Vazquez remarks,“[s]ome days I felt like the pain was going to swallow me up. I had this pain of being an exile, a transgender and a sex worker. If I didn’t take drugs, I would have been lost or maybe dead.”

We come marked by identities and, quite often, injuries. We are broken; but we can have each other – if we can allow space for all of the trouble and life we bring. I don’t pretend to have some kind of perfect life; I don’t expect others to either. I hold tight when I meet folks who are honest about their flaws and their fierceness. I want a politics of gathering together and partying in our myriad diversity to share in our victories and traumas. This, to me, is a kind of success.