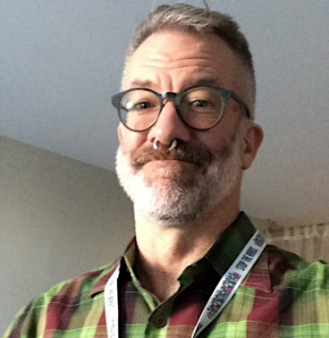 The following is a guest post by Eric Jannke of Let’s Kick ASS Palm Springs, published in coordination with National HIV/AIDS and Aging Awareness Day (NHAAD), held each September 18 to call attention to the challenges that older Americans face in terms of HIV prevention, testing, care and treatment.

I grew up assuming a lot of things about the world. Like there would always be health. That was such a deep assumption that I didn’t recognize it as one until it went away. Maybe that’s how it generally is, we notice the absence of things we’re accustomed to.

But it did go away, my health. I was careful, but somehow got HIV anyway. I honestly don’t know who or how, and have always been grateful for that. No blame. Life happens.

I ask a lot of questions. I want to know other people’s thoughts. The world I grew up in, there was one right way to do just about everything. The world I know now has many right ways, or no right ways, depending on how you look at it. I asked people their thoughts about HIV & Aging. What was most important?

Before 1996, when HIV infection was a certain death sentence, we all developed survival strategies. It’s hard to believe they worked since so many people using the same strategies died. Having a positive attitude was one of those strategies. Somehow we were encouraged to experience beatitude through the hell of this illness. It encouraged us to look inwards, some said. “You have to understand that it is a gift,” we were told. “A gift,” said one friend. “If it’s a gift, I want the receipt. I’m taking it back, and I don’t want anything else they have.” And now, 30 unexpected years later, someone says to me positive attitude. We talk, and agree that if nothing else, it makes living easier. Staying mostly positive doesn’t happen by itself. It happens because we make it.

I’m part of the leadership for a group called Let’s Kick ASS Palm Springs. ASS stands for AIDS Survivor Syndrome. You don’t have to be HIV positive to have it. Think of it as a variation of PTSD (post-traumatic stress disorder). It is a very real thing.

Watching your friends die—tens, dozens, hundreds of people you have known and cared for—it screws with you. As a young man, I moved to San Francisco to be part of a community and to fit in somewhere, but when I got there I found that the community was busy dying. Everyone close to that community, infected with HIV or not, was traumatized by the magnitude and horror of the loss.

It isn’t a pretty way to die. One friend had more than 70 perforated ulcers lining his digestive tract, starting in the back of his mouth, down his esophagus, ending inside his rectum. It took him two years to die, even with all those holes. I would stand with him on the fire escape, keeping him from blowing away in the fierce winds, so he could have a cigarette. He didn’t get to age with HIV. I’ve been infected longer than he was ever alive.

Readily visible in our community are isolation, depression, a struggle to find meaning. People are isolated because they have lost so many of their friends. They are isolated by their own physical limitations. They are isolated by poverty. Many of us had to leave careers that were just getting started, freezing our incomes at that level. What was a livable income in 1994 is significantly less so in 2017. We stopped work because we had to. We were dying. I know people who were ordered to go on disability by their boss, compassionately, who refused to let them die at work. Then some of us didn’t die. And then we realized that we weren’t going to die of AIDS after all, that the new drugs it was so hard to believe in were actually working.

Today, our Kaposi’s sarcoma lesions are mostly gone, replaced by more common skin cancers. AIDS is gone, now classified as stage 3 HIV infection. HIV no longer means get your affairs in order, make peace with the world you have known and be ready to leave it, uncomfortably. Now we are living with a manageable chronic illness, and living means aging. It can mean aging with an immune system that never fully recovers. Some of us spent too long with single digit T-cell counts, and that measure of immune health will never go into a truly healthy range. The best we can do is get out of the “you will die from every passing infectious agent” range. Some of my friends won’t travel by air anymore. Others travel with antibiotics for the inevitable bronchial infections contracted on planes.

Last week I traveled with my box of antibiotics to the United States Conference on AIDS (USCA), representing Let’s Kick ASS Palm Springs. I was lucky enough to get an HIV 50+ scholarship, and the National Minority AIDS Council covered all my expenses. We had a day of visits to Capitol Hill, asking for continued funding to support HIV research and existing programs to prevent more infections. We were a bunch of people in varying stages of infirmity, reminding the world that we still exist, we still need care, and that we don’t want anyone else to go through this. If we can pull that off, our lives will feel worthwhile.

HIV research is human research. We all have immune systems, and we know a lot more about them because people, scientists, have dedicated their lives to chasing tiny bits of answers to questions we barely know enough to ask. Because of their dedication we have fewer AIDS-related deaths now, but fewer deaths also means more people living longer and growing older with HIV. Even on our meds, aging with HIV means dealing with a host of co-morbidities (independently diagnosable conditions associated with aging) possibly decades before they would typically become issues for people not infected with HIV. HIV specialists are becoming gerontologists not because they want to, but because they have to. It’s difficult to untangle causation from correlation in all these issues. Is it the HIV itself or side effects of the medications? Is 50 the new 75, and what about long-term inflammation?

Talking about HIV and aging means talking about how we achieve, or do not achieve, health care in our society. It means talking about poverty. About race. And gender, and sexuality. None of these are comfortable topics for most Americans. But there is no logic to support continuing silence. While we don’t talk, people are still being infected, at all ages from adolescents to octogenarians. This is morally unacceptable. It’s also expensive. It’s expensive to stop the epidemic, but it is so much more expensive not to.

To read more in POZ about the United States Conference on AIDS (#2017USCA), click here. And to read more about National HIV/AIDS and Aging Awareness Day (NHAAD), click here.