Music and HIV are entwined for me, having landed in my lap around the same time. Here’s why I’m closing a beloved chapter in that life link.

This Saturday I am playing my final Synthetic Division show. It’s a continuation of a series of themed shows that Gwenn and I put on with our friends, where 80s music is spun, stranger live electronic music is performed... decorations of the weird and whacky world of Stranger Things adorn the venue. It’s just a fun night. The first one we did was for Season 2 in 2017. Then again in 2019 for Season 3...

For those two shows I dressed up as Dr. Martin Brenner, who is masterfully played by Matthew Modine. Who I got to meet in person the fall before Covid would change all of our lives. We discussed that most people think that Dr. Brenner died. I knew differently. Matt didn’t say he was in the upcoming season, he’s been playfully engaging with fans on Twitter ever since his character was written off at the end Season 1. 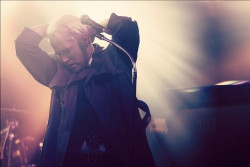 Well, Brenner is in the trailer for Season 4, and now that he’s back I’m dressing up as an employee of Scoops Ahoy, the beloved fictional mall ice cream shop. This is where the characters Steve (Joe Keery) and Robin (Maya Hawke) work. Spoiler Alert: The Season 3 story arc of Steve and Robin’s relationship is one of the best things in Stranger Things, as is the story behind the story. A flirty friendship between the characters that was originally written to culminate when Steve professes his love for Robin and they are finally together instead ends in a more compelling way when Robin tells Steve that she is gay. 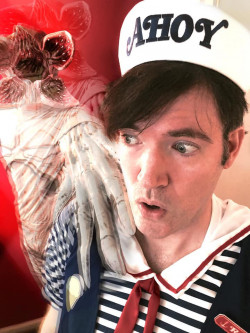 Their conversation, and the heart behind it, makes your forget about the science fiction and peril that surrounds them. It’s just two humans, sharing their truths and sorting out what that information reveals. It’s beautiful, and the actors had a hand in what would ultimately end up on screen. I had to fanboy out over their guts to suggest a better ending, and for the creators to run with the vast improvement. My  admiration for the Scoops Ahoy duo, combined with Modine’s return as Brenner, made my costume choice an easy one. MY SHOW SPOILER ALERT: Plus my friend, Jason Elliott, has agreed to be a sexy demogorgon intent and is highly favorited on all betting apps to end Synthetic Division once and for all!

Oh, and another easy choice?

Making this show my last.

It is the closing of a door on one of my longest continuous journeys- from discovering the perfect band name in Algebra I pt. 2: Electric Boogaloo in Waynesboro High School to all of the great times I’ve had performing in front of the neon sign. The story of what I’ve called myself musically- Synthetic Division- runs from 1992 until 2022.

I’ll do my best to elaborate on why such a definitive decision like this feels right...

My love of music, puberty and being diagnosed with HIV all landed around the same time for me. My original “HIV meds” were the alternative nation therapy of discovering and listening to my favorite bands- Depeche Mode and the Cure among the most recognizable. In 1990, I got to meet Depeche Mode through the Make-A-Wish Foundation, and standing in the presence of what I deemed to be all-powerful wizards left quite an impression. I put the picture of myself with the band up in my locker, where it remained through my entire high school saga. In my darkest moments post-diagnosis, music helped me have the conversations with myself that I could not yet have with others... (“Until there’s a cure... there’s The Cure.” - Garth Harkness McMurray) 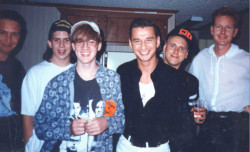 Meeting Depeche Mode with my best friend during the two hardest years of my life, and Demonic Doves bandmate, Mark Roys.

As far as songwriting magic goes, over time I got more comfortable around my own synths. I started meeting and becoming friends with musicians- wizards conjuring their own gems, using a combination of raw emotion and intricate technique.
I played my first live show as Synthetic Division in 1994, at The Nsect Club in Norfolk. I wasn’t singing yet, I just hammered folks with some experimental looping. Performances like mine could be why the club closed down after 20 months. But I was thrilled afterward- it was a huge step for me at the time, and I was proud to have taken the leap.
In comparison to that leap, my life took a long distance jumper’s Olympic medal-winning effort when I opened up about HIV two years later. That all took off in a way that I’d only dreamt about happening with my music, which was of course far from ready for the magazine cover and appearances on MTV HIV educational programming that my advocacy had landed for me.
As a result of the response to how I choose to tell my story, music took a bit of a backseat. I threw myself into writing- a love I never knew I had until I disclosed my status publicly. Blogging, making other friends online who were living with the virus and speaking up about my experiences living with HIV was where it was at, baby!
That was the best decision I’ve ever made- to open up about something I thought would always be a private matter. I always say it wasn’t really a decision. The harder thing at age 20 would have been to remain silent. My head and heart were in sync, and I listened to that.
When I circled back to my synthesizers things were a little bit different. My instrumental electronic jams were more cohesive. Less experimental. There was an ease to songwriting that hadn’t been there before, even though things were still a bit choppy. And soon enough, I wasn’t as fearful of the mic. Just dial up that reverb and I was good to go.
With my new attitude about HIV, I wasn’t afraid to let some of that enter the safe space that was my music. When Gwenn and I first met, I actually sang one of my new songs for her in my music room. Awkward, yes. But I was being brave once again. Doing something I never thought I would or could do.
Even though Synthetic Division’s official start is the band name in 1992 and a CD I did in 1993 called Monument- my senior class project- things really got cookin’ in 1999. I’d just moved to Charlottesville, Gwenn and I were official... and I was ready to pursue music for real, figuring that if I could tell my life story in front of people then I could sing my stupid songs in front of them, too.
Using the wide lens on things can really help sometimes, you know? 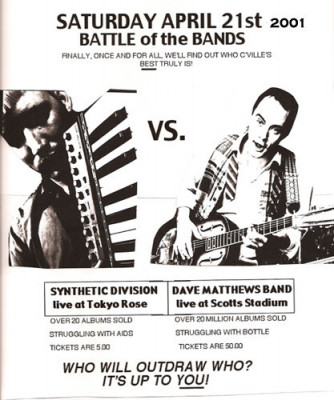 When DMB played their first hometown show since mega-stardom, I booked one on the same night at Tokyo Rose. These flyers were posted around town. (I got squashed like a grape but received a Purple Heart Award from C-VILLE in their post-DMB show issue.)