Director Matthew Puccini talks about his film short “The Mess He Made.” The results aren’t what you expect.

The description of The Mess He Made sums up the film short as this: “A man waits for the results of a rapid HIV test in a small-town strip mall.” Sounds straight-forward enough, right? And yet this 10-minute tale is unlike any other HIV-testing scene I’ve ever seen, for reasons … well, you’ll just have to watch to find out.

So go ahead and click on the video above.

Did you view it? Great. Because I’m now gonna talk with writer/director Matthew Puccini about his superbly directed and acted The Mess He Made, and our conversation reveals a lot of the plot points, as in all of them. So …

The Brooklyn-based, Bay Area–raised filmmaker’s latest work premiered at SXSW, has screened at more than two dozen festivals and is shortlisted for the international Iris Prize, which awards excellence in LGBT cinema.

The short, which stars Max Jenkins, screens Sunday, October 22, at NewFest, New York’s LGBT film festival, as part of a collection of shorts titled “Queer + Positive.” It will also screen at the Twist queer film festival in Seattle later this month and the 24FPS Festival in Austin in November.

Below is our interview.

Still from Matthew Puccini’s “The Mess He Made”

First off, Matthew, what compelled you to tackle the subject of HIV testing?

A close friend and I both had HIV scares last summer, and felt afterward that we wanted to make something that captured our emotional state during that waiting period. It’s such a tense, surreal moment, and there was something immediately interesting and challenging about translating that into film.

What are your goals with the film?

More than anything, the goal is for viewers to walk away with a sense of newfound empathy. The hope is that someone who’s never been through an HIV test can watch this film and, afterward, have some inkling of what that situation looks and feels like. For those who have been through an HIV test, the hope is to accurately capture that experience in a contemporary way, that reflects all of the medical advances and work that has been done to address HIV stigma in our culture. We tried to avoid making any sweeping statements about the modern gay experience, and instead focused on recreating this very specific ritual, with a very specific character, and making people feel compassion for that.

How have people reacted?

The reaction has been positive! I’m so relieved about that. Particularly at the LGBT festivals we’ve screened at, like Frameline, it was validating to have our queer audience members affirm that the film felt accurate to their own experience. People really respond to Max’s performance, and have seemed appreciative of the less melodramatic approach we took.

Although I hate to give away any spoilers in our Q&A, we don’t have that luxury because I’m really curious about some of the choices you made. Unlike a lot of HIV shorts, yours doesn’t include any educational bits, like a nurse spelling out HIV-related information. In fact, I don’t recall “HIV” ever being stated. Can you tell us about that decision and what you hope it conveys?

I think having a nurse spelling out information would have distracted from the claustrophobic, limited point-of-view we were going for. The goal was always to create something immersive and character-based; we wanted to really put the audience in the headspace of someone who is in this situation. I know I always appreciate as an audience member when things aren’t completely spelled out for me; I pay more attention when a film trusts me to come to my own conclusions. 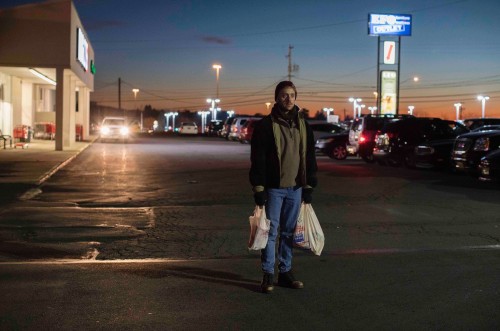 Max Jenkins in “The Mess He Made”Courtesy of Jacqueline Harriet

Similarly, walk us through your choice to not give viewers a clear-cut ending in terms of the test results.

The hope is that keeping the ending ambiguous forces you to focus on the performance, and the raw emotion of it—you’re studying Max’s face so closely in those last 30 seconds to figure out what happened. And, as you’re guessing, you’re being forced to reconcile with your own preconceptions about how someone would react to being HIV positive or negative. Is he crying because of the results, or out of relief? Or is it because he’s ashamed of the decisions that landed him here? I spoke to several nurses who frequently administer these tests, and the reactions they’ve seen really do run the gamut. This felt like the best way to honor that, and to maintain our original intent of making this a very closely observed character study.

Finally, what is your personal relation to HIV advocacy? For example, is any of the content in the film based on your real-life experiences?

The inspiration for the film came from real-life experience, but the specifics of this character’s situation are all fictional. That said, he’s definitely pitted against so many of my own personal demons as a gay man. During my rehearsals with Max, we talked extensively about how it’s a goal for both of us to exorcise gay shame in our work, and this was definitely as therapeutic of a filmmaking experience as I could have ever hoped for.

I did extensive research to make this film and to be able to talk about it, but I’m still at the beginning of where I’d like to be as an HIV advocate. My hope is to get more involved in the HIV-positive community, to start volunteering at my local CBO, and to really make the film available everywhere as a conversation piece. It’s an issue that’s so close to my heart; this is only the beginning of my involvement.