What is fair cannot be based on white privilege.

A white gay colleague recently shared his concerns about speaking out and not getting canceled. I appreciated his courage and honesty. This is a difficult time. Between COVID, Black Lives Matter, the Jan. 6th insurrection, and climate change, the paradigm is shifting, and we are still working out what that means. There are no clear rules and that can be scary.

Last year, white America woke to the over policing of Black people through the killing of George Floyd and too many others to name. What happens when something is unfair to people of color but needed in white communities? This is the paradigm shift that America is working to answer. In our fight to end HIV, PrEP users are 75% white, yet the majority of people living with HIV and the majority of new cases of HIV are among people of color. PrEP is reaching gay white men, but not gay Black men. What does that mean?

I remember talking with a white straight cisgender male federal official who told me he had the answers for ending the epidemic. Yet his leadership brought no changes in the outcomes. What happens if we end the HIV epidemic in white America while HIV continues for people of color? Some might say the fight is over and we won.

To my white friends, here is how I navigate these challenges. As an old fem Asian cisgender gay man and the executive director of the agency formerly known as the National Minority AIDS Council, I am professionally aware of the privileges and discrimination that goes with how I present myself to the world. Part of my job is to hold-up communities that are often overlooked or undervalued. Most of my job is to listen and learn from those communities.

When I am in spaces for African Americans, Latinx, American Indians/Alaska Natives, women, the transgender community, people living with HIV, then I shut the fu** up and listen. When I am in spaces for people of color, Asians, LGBTQ, or the general HIV community, then I fully engage and feel a responsibility to bring my perspective to the table. It’s been my experience that most people get in trouble when they try to fully engage at tables not meant for them. My experience of too many white people, especially cisgender white heterosexual men, is they believe all the tables are set for them because mostly they are.

Privilege is taking all the oxygen out of the room. I purposely use my privilege in rooms full of white people. I want them to understand that they are not the only important voices. It took me a long time to get comfortable, some would say too comfortable, with this privilege. As an Asian man, it was not something that came naturally. In the world of HIV, it is a very important skill. It is difficult if not impossible for many of you to understand what it means to present as white, yet it is something that every person of color intimately knows. Our value depends on how we present ourselves in the world. The closer we show up as white heterosexual men the better. For most of us that is impossible, yet that is the gold standard for power and wealth in America.

COVID has made us insane, and I think it is the catalyst for this paradigm shift. The virus has made us rethink everything. If this is my new reality, who do I want to be? Where do I want to live? How do I want to present myself to the world? For some of us, it will change the way we work. Are you willing to commute 90 minutes to and from work? I could never have imagined NMAC’s staff would primarily work from home, yet that is what we do.

COVID, Black Lives Matter, the Jan. 6 insurrection, and climate change have forced a reckoning. We can probably end the HIV epidemic in the white community by 2030, but if we stay on the same course, I have real doubts about ending HIV in communities of color. This is my pledge to the HIV movement: what is fair cannot be based on white privilege. Our work must embrace the challenge of what is fair to communities who have lived under generations of discrimination and oppression. This is bigger than change; it is a shift in the paradigm. Ending the HIV epidemic in America starts by re-looking at what is fair.

God is Love and Love is for Everyone, 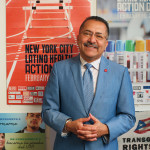