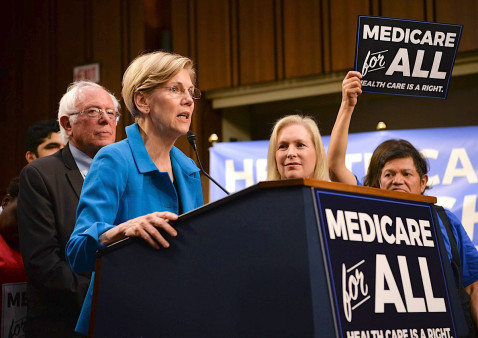 Senator Elizabeth Warren co-sponsored the Medicare For All bill.

Whose Health Care Plan Could Dominate the 2020 Election?

A look at the competing initiatives, including Medicare for All.

There are few things that can be said with any degree of certainty about the 2020 election cycle that is already well underway, but one thing that is for sure is that healthcare will play a significant role in determining which candidates come out on top. American voters have consistently listed healthcare as their top priority when heading to the polls, and the 2018  midterm elections were just as much about the direction of healthcare policy in the United States as they were a referendum on Donald Trump’s presidency.

In direct contrast to earlier elections where Republican politicians used antipathy towards the Affordable Care Act to turn the political tide in their favor, Democrats took back the House of Representatives from Republican control in 2018 by attacking incumbent GOP members of Congress for trying to dismantle the ACA without a viable replacement. According to exit polling from The Washington Post, 42% of voters in 2018 battleground states listed healthcare as their most important or second most important issue, and of those voters, a staggering 77 percent voted for Democratic candidates.

While these numbers bode well for Democrats heading into 2020, they do obscure a growing rift within the party over the future of healthcare in the United States. In the 2018 midterms, Democratic success hinged on the campaigns of more moderate Democrats in battleground districts who, by-and-large, ran against the GOP’s desire to repeal the ACA, while advocating for incremental changes to the current system. And, while there were many House Democratic candidates who ran on platforms championing a total overhaul of the U.S. healthcare system through some variation of the Medicare For All/single-payer model, they were almost exclusively in districts that were already solidly Democratic. The dynamic in the run up to the 2020 elections will be markedly different.

For the next 16 months, the attention of the national political press will be honed in on the Democratic presidential primary and – by extension – the policy proposals of an ever-expanding group of presidential hopefuls, many of whom are considerably more progressive and left-leaning than freshman representatives from purple swing districts who helped deliver the House to the Democrats in 2018. It will not be enough for these candidates to simply rebuke President Trump and Congressional Republican leadership for their repeated attempts to repeal the ACA without a viable replacement. Winning the Democratic nomination is going to require a comprehensive healthcare policy platform that either builds upon the gains of the ACA or completely upends the country’s market-based healthcare system and replaces it with a single-payer model.

We are already seeing new legislation in Congress that will serve as blueprints for these presidential healthcare policy platforms, some even being introduced by the candidates themselves. On Wednesday, Senator Bernie Sanders (I-VT) introduced a new version of the Medicare For All bill that was at the heart of his 2016 presidential campaign. Like his previous Medicare For All legislation, this bill would create a universal Medicare program that would provide all Americans with a comprehensive package of benefits that would cover hospital visits, primary care services, medical device fees, lab services, and prescription drugs. New to this iteration of Medicare For All is coverage for long-term care services for individuals living at home or in a community setting, putting it on par with the House version of the bill released earlier this year and sponsored by Representative Pramila Jayapal (D-WA-07). The legislation was also co-sponsored by several other Democratic presidential candidates, including Senators Elizabeth Warren (D-MA), Cory Booker (D-NJ), Kamala Harris (D-CA), and Kirsten Gillibrand (D-NY).

Nothing in the Medicare For All legislation itself specifies how the federal government would pay for what would be one of the most robust single-payer healthcare plans in the world, but in a separate document, Senator Sanders’ office outlined some possibilities on how to fund the program ranging from instituting a 4 percent income-based premium to be paid by employees, (exempting the first $29,000 in income for a family of four) to making federal income and estate taxes more progressive to shift the burden of cost to wealthy Americans.

Under the Medicare For All plan, all forms of private and employer-based health insurance would be eliminated, as would all other federally funded insurance plans, with the exception of those run by the Veterans Administration and the Indian Health Service. There have been no indications thus far as to how Medicare For All would impact the Ryan White HIV/AIDS Program, but given the fact that Medicare for All would pay for some of the costs currently addressed by the Ryan White Program, like cost-sharing assistance and lab fees, some changes would be likely.

In contrast to the proponents of Medicare For All, some more moderate members of the Democratic Party are advocating for policies that would incrementally change our current healthcare system rather than radically overhauling it. Senators Tim Kaine (D-VA) and Michael Bennet (D-CO) recently reintroduced their Medicare X Choice Act, which would provide for the creation of a public option – like the one that was originally included in the ACA – allowing Americans under the age of 65 to purchase a Centers for Medicaid and Medicare-run health insurance plan on the ACA’s individual and small business exchanges.

For those candidates looking to take a progressive stance while not overturning the entire private health insurance market, there is the Medicare for America plan, which was introduced at the tail end of 2018 by Representatives Rosa DeLauro (D-CT-03) and Jan Schakowsky (D-IL-09). The Medicare For America plan would theoretically guarantee universal health coverage while leaving employer-based insurance plans intact and allowing private insurers to continue offering Medicare plans as they do now through the Medicare Advantage program. The primary downside of Medicare For America is that some of the cost-sharing elements of our current healthcare system would still be present. Unfortunately, as a mechanism to ensure that individual states pay their fair share, the Medicare for America plan would punish any state that doesn’t adequately pay into the system by making them ineligible for Ryan White HIV/AIDS Program grants.

While there are a plethora of different ideas among Congressional Democrats on how to improve the nation’s healthcare system, Republicans in Congress have produced no new plans for healthcare reform since their failed attempt to repeal and replace the ACA. After President Trump’s claims that the Republican Party would “soon be known as the party of health care” following the Department of Justice’s unprecedented decision to support a federal court ruling that would undo the ACA, Congressional Republicans made it very clear to President Trump that they do not have the appetite to push sweeping new healthcare policies over the next 2 years. President Trump’s Chief of Staff, Mick Mulvaney, has said that The White House will be releasing a new healthcare plan “fairly shortly,” but little is known about what that might entail.